Civil Employee Files of the Ministry of War

Ah, Dear Readers, forgive us, please for not resurfacing 'til now. We are still in a swoon after a glorious week deep in the military archives in the Service Historique de la Défense in Vincennes. We have discovered the wealth and delightful detail of genealogical information in the personnel files on civil employees of the Ministry of War. They date from 1806 to 1853 but include information about much earlier events in peoples' lives. Nearly all contain a pension calculation form with basic details such as date and place of birth, when the person joined the Ministry, positions held and salaries, spouse's name, date of death and possibly a widow's application for the pension. Additionally, they often contain copies of baptism records or birth registrations, date and place of marriage and the spouse's full name, copies of the employee's death registration, certificates of prior employment, reports about the employee, and some delightfully intriguing correspondence.

We were researching some men who began at the Ministry in the 1790s, during the Revolution, a notoriously difficult period, when people moved about a great deal, wars raged, the émigrés left, and documents were lost or destroyed. Each had, later in life, become a member of the Legion of Honour, and we had already found each man's file, so we knew some basic details. The Legion of Honour files, however, usually give just the reasons that justify the person's membership, such as service or heroism, birth and possibly but not always death dates, and proof that the member paid his or her dues.

These personnel files, however, get us very close to being able to put together a biography. The pension form shows the employee's service, his wife's name, her date and place of birth, their date of marriage, his date of death, and at the bottom, her date of death, as in these two examples. 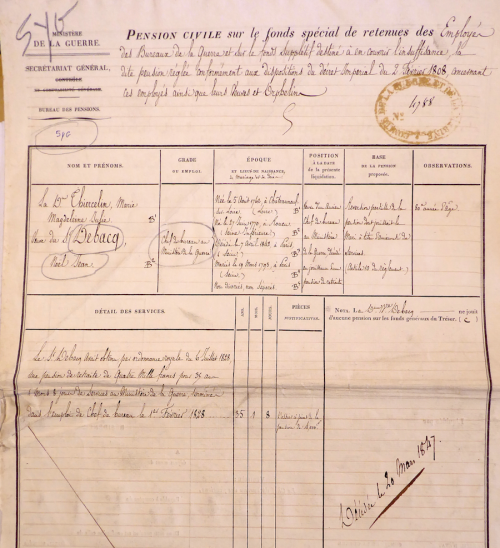 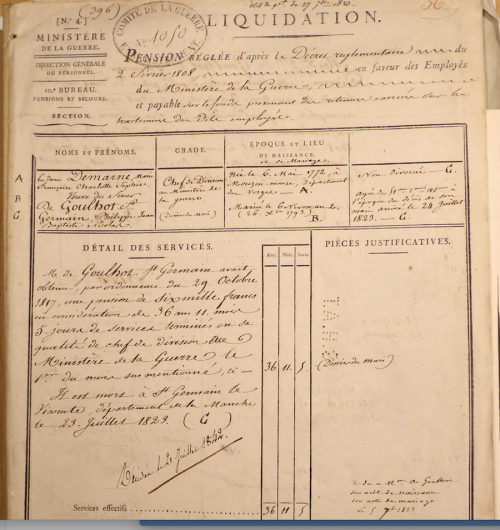 There are, of course, many letters from the employee requesting a pay rise and describing the good work he had done to merit it. These usually have notes as to approval or rejection in the margin.  Much more revelatory are requests to borrow money and the reasons given. In this example, the employee had a large family and an elderly mother to support. He had found a job for his son in the Ministry but now that son was to marry and his father could not quite cover the wedding costs. He wrote asking to borrow money from the Ministry. Happily, his request was approved. The exchange tells the researcher the son's name, employment and approximate date of marriage. 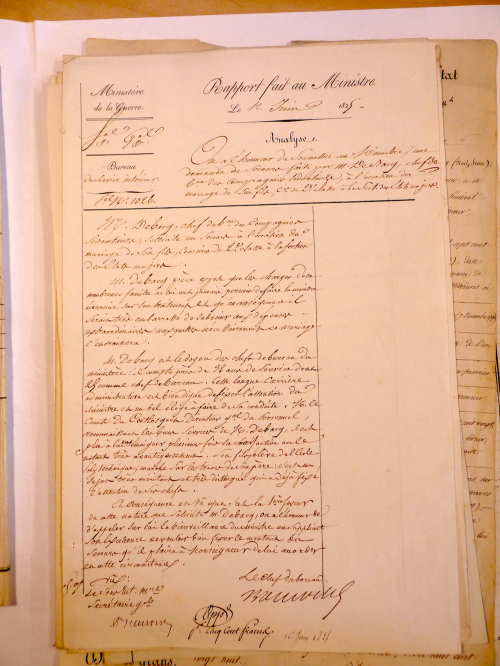 Surely, one of our most joyous of finds came from a convoluted and ever so polite attempt at nepotism in the other man's file. He had been working at the Ministry for over twenty years, through the Revolution and the First Empire, when he was contacted by a man asking if they might not be related. To back up his query, the man provided genealogical information about the family dating back to 1200! The sting came at the end, when the writer asked the Ministry employee to find a job in the Ministry of War for his nephew who really wanted to be a soldier but was extremely short and would never be accepted into the army, so a job in the Ministry of War might be as close as he could get to his dream. 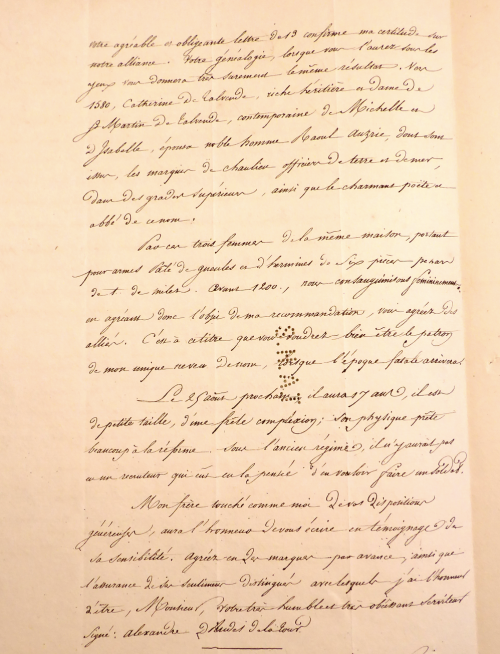 Now, perhaps, you can appreciate our swoon?

The finding aid for these files, written by the brilliant archivists at SHD, Fadoua Tarik, Claire Menessier and Bernard Hamaïde, is in alphabetical order and gives the code for each file, making requests easy. We so hope that some of you, our Dear Readers, may have an ancestor in this group, and that you may discover an equally meaty file.

Napoleon Called Them "My Soldiers" 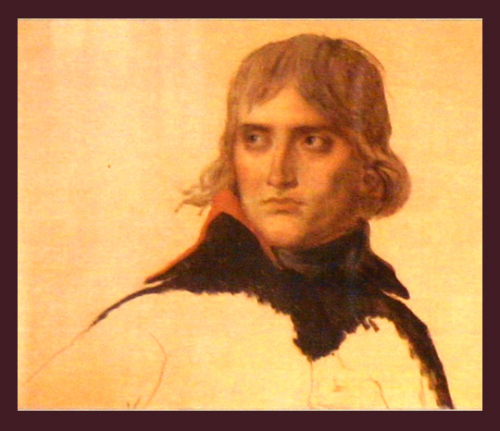 Whatever else may be said of the man, Napoleon cared deeply for his soldiers. He rode with them, fought with them, spoke to them from the heart, planted shade trees for them along the roads they had to march. Perhaps that loyalty that he felt for them was felt just as deeply on their side for him, and that may be why so many of you, Dear Readers, generations later, still write of your ancestor having been in "Napoleon's Army", of having "fought with Napoleon", and why you are so determined to prove that service. It is getting a great deal easier.

One really must praise the role that Geneanet is assuming in French genealogical research. If FamilySearch remains utterly bogged down in nothing more than French parish and civil registrations and Filae is at the forefront in increasing access to other French records such as census returns, the Bulletin des Lois and numerous collections that have already been indexed or extracted in some way, Geneanet is staking out the territory of deeper research, new scans of documents and collaborative indexing. The more interesting work can be found by clicking on "Projets" in the menu, then on "Autres projets" (Other projects).

There, you can find Matricules Napoléoniens 1802-1815, the astonishingly ambitious project of indexing the entirety of the registres matricules (muster rolls) of the Imperial Guard and the infantry of the line from 1802 to 1815. The muster rolls have been available for some time on the website Mémoire des Hommes, as we explained here, but they are not indexed on that site. One must know the regiment of the person sought and then trawl through the many, many pages of muster rolls. The only other way to find this information  has been to visit the relevant Departmental Archives and search through any surviving First Empire conscription lists.

This indexing project, which has already indexed over 600,000 names and is headed by the rather intimidating Alain Brugeat, will transform Napoleonic military research, for it will break through the barrier of Departmental Archives isolation, (the research equivalent of a virus breaching the blood-brain barrier). Once complete, it will, in effect, provide an index that will link to images of the national, military, regimental muster rolls (on Mémoire des Hommes) as well as, in some cases, to the Departmental Archives' First Empire conscription lists (images digitized and held on Geneanet).

Now, Geneanet just needs to upgrade its capacity for searching these muster rolls. At the moment, they can be searched by name only. For genealogists to be able to exploit this new resource fully, a much more sophisticated search must be possible.

Kudos all round for this.