The Pandemic Takes Its Toll on French Graves 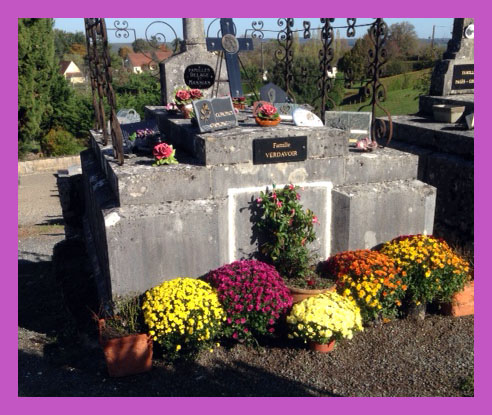 Another Toussaint has come and gone in France and, as in every year, many thousands of pots of chrysanthemums have been placed by the graves of the departed. In this year of the coronavirus pandemic, there seem to be many more new graves and tombs in the cemeteries. As of this writing, the French government reports that more than 52,000 people in the country have died of Coronavirus. As elsewhere, a large proportion of those who have died were elderly. Where possible and where desired, their bodies have been placed in family tombs or plots of cemeteries across the country.

French cemeteries are quite different from those in North America or Great Britain, as we have explained in detail here and here. The greatest difference is surely the reclamation of the plots of untended graves. This is something that many foreigners find quite shocking but that the French find to be a purely practical matter of public health and hygiene. To repeat our earlier posts, if any grave or family tomb is left untended and should fall into disrepair, a legal procedure is begun to reclaim the space, beginning with a notice of intent being placed on the grave. 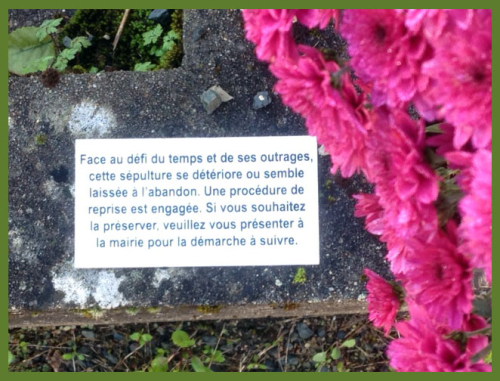 With the ravages of time, this grave has deteriorated or seems to have been abandoned. A process to reclaim it has been begun. If you wish to retain it, please go to the town hall for [instructions on] the procedure to follow.

If someone comes forward to pay for the repair and restoration of the grave, it remains; if not, it is reclaimed by the municipality and the bones are placed in an ossuary. Then, the plot is sold anew.

Now, with so very many deaths from coronavirus, the pressure on cemeteries to find more space is intense, and one sees the reclamation notices much more often than before. 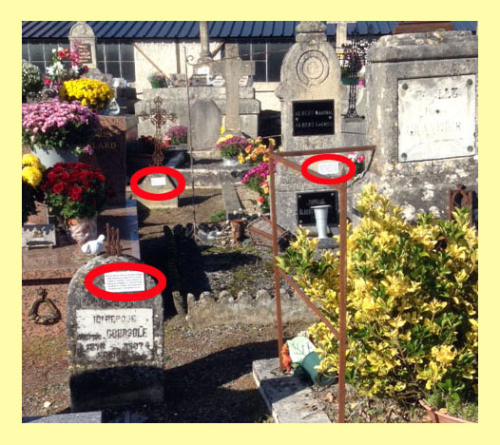 Recently, Family Tree Magazine published a very fine online article by Sunny Jane Morton, entitled "Find a Grave: 7 Strategies for Successful Searching". Her good suggestions are not of much use when applied to French cemeteries. In a country such as France, family and society are more important than the individual and so, family tombs tend to show only the surname and not the names of the many individuals entombed within. Neither Find-a-Grave nor its more complete French counterpart, Geneanet.org, is set up to help in finding out who is buried in a family tomb. Moreover, neither website has any way to note if a grave still exists or has been reclaimed. (Geneanet, pointing out that some 200,000 graves are reclaimed every year, maintains a campaign of mass photographing, "Sauvons nos tombes", but this does not address the issue squarely. What is needed is a campaign to digitize municipal burial and cemetery registers, but this would require contracts and payments instead of volunteers with cameras.)

Sadly, with the pandemic causing this sudden increase in the reclamation of plots and, thus, the disappearance of graves and tombs, for those that have not been recorded on either of these sites, it will be difficult for a researcher to know that they ever existed.

To learn more about French cemeteries, see our booklet, "Death and Cemeteries in France".

Explaining French Cemeteries, or Why You Are Unlikely to Find Your Ancestor's Grave in France 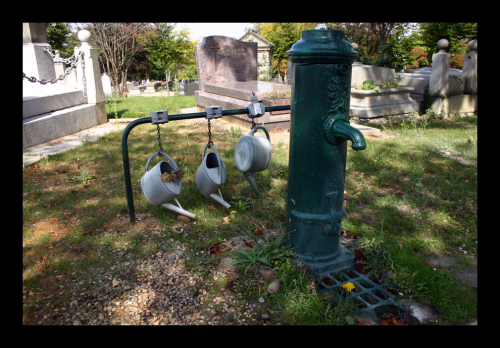 "In your article, you wrote "Pre-nineteenth century church graveyards in towns - all were destroyed as a public health measure". What does that mean? I am looking for family burials in small, rural French towns. It seems that when I look at Google Earth, the cemeteries now are all located outside of town, usually along the road leading into the small town. They seem to only have modern graves, certainly not all of the graves for the hundreds of farmers and families that died in these small towns over the hundreds of years. It is a big difference from rural cemeteries here in the U.S. which usually have headstones surrounded by grassy areas of those who did not or could not afford a marker."

Many of you have expressed similar bafflement or disbelief, so we think it necessary to explain, yet again, one of the many ways that France is not North America or Britain or Australia. The Enlightenment in France brought a wave of scientific and clear thinking that in turn lead to changes considered improvements. Among the clear thoughts was the realization that the dead were polluting the atmosphere and the water, especially the ground water, and that the cemeteries that held their corpses were a very serious public health problem.

This was exacerbated by the fact that, in crowded cities, cemeteries were the only parks and were used as such. Fairs, markets, dances, parties, all were held in cemeteries. During invasions, people ran there for refuge. The Church did not like this and built walls around the cemeteries to prevent the parties, at least. The consorting in close proximity to corpses could not have been good for the health of the living.

Among the consequent improvements was a law issued by the king in 1776, la Déclaration du Roi, concernant les inhumations, requiring inner city cemeteries to be closed and the practice of burying the dead within churches to cease. Land outside of the city walls was to be purchased for new cemeteries and the corpses in old cemeteries were to be dug up and transferred. Hundreds of French cities complied. Needless to say, not all of the reburying was done with diligence. In Paris, the contents of the cemetery of the parish of Sainte-Opportune, known as the Cemetery of Holy Innocents, became the nameless bones of the Catacombs.

The process was continued with the Napoleonic decree of 1804, which gave more precise instructions to municipalities as to where to site the new cemeteries, how deep the graves should be and how far apart. Most importantly, cemeteries were removed from the authority of the Catholic Church and became the responsibility of the municipalities. Municipal council deliberation books of the era are filled with discussions of how to empty the old cemeteries and construct the new. From these new procedures came the requirements that graves be maintained by the families of the dead; if not, they would be emptied and the bones sent to the ossuary.

All of this explains why it is rare to find an old French cemetery next to a church, filled with ancient graves, such as you might find in England. Some do exist, but very, very few. Thus, distrust all family histories that say sixteenth century graves of ancestors in France have been seen in the 1890s. Most likely, those cemeteries claimed to have been visited had already been destroyed. If France is poor in ancient cemeteries, we really do recommend that you not spend too much time seeking a grave. Instead, spend your genealogical research efforts where France is rich - on notarial records. 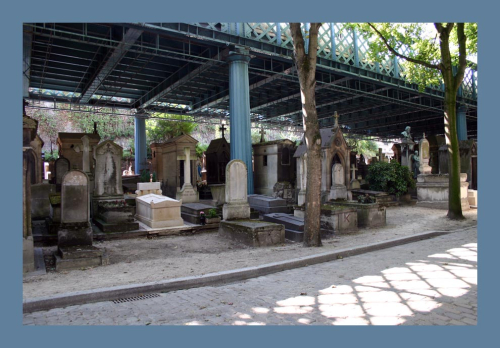 Very good news, indeed, from the Archives de Paris for anyone seeking to know where in Paris an ancestor was interred. Parisian cemeteries are overcrowded, as our photograph of Montmartre above shows, making it almost impossible (however delightful the stroll on a sunny day may be) to happen by chance upon the grave one seeks. It could be impossible, due to the French habit of digging up untended graves, tossing the bones into an ossuary, and reselling the plot to someone who will take better care of it. This is how graves are supposed to be tended:

What has long been needed by family genealogists is access to the interment registers, showing all entries, even of those long ago dug up. And now you have them online, on the website of the Archives de Paris, here. There is also a clear and complete explanation of the twenty current cemeteries of Paris. Through links at the bottom of that page, you can examine the annual burial lists for each cemetery or the daily burial registers for each cemetery.

The first set helps to locate the physical grave. Clicking on répertoires annuels d'inhumation, (the annual burial lists), takes you to a search form in which you can select a cemetery to search, and  supply a name and range of years to search within that cemetery (the concept is identical to the way that civil registrations are searched by arrondissement, record type, name and date range on the same website). The results are each a string of images within the alphabetical range to search. Click on the eye and start looking.

You will then see the pages of the register for that cemetery and be able to find out where your ancestor's grave is (or was). 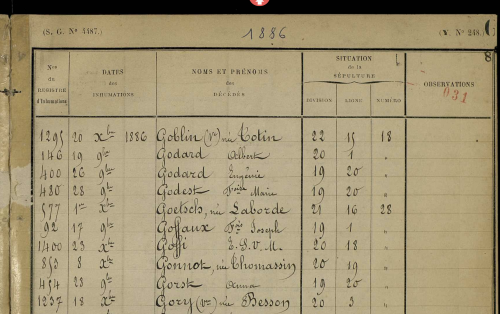 You want to note the exact date of burial, as that is how you will search in the second set, the registres journaliers d'inhumation, the daily burial registers. On this search screen, you will select the cemetery from the drop down menu (we chose Bagneux), then enter the date of burial, date de l'inhumation.

As before, you will get a string of the date range in the register to search. Click on the eye to see the pages and to read along to find the correct date. On the fifth page of this particular string, the tenth of July begins: 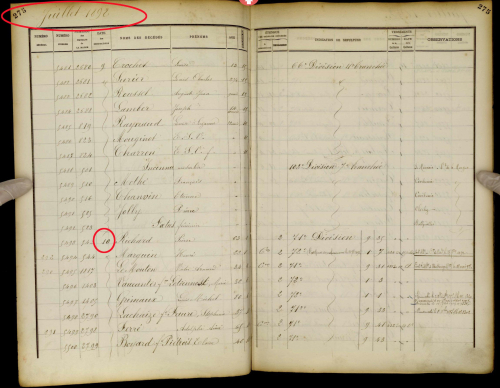 Here, you can discover the full name of the person buried, his or her age at the time of death, and the arrondissement where he or she died (this last allowing you to find the death registration, if you could not do so before). This register also tells exactly where the grave is. The registers styles and column headings vary from year to year and from one cemetery to another but they generally give the same information. If the remains were dug up and removed you will find in the "Observations" column the word "Repris" followed by the date of that sad administrative decision.

All is not as it seems. For our test search, we checked each cemetery's annual burial list for a particular name for the year 1845. The name appeared in none. We also found that, while many of the cemeteries were operational that year, the registers that early are not available online. Then, we began to check the daily burial registers and there, in Batignolles, we found our burial. Though the annual register existed and is available online, the original indexer had  missed the entry. So, try both registers, if you have a date or at least the year of death. If the register for the year is not online but the cemetery was in existence, keep checking back for new additions to the registers on the website.

Have fun with this hunt!

Posted at 12:27 in Cemeteries, Paris Genealogy, WHERE in France Was Your Ancestor From? | Permalink | Comments (7)