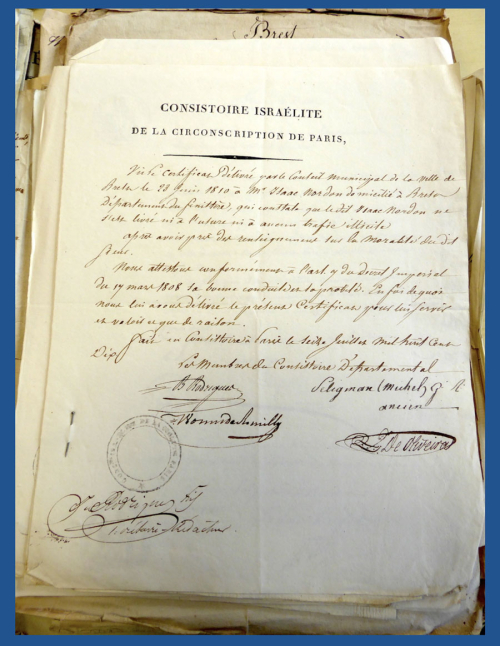 The network of consistories in France, which serve as the liaison between Jewish law and French law, was created in 1808. The Consistoire Central is at the head of the network and is based in Paris. Their archives, as with those of all the consistories in France, are private and are not open to the public.  We have described our mighty effort to access just a bit of them in a post here. Their holdings that one may be permitted to see are often limited to very basic registers, which give less information than can be found in French civil registers. (The one exception being that the death registers can give the place of burial, which civil registers do not give.)

So, we were quite delighted to come across a small collection of letters emanating from the Paris Consistory in 1808. They were letters of good character, much like the certificats de bonne vie et moeurs requested from a mayor about recently arrived Jewish residents of his city. The requests clearly followed the requirement that the mayors record the mandated selection of hereditary surnames by Jewish people, explained in this post. These character references were not required by law and so one would not expect to find them in every municipal or departmental archive but we now think that, having found them once, we will look for them on every visit.

These were found in the Departmental Archives of Finistère and were gathered by the city of Brest. They had been placed in the series 3V - "Cultes", which meant any religion that was not Catholic, and relate to the Jewish, Protestant and "New Catholic" communities. 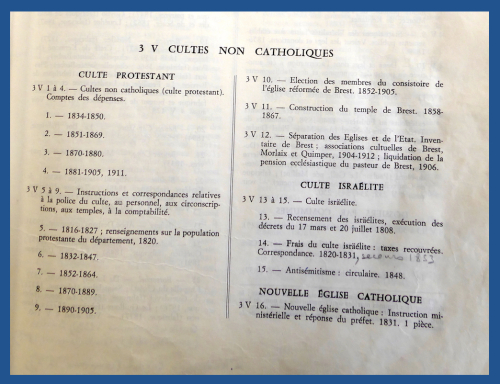 One example of these consistory certificates is above. Below is another. 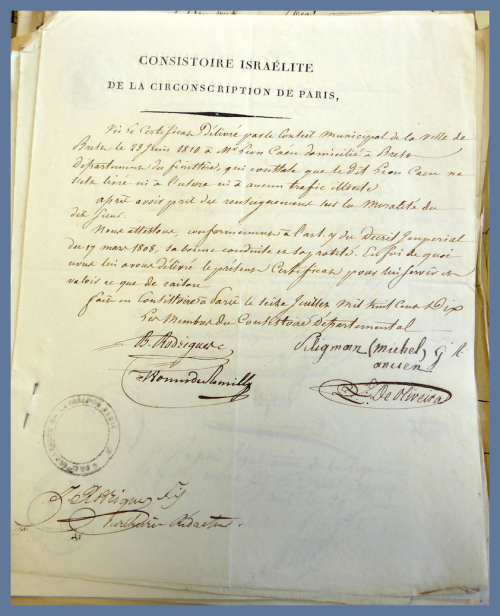 As records relating to individual Jewish people of this period are often hard to find, we consider this a bit of a treasure. In our next post, we shall tell of even more discoveries in that series.
©2022 Anne Morddel
French Genealogy

The Journey from Alsace to the Port of Le Havre 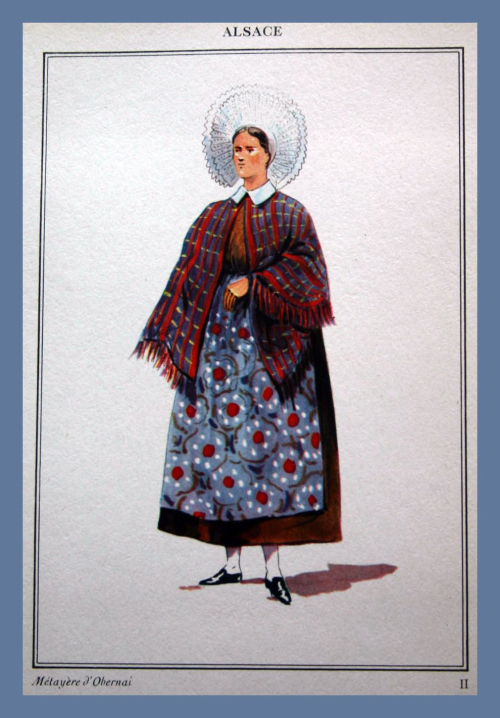 Our good friends at the blog Généalogie Alsace have asked us to share another post and we are pleased to do so as we think it may be of great interest to those of you with ancestors from Alsace. Michael Nuwer of Potsdam, New York sent to them a well researched account of how people from Alsace made the arduous overland journey to Le Havre in order to emigrate from that port. You can read the post, in English and French here; you also can read, in full, his excellent paper, "Journey to Le Havre", for as long as he leaves it on Google Drive.

By the by, this touches on the subject of our upcoming webinar with Legacy Family Tree, "French Emigrants: They Were Not All Huguenots, or Nobles, or From Alsace-Lorraine" on 20 December at 12.00 midday Eastern Time (not 2 am on the 21st!)

Letters Seized - Was One From Your Ancestor Held in a French Prison by Napoleon? 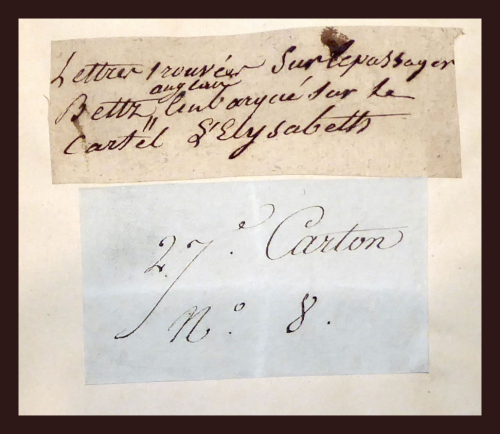 Two English seamen, James Burns and James Betts, were on the Neptune when she was captured by the French privateer, Subtile, on the 26th of November 1809. The Subtile sent her boat with five men to board their prize, the Neptune. Suddenly, the wind changed and the boat overturned, throwing all five men into the water. Three managed to get to the overturned boat and cling to her. The two others drowned. Burns and Betts rowed out the Neptune's boat and saved them. "Even though they were the enemy, we had not lost our humanity," Burns wrote later.

All were taken on board the Subtile, which then sailed to Calais. The captain of the Subtile, Tucker*, wrote a letter describing how Burns and Betts had saved three French seamen and, therefore, should not be made prisoners of war. The port authority at Calais also wrote a letter to the same effect. To no avail. They were sent to the prison depot at Arras and, some time later, Betts ended up in the punishment depot at Bitche.** Burns seems to have spent the rest of the wars at Arras but Betts was released and sailed home from Morlaix on the cartel ship, Elizabeth, in January 1813 (see the released prisoners passenger lists discussed here).

Before Betts left the prison at Bitche, in about mid-December 1812, he must have offered to take with him some letters from other prisoners. He seems to have passed though the prison at Sarrelibre (now Saarlouis in Germany) and picked up some more letters. He then appears to have passed through the prison at Verdun around Christmas and picked up one more letter there. By the time he arrived at Morlaix, he had nearly ninety letters from British prisoners of war to take back to Britain and deliver or post. The letters never arrived. The French authorities took them from Betts at Morlaix.

They have been languishing in the Archives nationales for many a long year, where we stumbled upon them last spring while pursuing our bête noire, Thomas Mansell. We were finding nothing on Mansell and decided to look at a carton identified, curiously, as "uninteresting letters from English prisoners" (archives code: F/7/4240). Oh ho! They are not uninteresting at all to our mind. They are most revelatory about a group largely unknown, being ordinary soldiers and seamen, rarely officers and none a civilian prisoner, held in the two easternmost prisons, about which the Admiralty prisoner of war records (found on FindMyPast.co.uk) have little to say.

Unlike the numerous prisoners' diaries and accounts published after the end of the Napoleonic Wars, almost all of which concern life at a single prison, Verdun, these letters were not meant for publication and so, do not contain the tedious and repetitious self-praise or the understandable resentment at the treatment endured of those books. These letters are to parents, siblings, wives, business associates and they are filled with longing, with reassurances that the prisoner is well, with Christmas wishes. Some report the sad news of the death of a fellow prisoner.

Not only are they of interest to anyone studying prisoners of war, they are of great interest to any of you, Dear Readers, researching a British ancestor held prisoner in France. This is especially so as they show relationships and acquaintances. We photographed them all and give you here a list of the names of the letter writers and the addressees. We have retained the men's spellings of their own names and of the addresses.

We do hope some of you may find your ancestor amongst them.

*Captain Tucker would seem to have been from an interesting family in Calais, founded by one John Tucker of Deal: "John Tucker, Esq., of Calais, a descendant of an ancient family in the county of Kent, but outlawed for following the Stuarts into exile. ["A literary and biographical history, or bibliographical dictionary, of the English Catholics from the breach with Rome, in 1534, to the present time" - Gillow, Joseph, 1850-1921 Volume 5 p.138 archive.org/stream/a583126605gilluoft#page/138/mode/2up/search/tucker]"

**Their story of the rescue is in the prisoner file on Burns at the Service Historique de la Défense, ministry of War archives, file number Yj 40.