In our little book, American Merchant Seamen of the Early Nineteenth Century : a Researcher's Guide, we explain that, in researching a mariner, one must follow the vessel to find the man. It is just as true when researching French mariners. However, it is not easy, for two reasons in particular:

For French vessels of the Revolutionary and First Empire period, there is the added difficulty of a lack of records. This is partly because much was lost in the chaos of the Revolution and, at the end of the First Empire, much was destroyed to prevent retaliation by the returning Bourbon king and his supporters.

In addition to the research possibilities we outline in that chapter, there are a couple of books that are especially helpful in tracking French naval vessels. 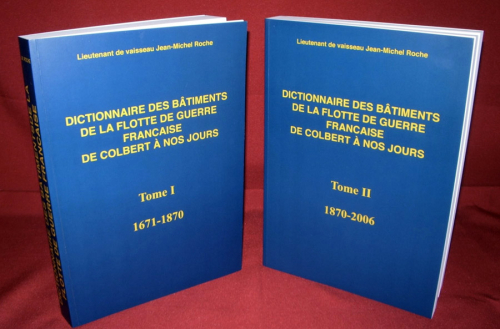 Dictionnaire des bâtiments de la flotte de guerre française de Colbert à nos jours (The dictionary of french naval fighting ships), by Jean-Michel Roche, is a whopper of an achievement. Naval enthusiasts will thrill at the many facts given in each little essay concerning a vessel: where and when she was built, how many guns she carried, in what battles she fought, what was her demise. The value for those researching a single man on board is that, where possible, each essay also gives the vessel's whereabouts in certain years. Sailors were boarding and leaving vessels all the time. If you have traced an ancestor to a vessel but then lost him, the list of places where she was (admittedly, a very short list, usually) can help you to pick up his trail again. 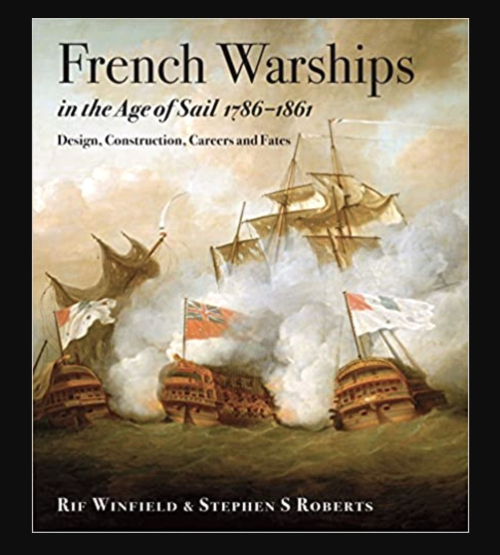 For some time, we have been researching a particular vessel, the French naval frigate of the Revolution and the Napoleonic Wars, Incorruptible. Apparently, there were at least five American seamen serving on her, and we would like to verify that. Here is the essay on her in French Warships : 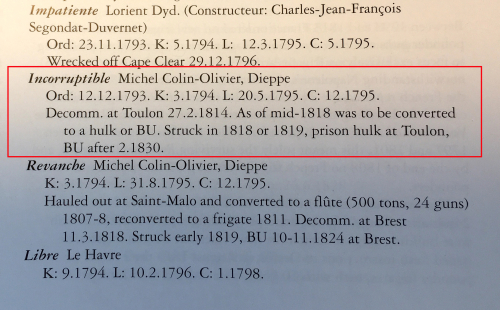 This is what Dictionnaire des bâtiments has to say about her: 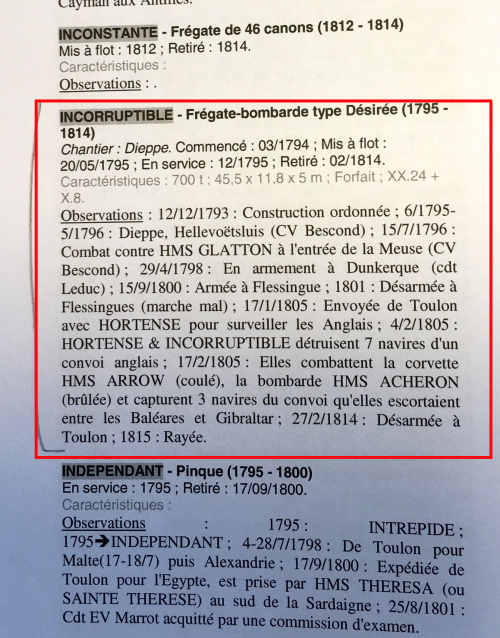 So, the French work gives more detail of her career. From this, we surmise that our American seamen boarded her at Flushing.

A third useful work, found all over the Internet is Troude's Batailles navales de la France, written in the 1860s. The charming, literary style and lack of an index make "Find" options a god-send. From this, we learned a bit more about the Incorruptible's battles against Royal Navy vessels and, crucially, the name of one of her captains: Billiet.

Knowing a captain's name is incredibly helpful when searching for a vessel online. Typing "Incorruptible" will bring a load of nonsense results. Adding words such as French navy vessel, or those words in French, is not much better. Typing, "Incorruptible" and "Billiet" however, gets very precise results.

which came up in those last results, gives many more captain's names and more of the Incorruptible's career and locations. We now have many more avenues for researching our mariners, and more places to seek a crew list that might show their names. The pandemic was a horror and the lock-downs around the world caused suffering to many; about this there can be no dispute. Yet, amongst those fortunate enough not to fall ill, some turned to creativity and productivity while confined. Les marins français, 1789 - 1830 : Étude du corps social et de ses uniformes is such a lock-down creation. It  is a treasure of a book, with lovely illustrations of uniforms and weapons, and a remarkably clear explanation of the changes in French naval uniforms during a most fraught period in French history. The author, Eric Shérer, is a Vice-Admiral in the Navy and a life-long collector of all things naval. He came to writing history through his collecting and this is his third book.

Shérer 's structure is logical, giving two chapters to each time period, the first on naval ranks and responsibilities, and the second on the uniforms of those ranks during that period. We translate the chapter titles:

Even if you cannot read French, the charts and illustrations are incredibly useful. It is a thorough study and will greatly inform your research into your French naval ancestor. 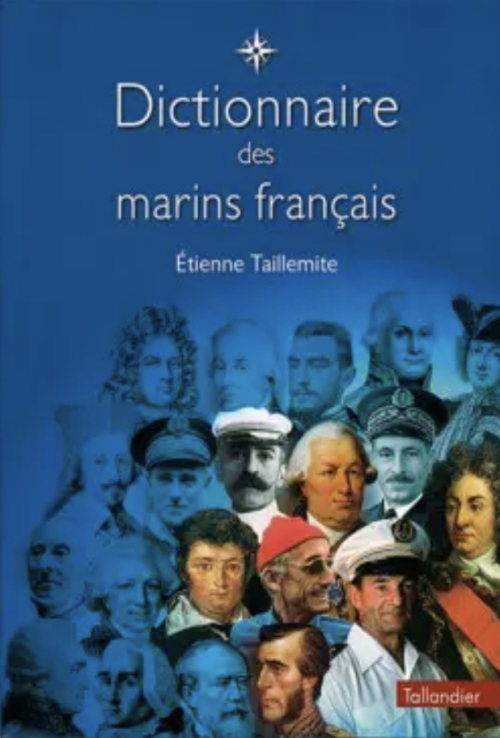 France really excels at biographical dictionaries. They are well-researched, well-sourced, well-structured (straight-forward alphabetical listing by surname) and very useful. This one, Dictionnaire des Marins français,  runs to five hundred forty pages and covers documented naval personalities of note from as early as 1341 to 1931. The biographical essays give the date and place of birth, career details, and date and place of death. If you are lucky enough to have an illustrious naval ancestor, the essay on him will delight you and possibly aid your research. For the rest of us, the real use of this book is in helping to follow the career of an ancestor who served in the French Navy, for here, you may find your ancestor's commanding officers and, through the essays about their careers and movements, work out where your ancestor was as well.

Using these two books, with our highly recommended further reading, could break down your brick wall concerning your French Navy ancestor.  In our next post, we tell how you can track the vessel on which he or she may have served. 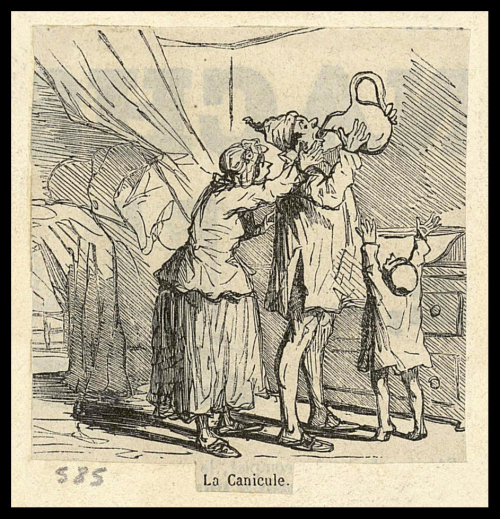 It seems that every summer, we are writing about hotter and hotter weather. This year, with not only heat waves but a long drought, has been catastrophic for France, with massive wildfires in numerous places blazing out of control. Our home is not close to the current fires, but it is close enough that we have had days of our skies filled with smoke. Once again, we are wearing masks, this time to be able to breathe without choking. It is heart breaking and frightening to watch new reports of forests burning and then to go outdoors and see trees and all plant life withering and dying. 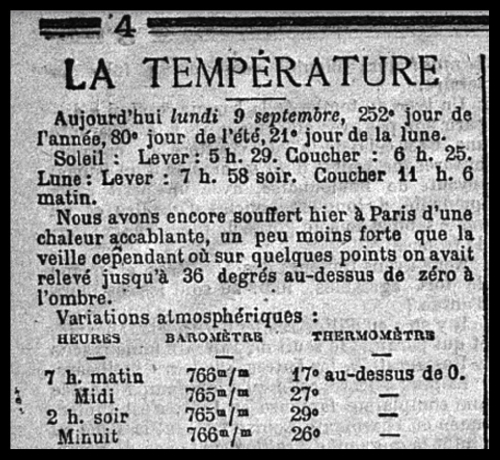 And they can be deadly. Not only do people die from the heat, but from disease, as the water warms and more bacteria lives in it, especially that which causes dysentery. The historian, Emmanuel Le Roy Ladurie has written much on the history of the climate of France and how it has affected people. It was disease from the limited, warm, filthy water that killed half a million in France in the heat wave of 1636. In 1705, another series of heat waves led to the deaths of 700,000. The drought and heat waves of 1718 and 1719 were so severe that "clouds of Saharan grasshoppers" swarmed central France. Modern water purification has ameliorated the catastrophes somewhat; still, in 1911, 40,000 people died from heat and/or disease and 15,000 in the heat wave of 2003.

Much of his research for the book On the History of the Climate of France from the 14th Century, involved looking not only at recorded temperatures but at parish registers for recorded deaths to determine the effect of climate on mortality rates. His charts are useful for the genealogist who may come across a cluster of deaths in a family, especially the babies, during a short period. Grim reading.

Does a Baptism Date Imply a Date of Birth? 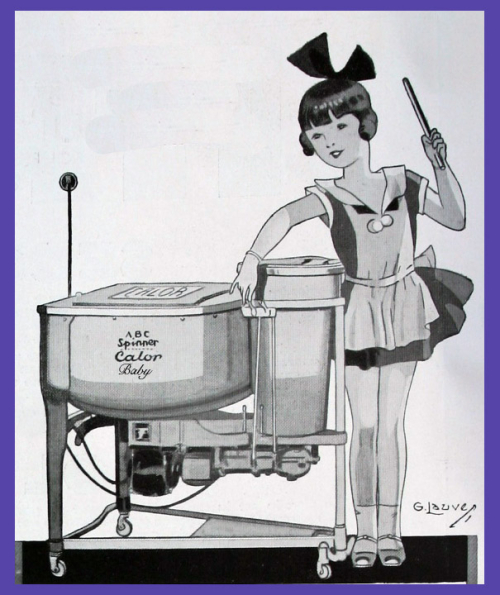 We recently received an e-mail from Madame L asking:

I searched through the country of France section on the FamilySearch Wiki and found under the Church Records topic that infants whose families were of the Catholic faith were typically baptized two days after they were born.

We feel that this reveals the curse of genealogy software that is deeply ethnocentric. Ideally, one would like to be able to simply put the baptism date without have to guess as to the birth date. Usually, with such software, it is also not easy to enter an explanatory note about religious customs or ceremonies that can take place quite a bit later than a birth. For example:

All of these examples could show a baptism date quite different from a birth date.
It is worthwhile to remember that, from 1792, with the advent of civil registration, Church registers of baptism ceased to have legal validity. Additionally, while civil registration of a birth became obligatory, baptism ceased to be so. Thus, after 1792,  the one replaced the other as legal records of identity. People could and did, of course, continue with religious ceremonies, but as France no longer had a state religion, those religious records were considered purely private and of no legal value.  On the whole, it is not necessary for the purpose of identity to search for baptism records where  civil birth records can be found. We explain more about the difference in an earlier blog post here.
Coming back to the original question of how to note a date of birth based on a baptism, we repeat one of the many golden rules of genealogy: Never Assume. If you do not have a birth date, you must not invent or guess one. If you have a baptism date, note it as what it is: a date of baptism only. Do not try to make a baptism equal a birth.
We have spoken.
©2022 Anne Morddel
French Genealogy