Can You Find the Record of an Italian Ancestor in Napoleon's Army of Italy? 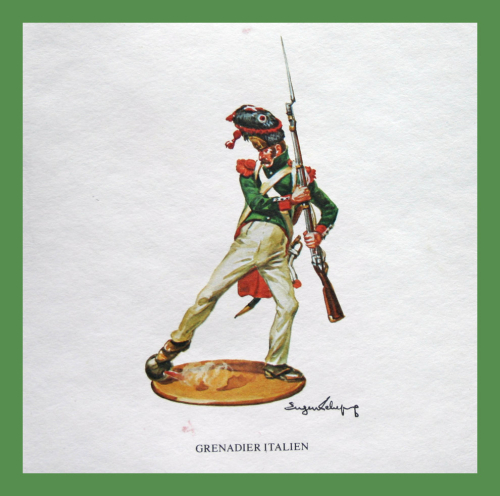 Briefly, in answer to the question we pose in the title of this post, yes, but it is not easy and not always possible. As with any French military research, the amount of archival material is so great that it is hard to find one's way through it. If you are new to this, the Archives nationales has a nice explanation of how to start. In English, you have our own explanation on "Researching a Conscript".

We begin this search, as ever, with history. Originally, the French Army of Italy was not an army of Italians, but an army to protect France's borders with Italy. It became something quite different and impressive when Napoleon, in the 1790s, made significant changes. As this excellent article by Professor Francesco Frasca explains, when Napoleon formed "sister republics" to France from the old Italian principalities, the Lombard Legion also was created. The other republics had legions and regiments as well. It is crucial, in this historical research phase, to look for the regiments in which Italians served because the archives are arranged such that one must know a soldier's regiment in order to be able to search for him in muster lists and registers.

On Wikipedia, a detailed listing of the composition of the Army of Italy from 1792 to 1793 can be found. Those years are too early to include Italians; one would have to determine which regiments remained in the Army of Italy (later the Army of the Realm of Italy) until 1796 and later, then which ones might include the ancestor in question. This article, by Ricky Gomez and Zbynio Olszewski, is on Napoleon's Foreign Infantry, and contains a very useful section on the Italian regiments of infantry. This article, by Paul L. Dawson, "Napoleon's Foreign Troops in 1815", is our last suggestion. While reading it may revive thoughts of serious discipline for the inventor of "auto-correct" (a grave misnomer), it is nevertheless useful for its explanation of how foreigners were scattered throughout the French Army and not strictly grouped together by nationality. By the time you finish with these, you will understand how important it is to know the regiment before beginning the hunt.

The online hunt is limited, for the time being, to infantry regiments, imperial guards, royal guards and consular guards, all held in Series 20 and 21 YC in the Service Historique de la Défense, the only series of regimental registers of the First Empire to be digitized so far on their website Mémoire des Hommes. (For a deeper understanding of them, the military archives of SHD are brilliantly explained on Geneawiki) Not to worry, there is plenty of work there. Taking a look at the Gomez article, for example, it mentions that the 113th Regiment of Infantry of the Line was formed of troops from Tuscany. Going to the site Mémoire des Hommes, selecting Recrutement et Parcours Individuels from the menu, then selecting Rechercher dans les instruments de recherche and, finally, using the filters (in pink, on the right in the image below), we come to six filmed registers of  the 113th Regiment of Infantry of the Line.

We selected the first, showing the formation of the regiment on the 1st of January 1810. There are over three thousand pages, full of Italians. The pages are not fully indexed. (Read more about the ongoing indexing project here and here.) However, the genealogical findings are a reward, as this entry shows: 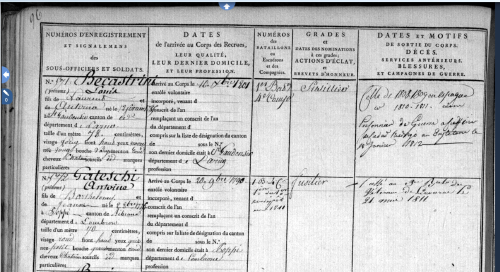 The 113th regiment is identified at the top of the screen as previously having been known as the "Tuscan Regiment". A few others with such Italian names or composition are:

Should you have more energy that we do, you can read through all of the regimental histories provided by the links here. (Many German, Irish, Dutch, Swiss and Polish regiments are identified on that page, but not the Italian, sad to say.)

Not digitized are the correspondence records of the Army of Italy in Service Historique de la Défense, in Series GR C4 . You can read through the finding aid here, on pages 96 to 107. If you are certain of a folder, you can then request a researcher to examine it for you in the archives.

If your Italian ancestor lived long enough, he could turn up in the list of recipients of the Medal of Saint Helena, as we explain here.

Many thanks to Monsieur N for inspiring this post.

In a comment recently received, a reader complained about the many words in upper case letters in French records and, consequently, in search results on Filae and Geneanet.  We thought our explanation might be of interest to you all (comments do not get the attention they deserve, it seems).

Generally, in all French documents, surnames are in upper case letters. This helps to make it very clear what is a surname and what is not, because there are many surnames that could be first names, e.g. MARIE, HENRY, GEORGES, MARTIN, etc. So, if you see a name written as "MARTIN", you know it is a surname; if you see it written as "Martin", you know it is one of the first names.

The title to this post may be longer than the content, but life is full of grandiose façades billowing in front of titchy realities. We do hope this small fact will not be as disappointing as they can be.

Do You Dare to Try to Research Your Alsace Ancestors Online - in French? 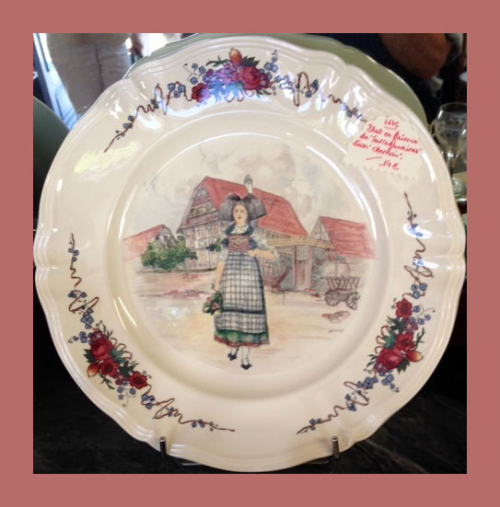 We have had a missive from Christine and Laure, who write the wonderful blog Généalogie Alsace. They have put together a brief series of instructional posts for those who live far from that pretty region of France and must research their Alsatian ancestors online. The posts are in French but are very clear and easy to understand (or to translate)

The first, "For Those of You Who Are Far From Alsace", explains the basics of Alsatian emigration in the nineteenth century and gives some understanding of the region's geography, especially the two departments, Bas-Rhin and Haut-Rhin.

The second, "How to Research an Ancestor from Bas-Rhin Using the Internet", explains just that. It lists and explains the most useful archives and, where websites exists, gives links.

The third does the same for the department of Haut-Rhin. This may be your best hope if your ancestors come from Haut-Rhin, as the notoriously unhelpful archivists of that department's archives will never provide any service by post or e-mail.

The last may be a bit much, for it explains how to transcribe and then translate Alsatian German records....into French. Why not try it even if it does seem preposterously difficult?

You have, in the posts linked above, a complete beginner's course in Alsace genealogical research.

Many thanks to Christine and Laure.