The Diocesan Archives of La Rochelle 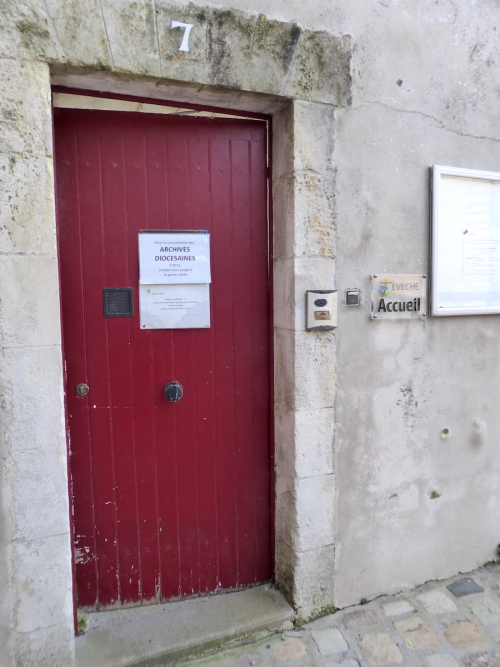 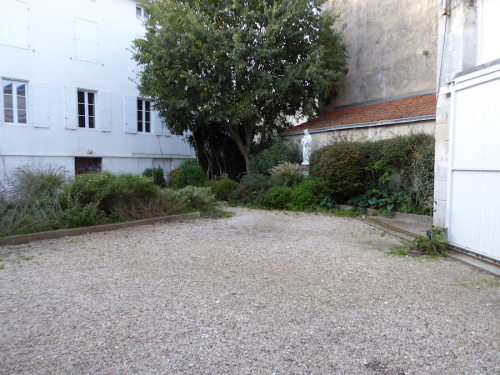 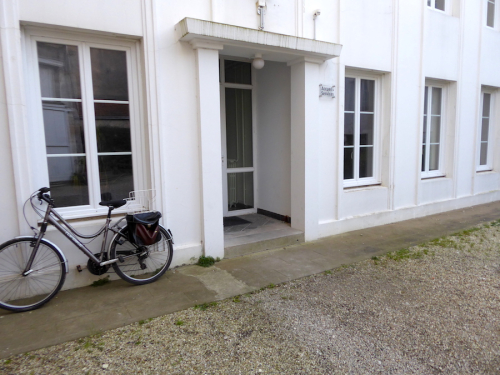 Just a little off the charming quay, behind the concert hall of La Rochelle, tucked away in a cobblestoned alley are the Diocesan Archives of La Rochelle. One pushes open the red door to enter a courtyard that may be lovelier in the spring and summer but that, on a rainy November day, is nearly colourless. To the left is a door with a sign on it that contains a telephone number and the instructions to ring it for access to the archives. This was worrying, for we had not booked, trusting the website that had said the archives were open en principe at this time. What if the principle had not held and our afternoon was to be wasted? We rang the number and asked to enter; almost instantly we heard the thundering of footsteps on the stairway within. The door was opened by a smiling, if breathless, librarian, who turned and ran up the stairs, without looking back to see if we, with our arthritic pins, were anywhere in the distance behind her. No matter; we got there in the end, and entered one of the tinier of the archives and libraries we have seen on our travels. 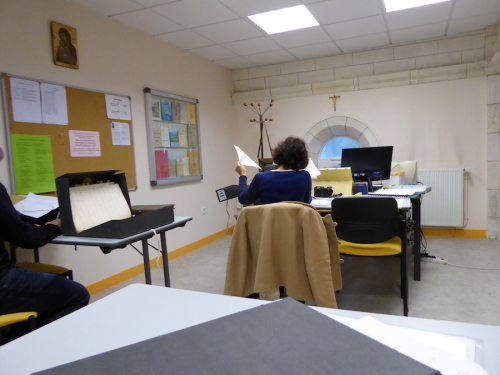 Tiny, it may be, but well organised; the finding aid (inventaire) to the records of the Ancien régime are online, so one can prepare well in advance. All the preparation in the world, however, can not anticipate the at times quite thrilling discoveries one may make. Among the papers proving ownership of property donated to the Church, was an early eighteenth century marriage contract. 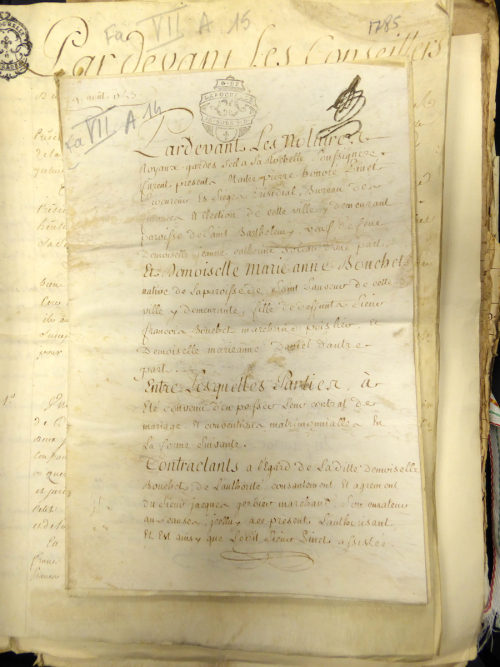 It is worth noting, then, that, if your ancestors gave large properties to the Church, properties that other relatives might have wished to take back or that, for some other reason, the Church would have had to be able to document thoroughly, the archives of the relevant diocese could hold similar treasures to the above about your ancestors.

There were also a number of small registers of "Secret Baptisms" and clandestine nuptial blessings made by Catholic priests during the Revolutionary period and the Terror, when the Church was illegal. These are not indexed or online. The only order is that they are grouped by the name of the priest who performed the baptisms or blessings. They are fragile and incomplete but could contain the name of an ancestor who was willing to risk the guillotine to be married a Catholic.

It seems that, in days long gone, the diocesan archivist would exchange with others about and contribute to the compilation of an informal family genealogy, using the diocesan records, at no charge, and post it to the person who requested it. That would never happen today; please do not ask. Again, if one of your earlier family historians' epistles aroused an archivist to make such an effort concerning your ancestors, the work could still be stored in the archives. Here, we came across such a genealogy on a family from Quebec.

Diocesan archives should never be your first port of call in researching your family; but, after the Departmental and Municipal Archives, you may decide that the Diocesan Archives may well yield more about your ancestors. In that case, by all means, go. Even if you learn nothing about your family, you can sit quietly at your desk and not be able to avoid learning  quite a lot about the local community from the other users' gossip, which can be of a shockingly personal nature.

Return to the Departmental Archives of Charente-Maritime 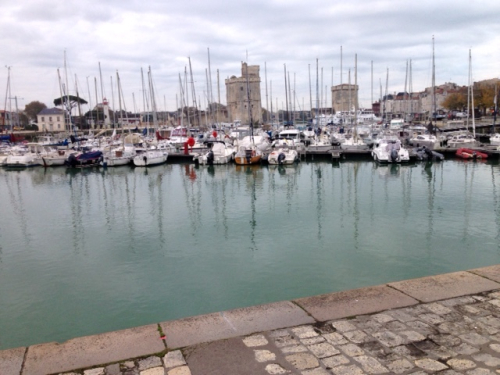 It's junket time again, Dear Readers, and we have returned to La Rochelle and the ever-improving Departmental Archives of Charente-Maritime. The expert staff continue to be cheerful and helpful and the research guides that are available at no charge on a stand next to the desk (and that can be downloaded here) really are superb. For all of the general knowledge that  can be acquired from basic genealogy guides and manuals, one still must discover and become familiar with the quirks and oddities of each archival collection before the research can yield successful results. These guides, specific to the collections in this facility, really are most helpful.

A happy new service since our last visit is the availability of free wifi within the Salle de Lecture, or Readers' Room. This means that, if need be, one can access Filae.com or Geneanet while looking at original documents, and that one can access DropBox and similar services. Wifi is not available in most departmental archives yet but we do hope that other will follow suit. 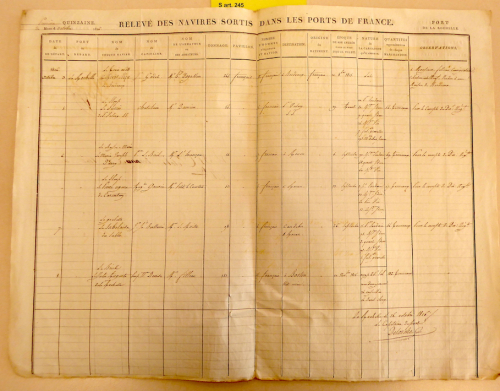 Our document discovery for this visit is the lists of vessels entering and leaving the port for the nineteenth century. In the example above, for departures from La Rochelle, quite a lot of information about a vessel is given:

La Rochelle was not a major port of emigration in the nineteenth century and there are no collections of passenger lists. These vessels were cargo ships but they may have taken a few passengers. The last on this list, for example, the brig Jules Auguste, Captain Denise, was going to Boston and left on the 8th of October 1816 with a cargo of salt, wine and nails. Should your ancestor have arrived in Boston  from La Rochelle a few weeks later on a Jules Auguste, this can help to confirm the voyage and give more information about it.

La Rochelle must be acclaimed as one of the best of cities for researchers. In addition to the fine departmental archives are the interesting municipal archives, with the naval archives not far away in Rochefort. A fourth repository, the diocesan archives of La Rochelle, is to be the subject of our next post.

Improve Your Knowledge of French History 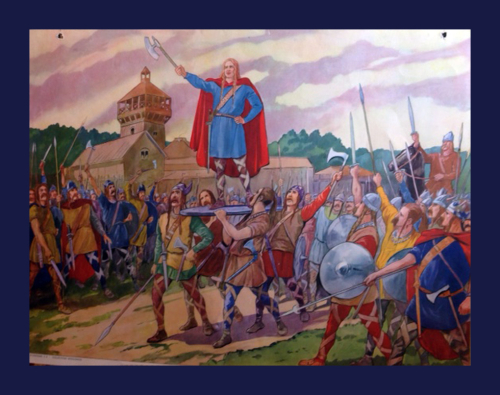 We have come upon the admirable effort of a young man keen on French history, The French History Podcast. Gary Girod, by his writing, may be the most passionate of francophiles that we have read. Having become entranced by France during some sort of school trip, he later lived in Béziers for a while (where he could have encountered Jean Boischampion, of the lovely stained glass family crests). After a brief career as chequered as our own, he would now seem to be settled in a doctorate programme during which, apparently as a hobby, he has also decided to produce podcasts covering the entirety of French history. Ambitious perhaps, but why not enjoy the dear boy's work as long as it lasts?

And we do hazard that it will bring you some enjoyment, Dear Readers, for his podcasts are both entertaining and informative. He might be a bit more enamoured of the Vercingétorix and Astérix era than we could ever hope to be, but he then expands his range to include interviews with historians and leaps to such modern subjects as women's rights in France. In all, quite fun and yet another way for you to understand the country and culture from which your French ancestors came.

A couple of years ago, the brilliant archivists in the Archives nationales produced a superb advice note on how to research émigré ancestors in France's National Archives, entitled Rechercher un émigré de la Révolution (1789-1825).1 (Note that the word émigré simply means emigrant. English speakers who use that French word mean only those people fleeing France during the Revolution, from roughly 1789 to 1799. When French people use the word alone, it can mean anyone who emigrated at any time for any reason from anywhere. To refer to the same group as meant by the English speakers in French, one must specify that one is referring to emigrants of the Revolution by saying so: émigrés de la Révolution.) As this fine advice note is in French, we summarize it here for our Dear Readers who may need a bit of a hoist over the language hurdle.

The authors begin by giving a bit of historical context. From 1789 to 1800, approximately one hundred fifty thousand French people left their country secretly, or at least without authorisation. (We add this point ourselves since some of them left with so much baggage and made so much noise about it that their departures were common knowledge.) Some had the time to sell up and leave with money, most did not and abandoned all.

The Revolutionary emigrations were in roughly two waves. Those who left before 1792 tended to be aristocrats and counter-revolutionaries. Those who left afterward, forming the second wave, were fleeing the increasing violence and then the Terror. As things calmed down, the government tried to lure them back and some did return, making for something of a first wave back. The second wave of return was, of course, after the defeat of Napoleon and at the establishment of the Restoration, in 1814.

The research advice has four sections:

The Key Points for Genealogical Research

Diligent, nay, stupendously heroic archivist Marthe Robinet worked throughout the 1940s extracting details from nearly twenty different archive series about émigrés and creating an informational card about each one. One card, mind you, that a user can pull to find a list of every archival document in the National Archives about that particular person. At the moment, these are not online, but it looks as if they may be soon. To see them, one must go to the archives and view them on microfiche. Part, but not all of the source material is indexed online, and a few of the actual dossiers may be viewed online.

Administrative and judicial processes and documentation in the archives

There are a vast number of police surveillance files concerning émigrés, and files of cases brought against them, of the confiscation and sale of their property, of judgments against them, of laws passed about them, of their trials, lists of their names, files on their counter-revolutionary activities. Then, there are files on their return to France, the restoration of their property, of their amnesties and removal from lists of criminals and traitors. None of these are online.

This group encompasses the many seized papers and documentation of the émigrés, their own private archives, notarial records relating to them (some of which have been indexed and abstracted). Only a very few of these are online.

Departmental Archives (see the list in the panel to the left), municipal or communal archives, the Diplomatic Archives, the military archives and the Paris police archives, all can have more on individual émigrés. The archives of the countries to which they went can as well. The paper ends with a wonderful bibliography of works about émigrés.

This is the briefest of summaries. Do click on the link to read the advice paper in its entirety. Though little is online, an enormous amount will come up in a search on a name on the website for the finding aids of the Archives nationales. Recall that we explain here how to go about ordering the material.

Posted at 19:11 in Methodolgy, Nobles, Aristocrats and Emigrés | Permalink | Comments (0)