Well, Dear Readers, following on from our last post, Les Bleus, as the French national football team is known, have won the World Cup. The final match was rather thrilling and, as one would expect, the country was delirious. Parades on the Champs Elysées, Legion of Honour medals for the team and, in front of every home, the French flag proudly flying in a fashion that one normally sees only in America. Great fun. We have always appreciated the way that a nation's participation in the World Cup can, if for a few days only, unite a country in a non-combative form of pride and competition. During our childhood in California, we saw how the World Series or the Super Bowl could unite citizens of a town in shared enthusiasm, but the entire nation? For a sport? No, we never saw that.

Pulling a nation together is hard, to be sure. Currently, there is much discussion of an American broadcast personality and his comments on the racial identity of many members of the French team, which brought him a letter from the French ambassador to the United States. We watched the video of him reading it aloud and disputing it and we groaned at the layers of misunderstanding on both sides. To our mind, the misunderstanding hinges on how the two societies think about equality and how they try to ensure it for their citizens. In America, individuals celebrate their racial, ethnic and religious identities above their Americanness. In France, equality is ensured through every citizen's Frenchness. Differences and individuality are celebrated (and the team's racial and religious diversity was much vaunted in the French press, by the way) but one is always French first. Thus, in France, to say, as the personality proposed, that someone could be both "French and African", would be to dilute his or her equality.

Like America, France has a past of glory mixed with shame, including a horrific civil war. The War in the Vendée was fought in 1793 and, as with all civil wars, it was vicious and at times barbaric. Thousands were killed and generations remained bitter. Less known was the Chouannerie, a guerrilla war that lasted from 1792 to 1800, in the west of France. (In both, les bleus referred to the Republican Army and les blancs to the Royalists. Thus, calling the French football team les bleus carries a greater connotation and more historical context than merely the colour of their uniform; they represent the Republic.) The department of the Côtes-d'Armor was in the thick of it and, with defeat, suffered greatly and for long afterward. For those of you with ancestors from Côtes-d'Armor, know that issues of inclusion and euqlity have been thorny subjects for a couple of hundred years or more.

Yet, researching their genealogical lineage is easier, thanks to the excellent website of the Cercle Généalogique des Côtes d'Armor. It has taken the French genealogy associations a while to let go of Minitel and its software, to find new software that would accommodate all of their data, and to create new websites to present it on the Internet. They are achieving their goals and the resulting websites are quite helpful. One of the best, to our mind, is that for the Côtes-d'Armor, particularly as it links to the website of the Departmental Archives and serves as a quick index to images there. It goes well beyond just the search for birth, marriage and death records. It also has:

A more generous organisation than many of its kind, this has many pages that may be used by anyone, member or not, while others do require membership. If your answers be there, join, for Heaven's sake!  Plenty to work on, here and, as the next World Cup is not until 2022, plenty of time to research.

Please forgive this repost as we dash to watch the World Cup final, in which France plays Croatia. Allez les bleus!

We were never much of a sports fan, though we were loyal to the Giants baseball team, which was most character building. Other than that, we were indifferent. We had barely heard of soccer and thought it was something only Latin Americans played. Then we left the homeland and discovered how very thick were the blinders we had been wearing.

We spent some years in Brazil, the land of "the beautiful game". There, where every bank and shop shuts and the streets are emptied when Brazil's team has a match during the World Cup, it was impossible not to learn about it. We were told that for Brazilians  it is not enough to win; the team must play beautifully and win. Intriguing. So we began to watch World Cup matches on television. Like every American who watches for the first time, we could not believe how hard the players ran and struggled to score just one point. It seemed crazy, like paying hundreds of dollars for a small square of chocolate. What finally captured us were first, the overhead camera shots in which one could see the geometry of a play and second, the fancy-dancy footwork. It is indeed, at times, a beautiful game.

Of course, it is not the perfect game. We do not like football hooligans. We do not like the Saxon squads' penchant to "go for injury" whenever outplayed. Most definitely, we do not like what one journalist referred to as Italy's "dark arts of football". We do like the beauty of the skill and teamwork, and the way the team will play their hearts out for one precious goal.

We are in another World Cup year, now living in France where, though their team made fools of themselves this year, the nation is passionate about the event. The World Cup is different from anything we ever saw in America. It changes people, brings them together in a temporary camaraderie.  When the cup is won, everyone in the winning country pours into the streets and hugs one another with joy, as if a war had ended. Nationalism can be a dangerous thing, but in the same way that the presidential election allows a controlled revolution every four years in America, so the World Cup allows a controlled resurgence of nationalism. Never, for the Super Bowl or the World Series, is all of America united behind one team, but during the World Cup, entire nations are together in their support of their team, and all of France is for "Les Bleus".

If you think one of your more recent ancestors may have played for Les Bleus in the World Cup, you can check your hunch against the team lists for every World Cup since it began in 1930 on the website of the Fédération Internationale de Football Association, FIFA.

Select any of the years when the World Cup was held: 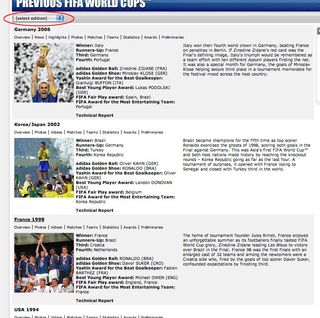 When the next screen comes up, click on the word "teams" in the horizontal bar: 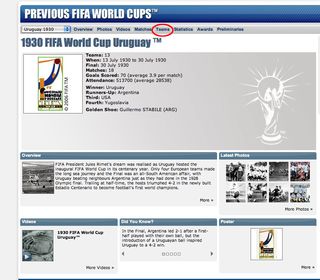 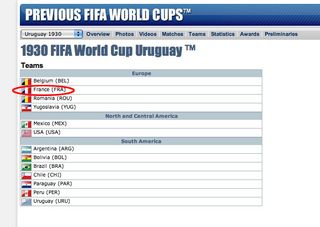 to get the complete list of names and each player's date of birth: 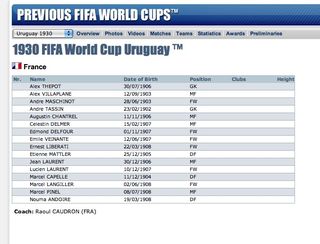 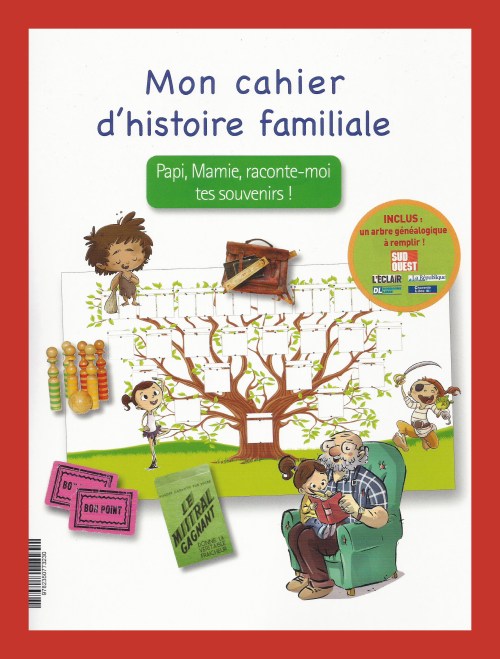 In France, when families go on holiday during the summer, it is not all abandonment. Children are expected to dedicate an hour or so every day to school work. From June, the supermarkets and bookshops (yes, bookshops still exist in France) are full of different types of workbooks for all levels of study. Workbooks on maths, workbooks on French spelling and grammar, workbooks on history, workbooks on science at levels ranging from the earliest years of schooling to preparation for the baccalaureate. At the beach or in the mountains or in a brasserie, in summertime, one often sees a child studiously working on such a book's lessons, with a parent nearby making certain that attention does not wander.

Increasingly, there are a few on the subject of genealogy. Our example today is "Papi, Mami, raconte-moi tes souvenirs" ("Grandpa, Grandma, tell me your memories") but there are others, all similar. The structure follows the pattern of children's genealogy school assignments, mixed with puzzles and games and spaces for snapshots. We know that all of you, Dear Readers, are diligent students of French and have committed to memory our own French Genealogy Glossary in its entirety. If, however, you are just beginning your French genealogy journey, why not learn about it as the French do?

We will be giving a course on French parish and civil registrations with the Virtual Institute of Genealogical Research in October. Why not spend your summer learning a bit of French with such a workbook before you take the course?