What Were Your Ancestors Worth? Converting Old Money Into New

We cannot understand why, but countless times people have written us to ask that we help them to prove that their French ancestors were wealthy. No one seems to want their family's journey to embody the rags to riches story; all seem to prefer that their family show how the mighty have fallen.

We have received messages from our correspondents in which they insist that their ancestors chose to abandon wealth, land and status to travel steerage and work in a new land as a butcher or a seamstress. We have tried to explain that small sums, such as thirty livres, at the time of the French Revolution were no fortune and we have been roundly told off for our efforts to adhere to the truth.

Henceforward, we shall refer all questions concerning the value of old money in modern terms to the excellent new website Convertisseur de Monnaie d'Ancien Régime, the creation of one Dr. Thomas Fressin at the Université Côte d'Azur. An admirable achievement for Dr. Fressin, it is a great toy for the family historian, straightforward and easy to use. Now, you must haul out all of those old French wills and marriage contracts and start converting.

End of many a dispute, this, and not a moment too soon. 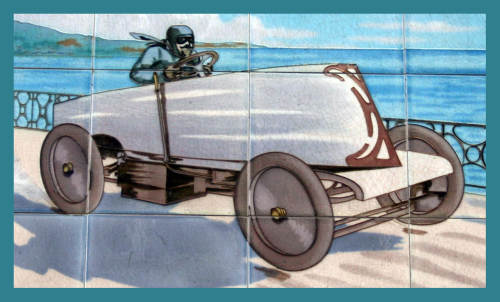 The race among Departmental Archives to digitise and put online their parish and civil registrations finished long ago. The winners, Mayenne and Seine-Maritime, have had their laurels so long that the crowns have grown dusty and been relegated to a remote cabinet with indifference. Since then,  most Departmental Archives have moved on and begun filming and adding to their online collections such delights as probate and notarial indices. Spectators' spyglasses have all been pointed forward to see what new delights may appear. Pregnancy declarations? Parisian notarial records? When, lo and behold, a huffing and puffing is heard on the track and we all, in astonishment, swivel our heads and adjust our spyglasses to see. It is long-forgotten little Doubs! Performing something of a "Little Engine That Could" miracle, Doubs has finally put online its parish and civil registrations.

Well, perhaps not all but certainly a few of its parish and civil registrations may now be seen on the Internet. They still have not made their website any more user-friendly or logical. Nevertheless, a beginning has been made and praise as well as encouragement are due. Initially, the website offers three possible avenues of searching: simple, guided and expert. "Simple" searches the finding aids. "Guided", recherche guidée, is hardly that, unless eight images may be considered a guide, but that is where to begin.

If you click on the rather obscure picture of a hand grasping at a possible register book, next to Recherche dans l'état civil numérisé, you will be taken to a truly minimalist search page. There, you may enter the name of a commune (no drop-down menu of choices and no spelling aid, you had just better know or go away, or check this list) and you have the option to enter a range of years. The result will be all of the items filmed to date, looking something like this: 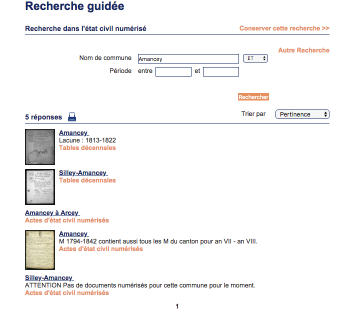 Click on the image to be taken to the digitised microfilm.

Alternatively, to see all the communes, or towns, listed and what has been filmed for each, click on the words in red, Etat des fonds, next to the picture of the finding aid on the "guided" search page, below the title Recherche par plan de classement.

This takes you to the classification of the series of Departmental Archives. Click the letter E - Communes. Seignuries. Familles. Etat civil. Notaires. Then click Etat civil. Then click Registres paroissiaux et d'état civil. Then, half-way down the page, under the bold Instruments de Recherche, click on the second, red Voir l'inventaire next to Répertoire des documents numérisés, en cours. Don't give up. Now, you are presented with an alphabet, being a list of communes or towns beginning with that letter. This is the only sure way to know if a negative result means that a town's registers have not yet been filmed or no longer exist.

As for the "expert" search, we must not qualify to benefit from it. Every time we have tried its large box, we get the same results as for the small box of the "simple" research. If the differentiation between "simple" and "expert" is thought to be a matter of the size of the query, much of the reasoning behind the Doubs delay is revealed.

Have at the Recherche guidée and good luck! 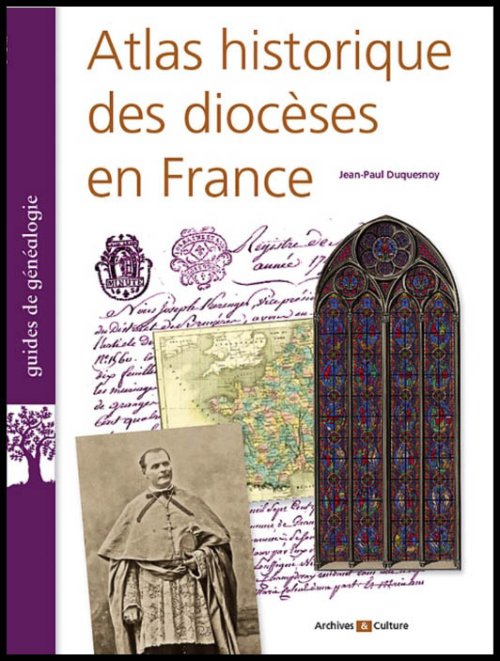 The one-woman powerhouse that is the publishing company Archives & Culture  has brought out another genealogy guide, or guide de généalogie. To anyone who has researched his or her French roots to earlier than the French Revolution, the thought of a book that explains at last the intricacies and geography of French Catholic dioceses would bring joy and immense relief. This book, by Jean-Paul Duquesnoy, the Atlas historique des diocèses en France, is, unfortunately, something of a disappointment.

Prior to 1792, however, the parish registrations of life events were the legal documentation and are of great importance in genealogical research. The difficulty is that identifying the correct geographical location of parishes mentioned by emigrants far from France is often close to impossible. There is much repetition of parish names throughout France and one really needs to know the correct diocese to continue research. At times, the diocese may be mentioned but identifying its location and boundaries, or even its correct name may also be problematic. (We tell a tale of the struggle here.) Over the centuries since the Christianisation of France, the dioceses have changed names, changed boundaries, been reorganised and in some cases merged. Thus, a book that could resolve the issues concerning the geography of dioceses and parishes prior to 1792 would be extremely helpful.

The Atlas is touted as just the ticket but it is not. It describes the modern, post-Revolutionary dioceses and bishoprics. It gives a list of bishoprics as they were at the time of the Revolution's beginning, in 1789. It gives the briefest of written histories of the ecclesiastical provinces and their dioceses as they were in 1789, with a tiny map of the dioceses. By page six of a ninety-six page book, this brief history is finished and the rest of the book is dedicated to an alphabetical list of the dioceses, with a brief historical account of each, mostly but not entirely from 1802 onwards. In truth, for the genealogist, this is not much help. (Additionally, it contains some serious flaws, as detailed by a comment on Amazon.fr by "Loïc Pilven le Sévellec", such as omitting the diocese of Strasbourg, among others.)

The longed for series of maps showing the historical developments and changes of the dioceses is not to be found in this little book. That is because it would appear not to exist, at least that was the case in 1965, when the excellent article on the subject, "La carte des diocèses de France avant la Révolution" ("The map of the French dioceses before the Revolution") by Jacques Dubois, appeared in Annales. Dubois gives a lengthy description of the problem of identifying the boundaries of the dioceses as they changed over the centuries. He also gives what are probably the best, simple maps of French dioceses at different periods:

Neither Dubois nor Duquesnoy attempts to list for each diocese the parishes it contained. (For locating a parish, we describe some of the tricks we have tried here.) We cannot really recommend this Atlas because it is not what its title says, unless you are building a library and are happy to put this in a corner of it. More useful would be to download Dubois's article and, where appropriate to your research, examine the sources given in his excellent footnotes.

Would someone please write the book, complete with many maps, that we need?

Posted at 10:07 in Book and Magazine Reviews, Methodolgy | Permalink | Comments (3)