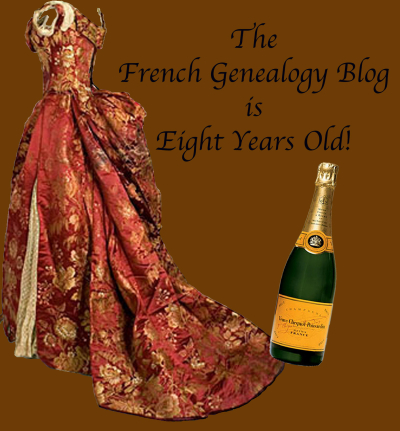 Time to break out the Veuve!  We have been writing The French Genealogy Blog for eight years. In that time, we have offered up to you Dear Readers:

As with our previous birthdays, we would like to thank you all for your loyalty by offering a token of our appreciation. This year, it is our own French Genealogy Glossary, with an emphasis on the words most often found in parish and civil registrations. (A link to it in the right-hand column, under "More!" will remain permanently.) We hope that this will help you in your research and that you will continue reading and telling others about  The FGB for another eight years.

For Researchers of Huguenots - FamilySearch Adds Scans From the SHPF 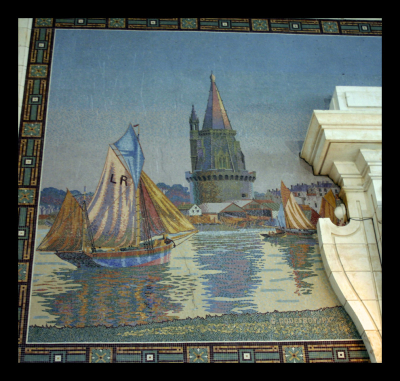 Things are in a bit of a tizzy today as all of France goes to the polls for the first round in electing a new president. Here, there is still sanity in the procedures. There are two rounds of voting. In the first one, all candidates have their name on the ballot; there are eleven this year. When the votes are counted, the winner would be whoever were to receive more than fifty per cent of the votes. As it is rare for that to happen, the two candidates with the most votes then go to the second round or run off  and the winner of that will be France's new president.

As to publicity and marketing, that too is quite civilised. There are debates on television. The candidates tour the country and make speeches. One of them this year got quite a lot of publicity -- but no increase in support -- by giving one speech in a number of places at the same time via hologram transmission à la Princess Leia. As to posters and advertising, each town puts up a board on which each candidate's supporters may put up one, just one, poster. They are all the same size. Currently, they all have the same amount of defacing. A few days before the election, each registered voter receives an envelope that contains campaign material: for each candidate there is one, just one, A3 size sheet, folded to make two pages, printed on both sides with their slogans, claims and manifestos. No one is allowed more, all decidedly equal and fair. Such a sedate affair compared to the madness in our homeland.

Now, to genealogy. We have been asked lately and repeatedly by readers to visit for them the Bibliothèque de la Société de l'Histoire du Protestantisme français in Paris. We do adore the place, which we have described here, and we would never turn down an excuse to go there, where the staff are so kind and helpful. However, it seems that many of you, Dear Readers, are unaware that large numbers of their manuscript holdings are now online, free of charge, on FamilySearch, in a jumbled and irrationally made list. These are available digitally only and not on Family History Centre microfilms. For the large part, these are Protestant baptisms, marriages and burials from registers found all over France, including Paris.

We would never deter anyone from visiting the City of Light but it is now no longer necessary to do so to see these registers. Have at them!

Researching an Ancestor in the Forces Françaises Libres 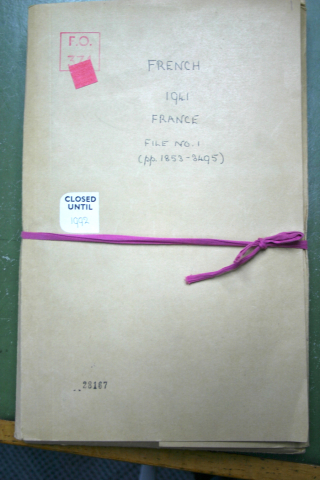 The Battle of France took place during May and June of 1940 and ended with the fall of France. Many of the military and government escaped to London and there, on the 18th of June, Charles de Gaulle issued his famous Appeal:

This was the initiation of the French Resistance and of the Forces Françaises Libres, the Free French Forces, based in London. If your ancestor answered de Gaulle's Appeal, it may not be so easy to trace him or her, as descendants are discovering.

Those working within France all had false names, noms de guerre, as did many of those working in London and elsewhere. This was necessary not only for secrecy but to protect their families still in occupied France. This was especially true for those from eastern France and the regions of Alsace and Lorraine, where many surnames are Germanic; at such a time, none wanted to appear as one of the enemy. Code names were often assigned to Resistance fighters, but many chose their own aliases, which could contain a hint as to their identity that only those who knew them well would have recognised. To complicate matters further, many retained their noms de guerre after the war, legally changing their names and giving the new surname to their children.

How to document these people? It is a long and cautiously researched project. Here are some of the sites we have used with at least some level of  success:

It can take quite a few months to do a search on a member of the Free French Forces, and it can be very frustrating, but you could get lucky. 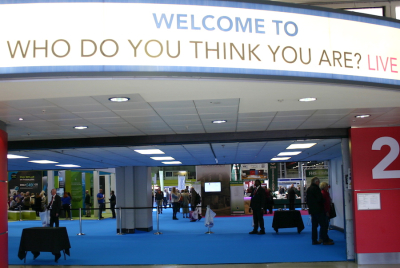 We have left The Hexagon for Albion and the Who Do You Think You Are? Live 2017 mouthful of a genealogy extravaganza in Birmingham. It is vast, quite noisy if compared to the archives we usually inhabit, fascinating and quite a lot of fun. We have attended numerous talks on British genealogy. We met with the erudite and engaging Peter Towey of the Anglo-German Family History Society, who regaled with tales of DNA discoveries. We have reconnected with Marie Cappart, Belgian genealogy expert, at a stand about the Mons Memorial. 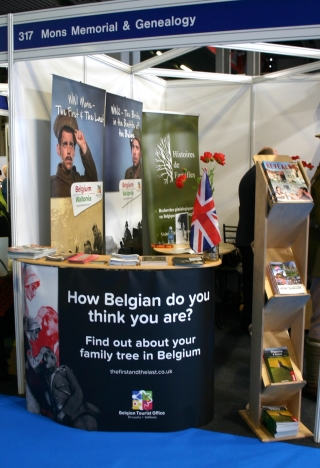 We are most disappointed that Yvette Hoitink, Dutch genealogist, was recovering from illness and could not make it, but we will be socializing with colleagues from the Association of Professional Genealogists, who are running a lively stand. 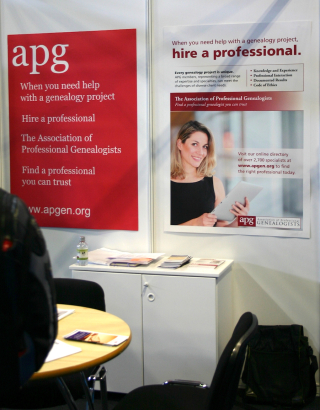 Most of the stands representing the various British counties and countries are linked to the Society of Genealogists, one of the organizers of the show. Their list of workshops is impressive, and we have had a great deal of fun serving on a table in their "Ask an Expert" camp. This is run, as one person described it to us, like a speed dating event. Genealogists wait at tables, computers at the ready, until a bell is rung. At that point, a stampede of researchers bent under their brick walls comes hurtling toward us, fanning out, one to a table. We have twenty minutes together to try to solve the genealogy puzzle. Then, the bell rings again, the researcher departs with new possibilities, and the next stampede surges toward us. A full day of this could lead one to start humming "Ten cents a dance", but for a couple of hours, it is incredibly jolly. We shall be there again today, so do charge our table if you've a mind.

We do feel that the French were under represented. Where was the Huguenot Society? Nevertheless, an excellent junket which we hope to repeat in years to come.

Posted at 09:05 in Genealogy Travel and Tourism | Permalink | Comments (0)