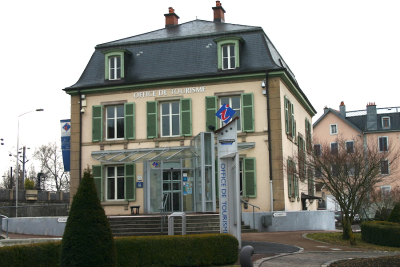 For quite some time, we have thought that certain towns and cities in France really have been missing a tourism opportunity which is to welcome and encourage those seeking to research and to discover the origins of their French ancestors. La Rochelle and Le Havre certainly could do more, if Paris did anything at all it would be a grand thing, Calais and Boulogne-sur-Mer might take note. All should be watching the innovative and trail-blazing Montbéliard.

We had read a fine thesis on Montbéliard's programme for advancing genealogy tourism, tourisme de racines, by Ms. Messane Lepape (Une stratégie marketing appliquée au tourisme des racines at www.isthia.fr). It inspired us to contact the town's tourism office to learn more. Instantly, really, instantly, we received a reply from Madame Evelyne Boilaux, in excellent English, arranging a meeting. On the appointed day, she welcomed us at the Montbéliard tourism office, just in front of the train station. Petite, pixie-coiffed and energetic, Madame Boilaux offered us tea or coffee and launched, with understandable enthusiasm, into the glories of Montbéliard's mostly non-French and non-Catholic history. We then shared our lists of the many waves of emigrants from the city to other lands.

Thus, if your ancestry includes a Foreign Protestant, a governess, watchmaker, Mennonite or Protestant from the Montbéliard region, you may be interested in what the tourism office has to offer. If you arrive on a weekend without having contacted anyone in advance and with none of your research to hand, your visit will be a failure. If, however, you prepare your family history, preferably with photographs, clearly formulate your research questions and know the places you would like to visit, then Madame Boilaux and the staff of the tourism office can help to make your visit a success, taking advantage of their well-established network within the religious, genealogical and historical communities. (2020 Update: Mme. Boilaux has retired. You may now contact Mme. Deborah Reichert, who encourages you to contact the Tourism Office via the e-mail given below.) Given enough time to prepare, she can arrange:

The more information that you provide in advance, the better will be the tailoring of your visit to your interests. Start planning now for this summer.

Madame Boilaux also allowed us to photograph this charming map of the seigneuries of the principality of Montbéliard in the sixteenth century: 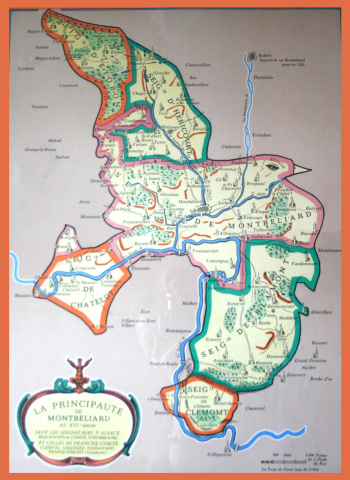 Find Your Ancestor in the Registers of the Bureaux des Hypothèques

We have had quite a few happy successes in locating all of a person's heirs in France by using the the registers of the bureaux des hypothèques. Literally, the word hypothèque means mortgage in English, but the function of the bureaux covers more than that. Much has to do with property taxes and there are many columns for figures and calculations in the registers under scrutiny here. As anyone who reads this blog regularly will know, columns of figures drive us to dizziness and nausea very quickly so, if we can have successes with these registers, anyone can.

The bureau des hypothèque is a registration centre of all land and buildings, the names of all owners, the taxes levied on the property, any laws and ordinances pertaining to it, any leases or mortgages concerning it, any transfers of ownership or leases or debts. (No title search issues in France!) The bureaux des hypothèques were a creation of the French Revolutionary government, to take the control of land out of the hands of the crown and aristocracy and put it into the hands of the new government. They were abolished in June of 2010 and replaced by a section of the tax authority, which carries out the same function.

It is the function of recording the change of ownership or names on leases or mortgages, coupled with another law, that makes the bureaux des hypothèques  so useful to the French genealogist. That other law is enshrined in the Civil Code and mandates that, when a parent dies, no child may be disinherited and that all children must receive equal shares of the parent's estate. This was and is so rigid that, as we have written before here (with a photo of one of the Parisian shops we most love to hate), many people did not bother to write a will. When there is no will but there is property,  or even a lease, is when the registers of the bureaux des hypothèques can be so helpful: all of the children and the surviving spouse will be named in the register called the Mutations par Décès when the death of an owner or lessor is reported.

The picture above is of the first paragraph of an ordinary entry that is a good example. Each declaration, in the column on the left of the page, must give: 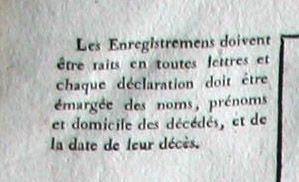 Then, all of the heirs must be named. Thus, on the first of June 1822, the heirs of Claude Joseph Bounot, who died at Solemont on the fourth of December 1821, made their declaration of his death at the bureau des hypothèques in Pont-de-Roide, Doubs. Roughly translated, the paragraph reads:

"Appeared: Jean Baptiste and Aimable Bounot, brothers, farmers at Solemont, representing also: Gabriel, Constance, Josephine and Virginie Bouvalot, all children of the late Françoise Bounot who, when alive, was the wife of Jacques Joseph Bouvalot of Solemont, and who say that Claude Joseph Bounot, their father [of the declarants] and grandfather [of the Bouvalot clan] died at the said place [Solemont] on the 4th of December 1821 ....."

Something of a jackpot in a single paragraph, non? We explain how to find the entries in the registers here. Increasingly, the indices to the registers of the bureaux des hypothèques are being put on the websites of the Departmental Archives (listed with links in the column on the left of this page) so your ability to access them will get better and better.

Finding an Ancestor Who Was an Escaped Slave in Saint Domingue

It is African-American History Month in the United States and Canada and we would like to highlight a most interesting website that helps to trace people who were escaped slaves in Saint Domingue, now Haiti. Bi-lingual and with excellent academic credentials, "Marronnage in Saint-Domingue" offers a way to search the public advertisements seeking the capture and return of such escapees.

The advertisements were placed in the Affiches américaines (we have discussed other such Affiches here) "the main gazette of the colony from 1766 to 1790". The advertisements give names, often the African country of origin, detailed physical descriptions, skills, ages. They make for depressing reading about human cruelty: 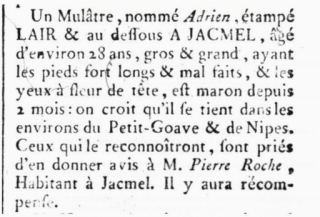 At the same time, the website offers hope not only to academics of Haitian history, but to family historians seeking and bringing to light their ancestors. Searches may be quite broad, on any word, a slave's name and sex, and the year of the advertisement, so there is a very good chance of success.

We wish you good luck! 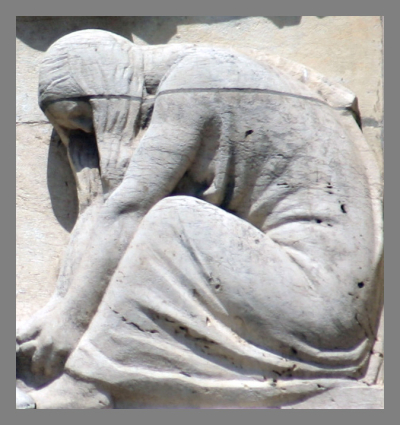 Refugees from war, oppression, persecution and cruelty can wander this world for an increasingly long time before they can find kindness, acceptance and help from those who, through a twist of fate, have been more fortunate. An added cruelty to the blighted lives of refugees can be the wrenching apart of families, of parents separated from children, of husbands from wives, siblings from one another, by fenced borders, arbitrary rulings, violent invasions, resettlement policies. As if they were clinging to different bits of wreckage in the open sea, they are pulled further and further apart.

The International Committee of the Red Cross and the National Red Cross and Red Crescent Societies have for some time been running a programme to help such families, called Restoring Family Links (Rétablissement des Liens familiaux), using the acronym RFL. They use a variety of documents, photographs and records in their effort to help refugees and migrants reconnect with or at least know what happened to their lost relatives.

At the end of last year, the French government relented a bit in its fierce protection of individuals' privacy (which has, as we have written before, imposed a closure of birth, marriage and death records for a significant period of time to protect the privacy of all persons mentioned in them) and passed a law allowing the nation's archives to grant RFL access to the closed archives for the purpose of reuniting families. This is explained in full on the LinkedIn page of Marie Ranquet, the curator of the Archives de France. A laudable bit of humanitarianism, we find.

We are contacted fairly regularly by people seeking to find missing family members. They tend not to be the refugees or migrants of today's disasters, but older people whose families were divided by earlier events and migrations. Where their searches have required access to more recent French records, we have been unable to help. This new legislation could provide some hope and possibly some success to those of you who have presented us with such quests.

The RFL will help anyone whose family was separated by migrations and wars  -- including World War Two -- or crises or attendant bureaucratic cruelties. Try the RFL search, which is very simple and easy to use, and is in English, French and other languages, to begin the process. We wish you the best of luck.