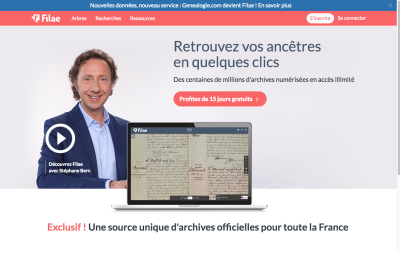 We have held off writing about this because we wanted to give it a proper try-out. We have spent the last week or so really putting Filae.com through its paces and really are so impressed.

A couple of years ago, we were so fed up with the mess that was généalogie.com that we had some little rants here and here on the FGB. To be sure, not all of those problems mentioned there have been cleared up, but still...what a facelift!

The search pages and results pages are much easier to see and use. Sifting results is now possible using three categories:

A perky little presentation is made by Stéphane Bern, a well-known royalty journalist in France with his own website on any and all royals of the world (where the difference between La France and the rest of the world is so evident on the "Boutique" page. No shoddy T-shirts with pictures of kings and queens or mugs or books, just a single box of elegant sweets on offer).

The real excitement about Filae comes from the fact that it has formed partnerships with some Departmental Archives and, rather excitingly, with at least one major municipal archive to present their parish and civil registrations online. Indexed. It is early days yet, but this is bringing us closer to the dream of many for a single index to all of the parish and civil registrations of France, from the sixteenth to the twentieth century. At the moment, those departments and the one city represented on the Filae website are:

These departments and the one city may be considered by some as traitors and by others as clever. For some years now, since at least 2010, the parent company of généalogie.com, Notre Famille (which now trades as Filae), had been fighting in courts to be able to present the same images of documents as the archives do on their own websites. To repeat what we explained here before, the commercial point of view has been that there is a market for such a unified index, while the genealogists of France have bemoaned that what has been free might no longer be so, as well as that the main source of income for genealogy associations has been their printed booklets of painstakingly extracted data from millions of parish and civil registrations. Because of this last point, even the august Fédération Française de Généalogie strongly opposed this commercialisation of the nation's heritage, as it has been put so often.

A few years down the road and it is clear that Toussaint Roze, the founder, has not and will not give up. The websites of the Departmental Archives remain free and some of them are encouraging collaborative indexing. The genealogy associations have not (yet) disappeared and have embraced the Internet as a new way to sell access to their extracts, on Bigenet, on GeneaBank, on Geneanet and yes, on Filae.

Tell us what you think. Around the world, today has been about women, so we have decided to write of a conundrum about women that has puzzled us for some time. For most of the nineteenth century and up until 1922, it was possible for a birth to be registered in France without naming one or even both of the parents. The registration usually would be made by a midwife, sage femme, or more rarely by a doctor. The child's sex and name would be given. The father would be identified as simply "unknown father", père inconnu. Alternatively, the father and possibly also the mother could have been "not named", père non dénomé or mère non dénommée. This was usually done when a child was illegitimate and the mother or both parents wanted no record with their names linked to such a child.

In French law, even if the child stayed with one or both parents, if they did not formally recognise the child, reconnaissance, he or she had no rights of family relationship, such as inheritance. If a woman wanted to abandon a child at birth without breaking the law, there was later a procedure to give birth completely anonymously, informally known as Accouchement sous X. (We recently noted a facebook group of such children trying to find their birth parents.)

Our conundrum comes from a pattern we have begun to notice. Rather a lot of people have told us of an ancestor who appears, seemingly out of nowhere, on a British census as a small child, living with his or her mother. The mother and the child have the same surname, but there is no father in the household. The census shows that the mother married in France and that the child was born in France, often in Paris. Yet, while the birth, with parents unnamed, at times may be found, a search for the marriage will be fruitless, when it should not be so.

We begin to wonder if anonymous parents on a birth registration were not possible in Britain? (We know nothing of British genealogical research.) Is it possible that, for women who could afford to do so, coming to France to give birth anonymously and then returning with a new name, was actually a practice at one time? Dear Readers, have any of you come across this? Do, please share your tales.

In Britain, once birth registration began, in I think 1837ish, an unmarried mother usually gave her own name, and the baby's surname would be the same, with just a gap where the father should be. I have a grandmother and a great grandmother both of whom have missing fathers on their birth certificates. Before that in the early 19th century, 'natural born' children are very common in the parish baptism registers. The country was somewhat relaxed in its morals and less keen on church going. It took the vigour and renewal of the Oxford Movement to rebuild the dilapidated churches and change the devotional and 'moral' sensibility of the nation.

In the early years of the century, quite often working class or trades families might have the baby first and then get marred when they could afford to. By the time my grandmother was born in 1895 illegitimacy was such a disgrace that through her entire life she never admitted it, and was told that both her parents had died by the grandparents who brought her up.It was only later that she discovered the truth, but burned the letter and never told her children who her father was. So in the mid to late century, I wouldn't be surprised if inventing marriages in Paris was a desirable option, but I am not sure whether it would have been practical. Isn't it more likely that the marriage records are simply difficult to find, especially if they were before the Siege of Paris and the Franco Prussian War? If they just made up the marriage to cover the case, the mother would have to stay abroad a long time to be convincing. Perhaps they married at sea, which would be a different set of records. Incidentally the census returns do not ask where one was married only where born. Most likely the confinement was in Paris but there never was a marriage.

We have received a missive from a student of genealogy who is working on her "accreditation for France through the ICAPGen". She asked about specifics concerning the different departments that would be useful for a researcher to know, adding "for example...what makes a certain region stand out or be unique...as far as their documents?"

We have, of course, produced a booklet on our visits to some of the Departmental Archives, in which we discuss their collections, facilities and services (see the column to the right on this page, or click here.) Yet, perhaps all of you, Dear Readers, might wish to know a bit more on this subject, so we thought to consider it more deeply.

We can make no claim to know where all special collections are stored throughout France, nor even to know, of the some one hundred Departmental Archives, all of their best secrets as to documentation. However, here is what we have come across:

Links to all of the Departmental Archives websites can be seen in the left-hand column on this page. Have any of you Dear Readers found other specialised collections that have been particularly useful? Please do tell in the comments section to this post.

Lastly, we recommend to the student whose question prompted this post to read as much French history and geography as possible and never to stop. Only by knowing more about France and its people will you become expert at researching French families. Good luck with the accreditation! 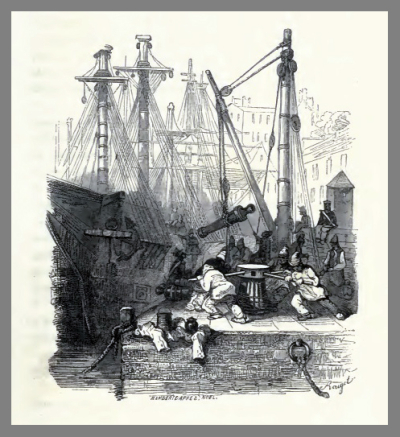 The new year has begun oddly here in France. Many are down with the stomach flu, le gastro, and many others with serious chest colds, le flu. Night temperatures drop to ten degrees below zero, Centigrade, and jump to twenty-five degrees during bright, sunny days. The fruit trees are quite dizzy trying to get it right, some blooming, some remaining dormant, others still with last autumn's withered bounty adorning their branches.

We have been directed to a website that exhibits something of a similar dizziness. Le Bibliothèque numérique du Centre de recherche bretonne et celtique (CRBC), the Digital Library of the Centre of Breton and Celtic Research, has digitised and put online a strange collection of whatever pleases the librarians, it would seem. Among the collections of song competition entries and sheet music are the first nineteen registers of forced labour and penal colony prisoners in Brest, the forçats and bagnards.

By way of background, we have discussed the penal colonies here, and researching the detailed files on individual bagnards in the Archives nationales d'outre-mer here. We have reported on the ANOM representative's discussion of the penal colony files here and, lastly, one of our favourite websites, Criminocorpus, has put together a most impressive study guide on the subject here.

If this be your field of study, whether for a doctoral thesis or to find that criminal ancestor, these newly digitised registers could be of help, but it will not be a piece of cake. These registers are from the archives of the Service historique de la défense branch at Brest. A couple are correspondence ledgers, being mostly copies of letters to superiors, noting arrivals and departures. The rest have full paragraphs about the prisoners, giving a lovely amount of detail, including parents' names, place of birth, physical description, the crime for which condemned and the length of the sentence to be served.

Isaac Liecthy [possibly a Mennonite, for that surname was quite common among the members of that sect in France] for example, prisoner number 40,079, was the son of Christ Liecthy and Marie Coline [?] and the husband of Anne Marguerite Meunier. He was a goldsmith, aged twenty-eight years, and was born near Neufchatel. He was five feet one inch tall, with dark brown hair and beard, brown eyes, a large and long nose that bent a bit to the right, a round chin, a high forehead with a scar. He had been condemned in Lons le Saunier, on the 17th of pluviôse, Year V, for stealing from the inn where he was staying, and was to serve eight years. [Register number 2018, page 295]

You would need to know that the person you are researching passed through Brest -- rather than via another port -- on his or her way to a penal colony, and you would need to know approximately when. Then, you would simply have to hunker down and start reading the registers. Mostly, they are from the eighteenth century, with just the last two volumes, numbers 2018 and 2019, containing entries from the early nineteenth century. Some entries have only the name and no detail at all. The penmanship is a delight to read, so why not try your luck?