Acadian Treasure in the Municipal Archives of La Rochelle 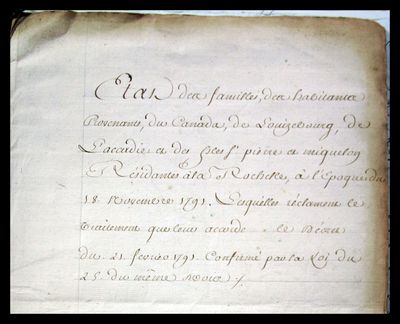 Recently, we had occasion to return to the lovely little city of La Rochelle, which is graced with two excellent archives facilities -- Departmental and Municipal -- and another  -- naval -- not far away in Rochefort. On our previous visit to the Municipal Archives, things were a bit fraught within but, whatever the trouble was then, it has been resolved. Service was much improved, staff were cheerful and helpful. There was a slight sense of thrill in the air, perhaps because a move is planned, though the new location has not yet been determined.

We were on the hunt for an Acadian voyager, a person who had been among the French Canadian deportees from Nova Scotia after the British conquest in 1759.  We knew our subject was in La Rochelle in the 1760s and that was about all. Having exhausted all that the archives had online, it was time for us to go and page through original documents in the archives. This we did, coming across a wonderful census of part of the community of Acadian refugees who were still there in 1791.

When the refugees had first arrived in France, in Saint Malô, Cherbourg, La Rochelle and elsewhere, the king decreed that they should receive some aid, as many were destitute. After the Revolution, the government wanted to know how many of those refugees were still receiving aid, some thirty years later. Presumably, each town did such a census and reported back to Paris. The one in La Rochelle is truly a treasure. 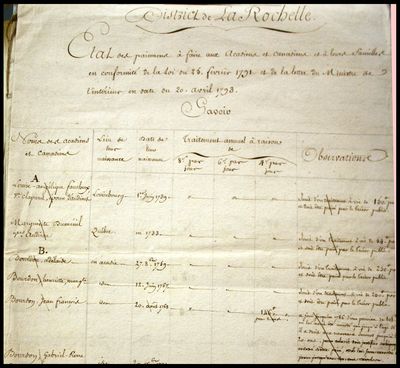 However, it contains the names of only those deportees who required assistance. Others, who had relatives, business interests or money in La Rochelle, are not on the list. Thus, though not a complete census of all those who were in La Rochelle, it is a superb source of detail on some of them. The lawyer, Claudy Valin, has written an excellent study on the group, using this census, entitled: Les réfugiés de l'Acadie et du Canada à la Rochelle, which can be downloaded.

Our subject was not on the list, but we had a lot of fun reading this and other documents, some of which we will discuss anon. We were so happy requesting all possible interesting cartons of documents that we wore out our welcome with the newly friendly archives assistant. "How much more of this are you going to do?" she snapped.