Did Your Ancestors Lose a Child to Killer Wet-nurses? 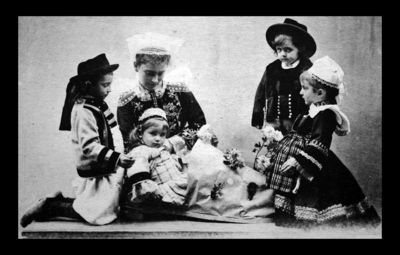 There are babies who are well cared for and there are those who are not. There seems to be quite a lot of interest at the moment among French bloggers about children who died when with wet-nurses, nourrices in French.

Le blog d'une généalogiste wrote a post entitled "The massacre of foundlings and suckling babes".  He quotes a doctor writing in the mid-nineteenth century who wrote that he was certain that certain bad wet-nurses killed intentionally the babies in their care, that mothers knowingly placed their children with women who had a reputation for letting babies die. The doctor called it a form of infanticide not punishable by law, while abandonment of a baby was.

On the blog of Histoire-Généalogie, Serge Bouvart contributed an article entitled "A wet-nursing village, or the tragic destiny of Paris's foundlings". During the eighteenth century, he writes, the village of Esquéheries in Aisne subtly slaughtered dozens of children. One family managed to kill thirty-four babies and no one seemed to bat an eye.

To be sure, in our research, we have come across the telltale sign of a child who may have died at a wet-nurse's. In trawling the parish and civil registrations as we follow a family, we will find the baptism or the birth registration of a child and then no trace of him or her again. If this were after the first French census, in 1836, we check the family in the census returns but still do not find the child, the next step is to look for a death in the region. Almost always, we will find that the child died in early infancy in a town not very far away in the home of a wet-nurse.

But were they killed? Did the parents send them off hoping never to see them again? Perhaps, but we would very strongly dispute that. In truth, we suspect filth and disease to have been the more likely culprits. Long before antibiotics or Dr. Snow's discovery of the benefits of hygiene, when half the population had tuberculosis, when there were regular epidemics of cholera, small pox, diphtheria, scarlet fever and so many more, it was quite a miracle that a baby survived, not a surprise that he or she died.

In the Archives nationales, there is a letter* written by the mayor of the small town of La Villeneuve-lès-Charleville, requesting aid for one of the citizens, one Marie Claire Renard, wife of Jean François Jacquier. At the age of thirty-eight, being of robust health, she went to Paris in 1806 seeking work as a wet-nurse. She went to a home for foundlings and was assigned a child. However, the child was syphilitic and Madame Jacquier, ignorant of the disease, was infected. The child died and the disease progressed horribly in the poor wet-nurse. Treatments failed. Monsieur Jacquier contracted the malady as well and could no longer work to support his sick wife and their own three children. The good mayor pleaded for them and thought (well before his time) that the home for foundlings bore some responsibility.

It is very easy to forget how difficult, unsanitary and ignorant life was two hundred or more years ago and how very different it was from modern life. When doing genealogical research, it is important to be on guard against our assumptions which may be based not only in our culture, religion or education, but in our modernity.

Three years ago, we wrote here of wet-nurses and a Dear Reader contributed an excellent post about researching an ancestor put out to a wet-nurse (and who survived!) As another suggestion for researching a child who may have died at the home of a wet-nurse prior to 1790, we propose that you try searching the Inventaire Sommaire for the relevant Departmental Archive on the Internet Archive or Gallica. Use the surname of the child and the words en nourrice in the search box.