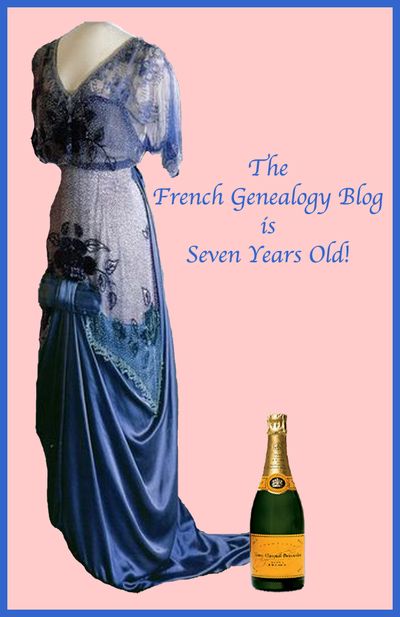 It is really a bit of an astonishment for us that we have come to the seventh birthday of The French Genealogy Blog. Seven years of posts explaining how to research your French ancestors, one book on French genealogy, eight booklets on specific areas of French genealogy and numerous visits from you, our Dear Readers, come all the way to France to discuss and research with us your French ancestry.

We are a natural researcher, have always felt most at home in libraries and archives, so these past seven years writing about French archives and research have been most entertaining. Yet, more than that, we have deeply appreciated the way that we have been welcomed into the French genealogy community and thank you, Dear Readers, for the warmth and kindness with which you have encouraged us via your comments and messages and occasional visits.

By way of thanks, we would like to remind you that the FGB Free Clinic is still taking your requests for help with your brick walls. Please do send in your conundrums and queries, clearly explained and showing the research that you have already done. If we can be of help and if we think that your case is representative of what others would like to know, we will do our best and put our research up here on the blog. We hope that you will also raise a glass of the widow's finest with us in celebration.

On a different note, we ask your help for someone, please. Many years ago in Paris, we listened to a presentation given by the vastly successful American blogger in France, Kristen Espinasse. It was she who inspired us to begin the FGB and she whose advice and example helped us on innumerable occasions. Now, her husband, prone to depression, is in an exceedingly dark place within himself and has been for some months. If you have ever been there, you know how crippling it is; if you have ever loved someone lost in that darkness, you know that it is as agonising as helplessly watching over a dangerously ill child. Please, if you know of some words or ideas that may be of help, write to Kristi here. Thank you.

Was Your French Ancestor Taken Prisoner In the Bay of Biscay? 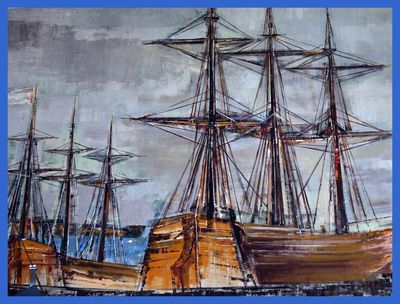 The Battle of Trafalgar was fought on the 21st of October 1805, between the British, under Admiral Lord Nelson, and the combined French and Spanish fleets, under Admiral Villeneuve. The British victory gave that country naval superiority for the rest of the Napoleonic Wars. Nelson was killed, Villeneuve was captured. The British lost one thousand five hundred men killed or wounded, while the French and Spanish lost fourteen thousand. No British ship was lost, but eighteen of the thirty-three French or Spanish vessels were. Eight French ships were taken by the British as prizes. Two were recaptured by the French and the other six sank or were wrecked before they could be taken in to a port.

On the 4th of November 1805, Captain Richard Strachan of the Royal Navy captured in the Bay of Biscay, an action known to the French as the Bataille du cap Ortegal, four French ships which had fought at Trafalgar and these he did manage to take in to Plymouth as prizes.

Those four vessels were the:

Were the complements full, that would have made for a bit less than two thousand eight hundred French prisoners.

The National Archives have digitised and put online the muster rolls and other documents taken from these ships. The records are online and may be searched by ship name or by an individual's name. The images may be ordered (costing a bit over three pounds usually) and downloaded in minutes.

With the details you may find, you may be able to advance your French research significantly.

To Make a Donation to the Paris World War I Memorial

In our last post, we begged our Dear Readers to make a donation to the Paris World War I Memorial. Many apologies that this turned out to be trickier than anticipated. There are four screens to the process, which we have printed and annotated in English. Click on the pictures of the screens to see larger versions.

Screen one describes the memorial and its cost. Click "Faire un don" to start the donation process: Screen two confirms that this is the project (as there are others) to which you wish to donate. Click "Je donne": 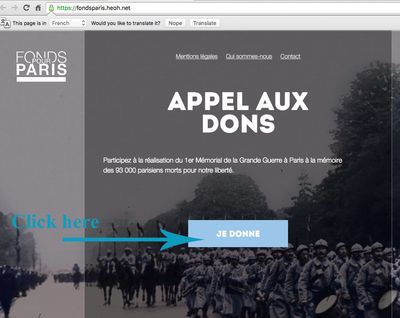 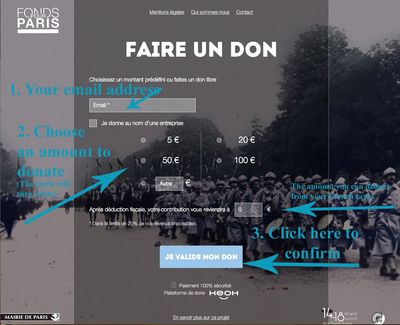 Screen four is for your credit card details. From that, you will be taken to the payment confirmation or your bank's authorisation page.

Very nice to know that so many people are keen to donate!

A few years back, when we first brought out French Genealogy From Afar, our book based on posts from this blog, we received a very snide message from a Dear Reader. "People like you always try something like this, making us pay for what should be free. Good thing I have printed off every one of your posts so I won't need your book." He was a loner, thank the heavens. Every other Dear Reader who has contacted us has been supportive morally and sometimes financially of The French Genealogy Blog and we are very grateful indeed.

The point we wish to make is that much of the research possible via the Internet is shared freely, but it is not free. There are many people, and we include ourselves here, who are spending their own time and money, their effort and creativity to help unknown others with their research. This is particularly so with the many, many departmental, municipal, national and military archives websites available at no cost to the user. Most of these are paid for by the French taxpayer, but there is no requirement to prove one is among those taxpayers to be allowed to use the many websites that we have explained here to research one's French ancestors.

Now, there is an opportunity to contribute in a very nice way, we think. The city of Paris lost over 91,000 soldiers, military personnel and civilians in the First World War. While every town and village in France has a Monument aux Morts listing the names of those lost in the Great War, Paris has never been able to build a monument for so many, many names. To be sure, there are smaller monuments around the city, but not one honouring all her war dead. One is now being built on the banks of the Seine by the Pont de Sully, not far from the Place de la Bastille. Said to have been inspired by the heart-rending wall at the Mémorial de la Shoah, it will contain every name of every Parisian who died in the First World War. It is scheduled to be unveiled on the 11th of November 2018, the one hundredth anniversary of the war's end. Money is needed. Donations may be made here. If you are one of those who has been enjoying the many free resources and would like to say thank you, please do consider doing so by making a donation to the monument.

For those who will never be able to visit Paris, the monument's  thousands of names are available to be searched now, on a new website, a "virtual monument" to the Parisians who died in the Great War. It can be searched by name, arrondissement, or year. One can also simply read through the list of names. This list is not a duplication of the First World War section of the  Mémoire des Hommes of the Service Historique de la Défense. It includes much more. The names are taken from books of honour, livres d'or, made by each arrondissement and listing those who died of their wounds, civilians who were killed and others; the criterion was that one died because of the conflict while performing one's duty to one's country. The website is yet another fabulous resource for anyone researching an ancestor who may have died in Paris during World War One. Use it, enjoy it and we hope you will, just this once, pay for it. 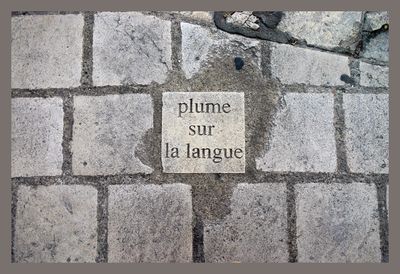 There are some interesting and rather pertinent topics being discussed just now on the blogs of some of the French genealogists which we should like to share.

The excellent Chroniques d'Antan et d'Ailleurs, which we have mentioned before and which is written by Brigitte Billard, discusses DNA tests for genealogical purposes. Only recently here were we discussing the same subject and many comments showed a tad of confusion as to what is or is not permitted in France. Thus, a discussion of DNA testing by a blogger writing in French for French readers is quite interesting, we think. She explains mitochondrial, Y chromosome and autosomal DNA to her readers and the limits of their usefulness. "The tests are not authorized in France, which I understand less and less......one must use a foreign company..." She then lists the companies -- all of them North American -- that she considers worthwhile and gives her evaluation of them. France being a country that reveres intellectuals, she feels most comfortable with the academic Genographic Project and least so with the Google connections of 123andme. In the post that follows, Brigitte discusses the thrill of finding a distant cousin via the test results.

Probably the best blogger on genealogy in Alsace is Antoine Baumgartner, who writes Elsasser Wurtzle. His work is thorough, his explanations clear, his choice of subjects interesting. Recently, he has added much more on his research into Alsatians who went to Argentina, where they are known as Alsacianos. Though he covers mostly personal research, he explains his processes so well that anyone researching ancestors from Alsace would do well to read his blog regularly.

The anonymously written Blog d'une généalogiste does what many a researcher would love to do in writing small stories about the lives revealed in archival documents. Each one is a treasure. There is also much discussion, apparently in response to questions from readers, about professional training for genealogists in France. Reading this blog will not advance your research much, but will greatly satisfy those who appreciate the forgotten people of history.