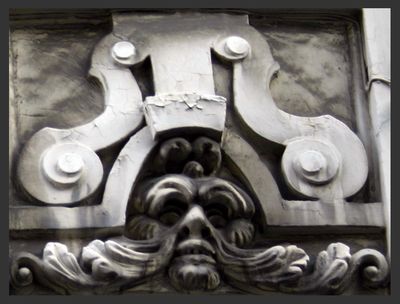 We like to think that the genealogy craze that has swept the Americas and Europe is aiding in the democratization of French people. No longer is the subject seen as the snobs' domain, where those who really were without tried to prove aristocratic ties. Nor is it solely the territory of the heir researcher who guarded his or her sources against the competition with some extremely rude ferocity. Increasingly, ordinary folk are pleased to find their family's place in France's illustrious history, once they can find out who their family may have been.

The French mind when addressing history and thus, by inclusion genealogy, is one that is content with facts and rarely shows interest into their meaning: if something is, it is, what difference does it make why it is? Nevertheless, that keen French mind cares deeply that the facts be correct, true, verifiable. Hence the glorious excess of detail in French civil registrations, the French genealogist's first stopping point.

As the genealogy passion increases in France, the websites of the Departmental Archives increase their online riches with what is the second stopping point: notarial records. The Departmental Archives of Vendée have just put online images of 310,000 notarial actes. The National Archives, as we have written here, have been putting up images of the lists, or répertoires, of the thousands of actes of Parisian notaires. The Departmental Archives of Yvelines have added images of their répertoires to their website. The website Familles Parisiennes, which we discuss in our booklet, have a number of simultaneous projects to put online images of Parisian notarial records. We predict that many more archives will follow suit and that you, Dear Readers, will be able to dig much, much deeper into your family history.

It is impossible to overemphasize the value of notarial records. The profession of the notaire is older than the country of France. For centuries, they have been documenting French lives.

"Their recognized functions were those of public officers of high probity authorized to receive directions from parties and prepare their acts and contracts, to give them validity, certain date, preserve them on deposit and deliver exemplifications and certified copies of them as required. The records of their offices, embracing their own activity and that of their predecessors, constituted the muniments of title to real property, evidences of marriage settlements and wills of many generations, in their several jurisdictions. They had become the trusted counsellors of their clients and often served as amiable arbitrators in their differences. They gathered they last wishes in testamentary form and afterwards regulated the rights of heirs. They aided in investments and advised how to repair the errors of business judgment. In fact, few affairs of life or death could be regulated without recourse to some member of the notariat."*

Practice reading French and prepare yourselves for this glorious deluge.

N.B. - Be sure to read the comments to this post.

Win A Prize for Your Family Genealogy 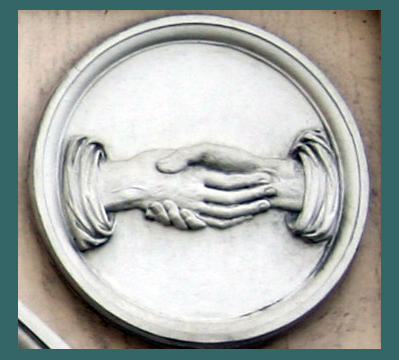 There are now two prizes on offer for genealogy monographs in France. One is to be announced at the next Congrès national de Généalogie this October; the other - the Prix Floucaud de La Pénardille et Dr. du Chalard --  is to be announced next year and is still open for submissions. The award for the latter is 1500 euros, three times the amount for the former.

The Prix Floucaud de La Pénardille et Dr. du Chalard is offered by La France Généalogique every two years, usually announced in November. It is open to all non-professional genealogists. If you have written a book about your family history, why not submit it for the prize? To be considered, it must be:

The judging committee will consider:

To submit your book for the prize, send two copies, which will not be returned, to:

There seems to be no form to include, so it may be wise to write a letter explaining that the books are in submission for the prize. You must also include a letter authorizing the publication of a chapter from the book in the Revue of La France Généalogique and on their website.

The deadline for submissions is the 31st of March 2016. 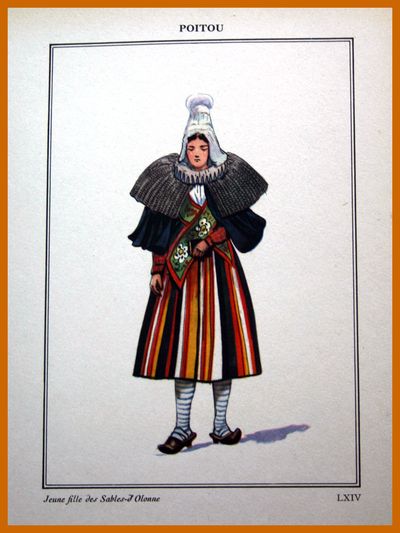 Many of you, Dear Readers, write that you are descended from Protestants of the region of Poitou. Snappy dressers, apparently, but not always easy to research. We have written often about Protestant and Huguenot research, and it is covered in one of our booklets. Recently, we discovered a personal website that, to our mind, is rather exceptional in its narrow and deep focus on the Protestants of Poitou.

Elisabeth and Guy Vidal set up a website about their own genealogies in 2002, and added much about Thomas Marché, a prominent Huguenot of the region in the seventeenth century. They seem not to have updated the site for a good five years, but have kindly left it for others to discover and use. Their site includes:

Such a mysterious place, the Internet, where the products of so many wonderful minds are allowed to see the light of quite a big day, in comparison with that of the local printer, and to drift before the public eye for longer than in the past. Most of it is extremely depressing, as one realizes just how mentally stunted so many Internet users are, but this little site, launched and forgotten, could yet be of use to someone out there. We do hope so.

Our outdoor thermometer puts the temperature at the moment at 40˚ in the shade at the moment, and our brain pretty much stops functioning at 35˚ but we shall endeavor to carry out our plan of discussing the value of probate inventory, or l'inventaire après décès. We have touched on them before, in a list of types of notarial records and in an early introduction to notarial records or actes notariés.

Wherever an estate is to be divided or if executors simply think it expedient, there will be probate inventory. It is performed by a notaire. All heirs must be present or represented. Normally, it is this listing of heirs and their relationships that give probate inventories their great genealogical value. But there is more.

The modern probate inventory, since 1792 at least, generally has four sections.

The probate inventory of Richard Ferris, (an Irish priest who rejected the Revolution's abandonment of religion, but accepted the end of celibacy by becoming a romantic partner and father, who spied on the French government for the English and stayed in Paris during the Restoration to run a Catholic college) runs to more than thirty pages. It was requested by his executors:

In the inventory for Lucie Cauchois, the detail and minutiae of possessions listed is endless:

The inventory for Pierre Lallemand shows many types of documents listed: 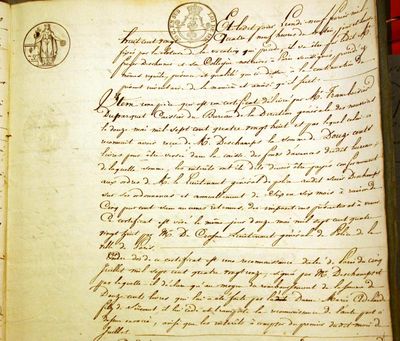 And it also shows they types of claims submitted:

While the list of possessions and the list of claims may show quite a lot about the personal lifestyle of the deceased, the list of document can be another part of the document to contain genealogical detail and also to lead to further research. It is here that one sees loans to friends and family, or companies that were formed or ended, shares bought in other countries, all property owned -- with names of those renting it, and all the other notes or letters the deceased did not want seen until after he or she were gone.

Richard Ferris had few possessions, but his fingers were in many financial pies, as the documents list in his probate inventory shows; it goes on for many, many pages. Another man left a letter explaining that the reason an unknown young woman was named as an heir in his will was that she was reputed to be his daughter; though he did not recognize her, he was leaving quite a lot of property to her "out of respect for her mother".

Often, further notarial actes are detailed, giving the information necessary to find them in the archives and extend the research. With this, one can get those as well. Inventories are clearly identified as such in each notarial étude's repertoire, as can be seen at the top of the page here: 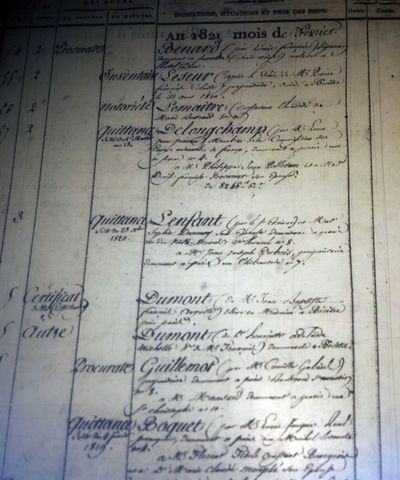 It can be long and tedious reading, but the rewards can be very interesting indeed.