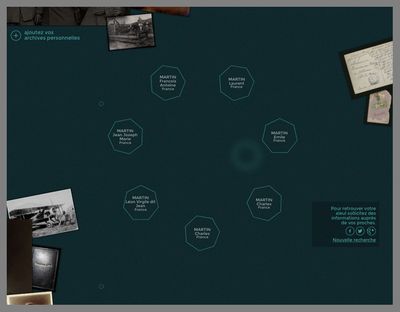 In November of 2013, all of the archives of France took part in the Grande Collecte, in which they asked everyone to look in their attics for letters, photographs, diaries, drawings and any other material from their ancestor's participation in the First World War. The result was a huge haul.

The newspaper, Le Figaro, together with a group of television companies and two quite gifted film makers,  Andrés Jarach and Kévin Accart, has taken some of that material and created a very slick and attractive new website on World War One entitled Générations14 Mémoires intimes de la Grande Guerre. It links to the Mémoire des Hommes database of the some 1.3 million French who died in that conflict, which makes it repetitive for genealogical research, but it offers so much more.

Initially, one can type in a surname, then add more details to find a soldier from the Mémoire des Hommes, and to see the card on his death. Then, there is the possibility to upload documents relating to him, and to see what others have uploaded. 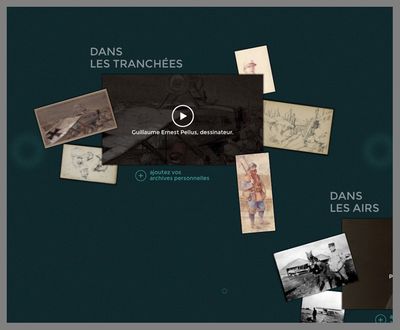 There are ten beautifully made short films about people, men and women, military and civilian, using some of the family archives gathered during La Grande Collecte. A nurse, a disfigured soldier, a wife and mother, a woman who wrote letters to soldiers, an artist soldier, a photographer, etc.  -- the story of each told simply and honestly. This is not hero-worship or propaganda, it is a presentation of real lives and the cataclysmic effects the war had on them.

This site is not only collaborative, but calls itself a "participative documentary". It could help to link descendants and families, as well as serve as a growing online archive. If it lasts, and it is not clear how it will. This is, in effect, high-end marketing. Will it be gone in ten years? Will the contributions that people upload disappear? That would be a pity.

Enjoy it while it lasts.

Hunting Down Your French Freemason Ancestor 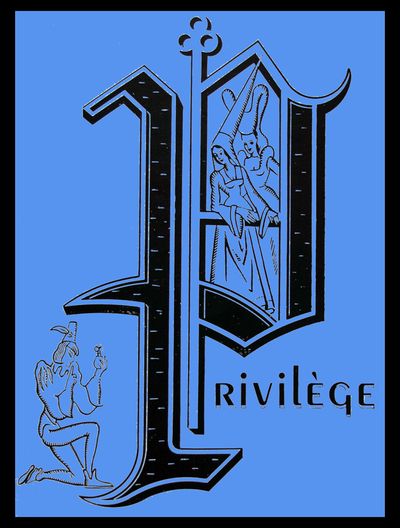 The fichiers (indices on cards) have been coming online fast and furious and another fine one for genealogists is available. The Fichier Bossu contains 130,000 biographical cards about French freemasons from the eighteenth to the late nineteenth century. It is probably the largest biographical collection of any single, French national group.

Some very exhaustive studies of regional groups of freemasons have been published, including those on:

However, only the Fichier Bossu covers members throughout the country. Importantly, it also includes foreigners who joined French lodges, including British prisoners of war and détenus of the Napoleonic era, American businessmen, Hungarian princes, ship captains on shore leave.

The cards vary greatly in the amount of information they contain, but many  give:

It was the life's work of one Jean Bossu, who then left it to the Bibliothèque national de France, where it was kept pretty much out of most people's reach. Now, it is available online, on the BnF's website of digitised works, Gallica, in 324 sections. Each section is a scan of about 500 cards, with no page numbers, so be prepared to trawl. As is usual with Gallica, results do not appear in any order, but we give here the Fichier Bossu results in correct order, to make things slightly easier for you.

To read further on the subject than our previous tiny post on French freemasons' signatures, there is always Wikipedia, but we suggest you try the website, Renaissance Traditionnelle  and the blog of Pierre Mollier. An article by Raphaël Baumard explains clearly where and why the masonic archives of France are scattered. This article in English gives an insider's explanation of freemasonry during Napoleon's years of power.

French Law Professors In Your Family's Past? 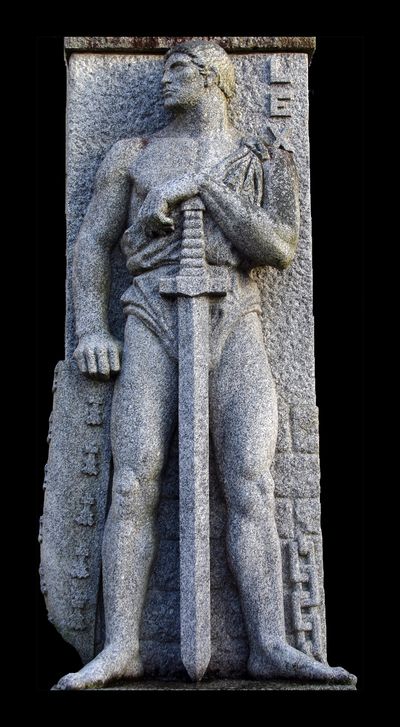 Here on the FGB we have discussed the many possible reasons your ancestor may have left France and how those reasons may help to discoveries of his or her origins. You may be descended from a young man avoiding his military service, or from a family opting to leave Alsace-Lorraine when it became German, or from someone who went to Quebec or Louisiana, from an adventurer who hoped to strike it rich in Mexico or Argentina, from a Communard, or from a bagnard. We have noticed, in our long and misguided life, yet another reason a person -- usually a young man -- may leave the land of his roots for somewhere, anywhere, else.

These are the sons of prominent, respected, pillar of the community, over-achieving, impossible to match fathers (see above). Unable to endure the weight of Papa's shadow, some sons run. Sometimes, they run very far. In our experience, sons of medical professors dominate this category, but sons of law professors are also known to bolt free of the paternal reputation and eternal comparison with it.

Should your family have stories of a French law professor in the clan, it is now possible to check up on that.   The website Siprojuris is that of the System d'information des professors de droit (the information system of law professors). Its content covers the late eighteenth through the twentieth centuries. It has three categories, each of which may be searched:

On the page about each professor are tabs for the categories:

The sources for the information are impressive:

The research has been exhaustive and would be very, very hard for a family genealogist, working from afar and without a French law background to do alone. Siprojuris will lead to the breaking through of some genealogical brick walls for a lucky few, we are certain, most especially for those researching their Parisian ancestors. There are twenty-three names of those born in Paris before 1860, all of whose birth and possibly marriage records were most likely burned in the fire at the Paris City Hall in 1871. We give their surnames here:

Even if these names are not among those you recognise in your family, click on the tab for Données familiales to check a spouse's surname. 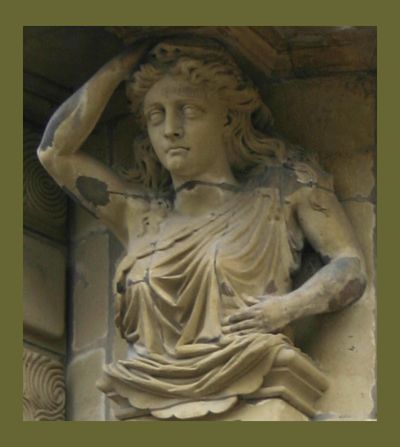 In one of our previous incarnations, we worked for British Aid in Entebbe and there met a southern belle quite out of her element. Cookery is often the refuge of a woman in distress (as we ourself learned later - see our booklet entitled "Identity Wars") and so it was for her, cranking her unhappy days away at a pasta making machine. Among life's mysteries is not that she ended up in Paris, a Cordon Bleu graduate, food author and caterer, but that we bumped into her in a cafe and recognised her. In the ensuing conversation of reacquaintance, she said that she had a country home in Nièvre. "Nièvre as in never go there; it is the coldest place in central France and totally boring," she announced somewhat bitterly, we thought.

Cold and boring Nièvre may or may not be, but its Departmental Archives deserve warm praise for being the first, perhaps the only, of their ilk to digitise and put online their collection of déclarations de grossesse, pregnancy declarations. This is a boon to researchers of women in French history as well as to genealogists researching their Nivernais ancestors.

It has been some time since we explained pregnancy declarations here, so we will summarise. Unwanted babies have a way of turning up dead more often than societies would like. One French plan to prevent this was to record in legal documentation all pregnancies, thus starting a monitoring process of mother and child and of any future disappearance of the latter. Few of the sixteenth century declarations survive; and the project was impracticable. By the eighteenth century, it was only those women who were unmarried or widowed who had to declare before a local authority that they were pregnant, and many of these declarations do survive.

Those in the Departmental Archives of Nièvre cover the years from 1758 to 1790. They are in Series B, under the code of 2 B 815. The fine folk in the archives have not merely made these pregnancy declarations available, but have worked with their local genealogists and palaeographers who have contributed their excellent skills to help online researchers to read the documents. Early documents are notoriously hard to read, but here, names have been transcribed and located. To read any particular name, hover your mouse's arrow over the green bubble and a screen with details will appear: 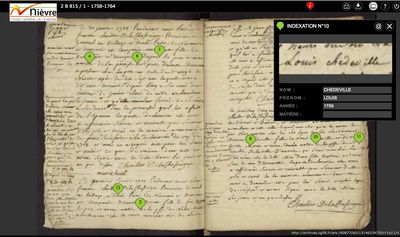 To view the image without indexing, click on the red letter i at the top of the screen. In the drop-down menu, click on "Afficher/masquer les index".

To find these fascinating records, go to the website of the Departmental Archives of Nièvre and click on the box for genealogy searches in the upper right-hand corner of the screen: 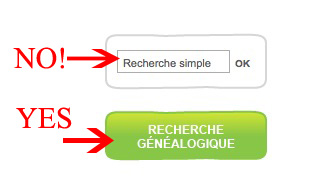 In the ensuing screen, type the word grossesse in the subject line:

You will then see a list of the record groups. To view one, click on the little eye to the right: 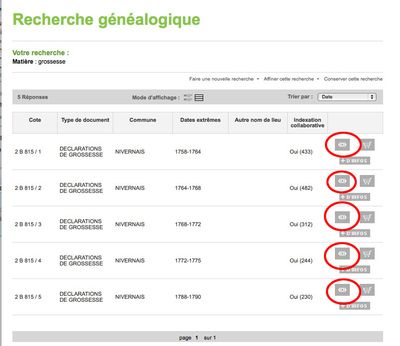 One could find a duller way to spend a rainy afternoon.