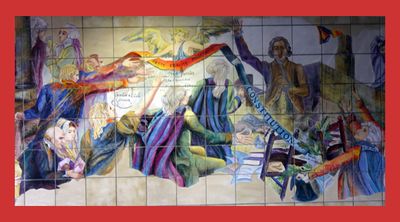 The day of national celebration of the birth of the Republic of France is upon us again. Known as the Fourteenth of July (Quatorze Juillet) in France and as Bastille Day to foreigners, it commemorates the beginning of the struggle to turn the government of France from an absolute monarchy to -- eventually -- a democracy.

The publicity wing of the military, L’établissement de Communication et de Production Audiovisuelle de la Défense (ECPAD) has created a wonderful VIDEO that explains the history of the celebration of the day, complete with archive footage of parades down the Champs Elysées in Paris. It is a day of military pomp and display in the capital, to be sure.

There are, as the video above shows, hundreds of soldiers marching, some tanks rolling, some jets careening overhead. Every little town has its celebration as well, with evening fireworks and speeches by the mayor. In certain parts of France, there is also the tradition of erecting a tree-flagpole, nostalgically termed the plantation du mai ("planting the hawthorne", the ancient custom of the Maypole, co-opted in a somewhat baffling style by country politicos). This does not involve planting nor does it involve hawthorne, nor even a traditional Maypole of ribbons and dancing children.

In one village's celebration today, it involved a pine stripped of its branches and festooned with flags. 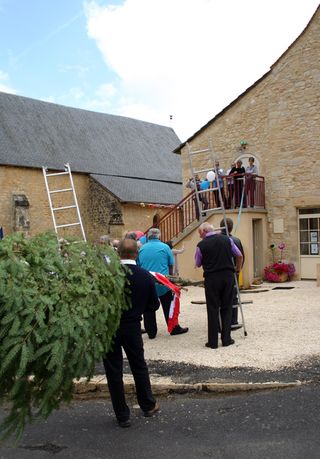 Which was secured to a railing by the village elders: 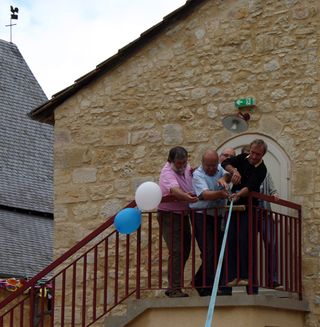 hoisted up with pulling and some very deft use of ladders: 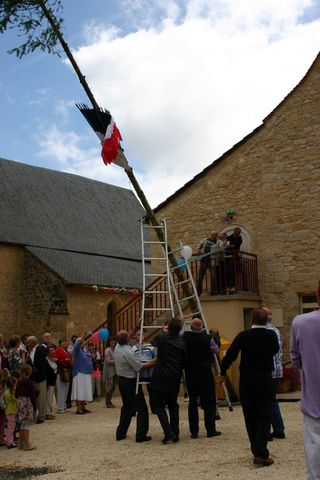 To stand proudly over the village square: 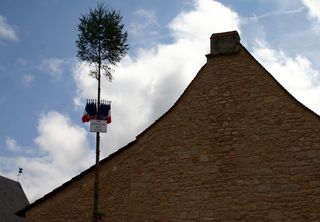 After which a good time was had by all: The sign on the tree reads "Honneur aux élus", literally, "Honour to elected officials" but a literal reading would be obtuse. The true meaning is to honour the electoral process, that is, democracy. Should you have an ancestor among the elected officials, you may begin to research them in a couple of places: 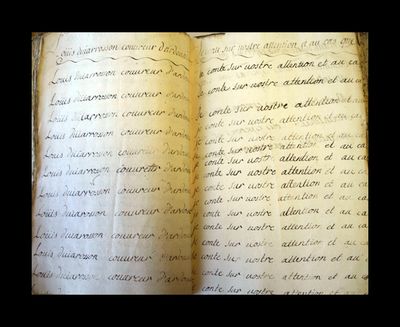 We are very much indebted to Monsieur D.C. for informing us about the wonderful website and free databases of  The Project for American and French Research on the Treasury of the French Language (The ARTFL Project) at the University of Chicago. Monsieur D.C. told us of the database, Dictionnaires d'autrefois, which allows one

To test it, we pulled out our battered list of words the definitions of which we have not been able to find in our modern French dictionary, nor in our grandmother's pink Petit Larousse Illustré, nor online. What a delight it was to find all of our mystery words defined via this single database.

Other databases available to the public at no charge include:

There are further databases which require access to the libraries and services of North American or French institutions which subscribe to the ARTFL Project:

But for the dictionaries, these databases may not further your genealogical research much, but they will certainly expand your knowledge of the thinking, culture and history of your French ancestors. Thank you very much Monsieur D.C.! 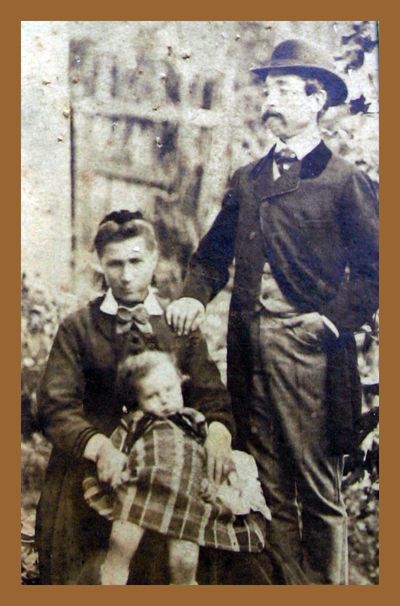 The popularity of genealogy in France continues to grow and, along with it, the rather new field of transgenerational psychotherapy or psychogénéalogie. A fairly well-known name among the practitioners is that of Christine Ulivucci, who has recently published a book entitled "Ces Photos Qui Nous Parlent : une Relecture de la Mémoire Familiale" ("Photos That Speak to Us : a Rereading of Family Memory" - click on the cover image in the column to the right to buy). She describes the book in an interview:

During the interview, a short film is shown of an example. Aurélie, aged thirty-seven, wanted to know if there may not have been some transgenerational reason as to why she had not yet found matrimonial bliss. A study of a few family photos revealed bad marriages on both the paternal and maternal side. No further along the road to marriage, Aurélie at least had found an explanation as to why.

Dear Readers, beware of adding this type of analysis of minimal amounts of data to your family histories! Were this sort of conclusion to be subjected to the Genealogical Proof Standard, it would fall far short of the rigorous research and standards required. Photography long ago was expensive and used only for the most formal occasions. Later, only the rich could afford to take snapshots at every family event. Now, of course, everyone's computer and phone is flooded with digital images. Analyzing a family using hundreds of photos today might be possible, but we question very severely the validity of conclusions based on five or six formal, posed photos from a hundred years ago.

Had Aurélie wished to use that conclusion as a part of her family's genealogy, she would have  had to confirm the assumption of those bad marriages with further documentation. Barring the convenient discovery of a photo showing one spouse in the process of strangling the other, she would have had to find some sort of documentation, such as:

We jest in part but the point is no joke: in genealogy, assumptions based on limited and/or vague sources are unacceptable. This is not only because it would be sloppy work but because the bad results would be interminable: one weak assumption would lead to another and another, unendingly. We all know how easily it happens: a guess that a marriage was bad becomes and assumption, the a certainty. It then is perpetuated in print and on the Internet and further conclusions about people, based on that "certainly bad" marriage appear, until there is an entire family history that is pure fiction.

We wish Aurélie no harm, nor do we wish to disparage Madame Ulivucci's work, which surely has its value when used correctly, but we do wish to warn against the invention of a life's "truths" based on limited sources.

Posted at 14:06 in Book and Magazine Reviews, Radio and Television | Permalink | Comments (0)