Was Your Ancestor a Compagnon du Tour de France? 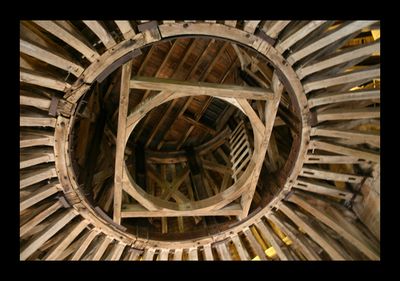 We have a really beautiful shell of an old house that we have been trying to flog for years.  It is in a village of historic preservation, so its exterior charm, as with that of every other building in the village, cannot be altered without permission from the bureau that protects the nation's architectural heritage (though one can do whatever one likes with the interior). It cannot be altered but it must be maintained. Recently, a hail storm of impressive force assaulted the village and every single roof, including ours, suffered some damage. Roofers have waiting lists of two years. For our village, not just any roofer will do; it must be one who has the skills of the old days and knows the safety standards of the new. Ideally, he would be a Compagnon de France.

The Compagnons du Tour de France began to develop in the fifteenth century as an organization with  a singular structure. At that time, money was scare and life very insecure. Many masters had to let their apprentices and workers go; and many workers chose to abandon their contracts and leave their masters. Some, beginning with saddlers and cobblers, began to travel from town to town, seeking work, for years at a time. That, in itself was not so unusual, but this group created a system of aiding one another and building trust in their skills.

They created a network of inns where they lived and met to invest new Compagnons into the club. They aided members who could not work because of injury or illness; they had a sort of unemployment insurance amongst themselves. As a group they were able to insist on a decent wage for all, and they fought for decent working conditions. Getting carried away, as such groups do, they had rules, they had ceremonies and rituals, they had secret handshakes or the equivalent in order to recognize members, and they welcomed one another as fellow travellers. By the nineteenth century, they wore fancy ribbons and carried a distinctive cane.

They also tried to force masters of the trades to hire only Compagnons and even to chose which member to send to which master's workshop. In return, they guaranteed the masters that the Compagnons they employed would be honest and well-qualified. As can be imagined, they were not legal, often not tolerated and had trouble with the police.

The key element of the Compagnons du Tour de France that gave it an air of romance and differentiated it from other groups of workers was its Tour de France, the travelling from place to place, which they called their "Devoir" ("duty" or, in modern parlance, "homework"). The purpose was to work with different masters and to learn one's skill or métier very well. The travel was not done only on foot, but more often by riverboat; later it was done by train and now, obviously, by car or probably truck. The stages of the travel were roughly from thirty to forty kilometers apart. The cities that became centres for the Compagnons are Orléans, Blois, Tours, Angers, Nantes, La Rochelle, Bordeaux, Nîmes, Toulouse, Agen, Avignon, Marseilles, Lyon, Troyes and of course, Paris. Each profession in each city had a set of skills that had to be learned, tested and proved. The more one travelled, the better one's qualifications.

Examples of types of skills in the Compagnons du Tour de France, in addition to the saddlers and cobblers mentioned above are:

Finding an ancestor who was a Compagnon de France would depend on your good luck in discovering a cane in the attic and your ancestor having been in one of the professions above, or one very similar, as well as having lived in some of the cities mentioned. The Musée de Compagnonnage, in Tours, has a genealogy section on its website. The Centre de la mémoire des Compagnons du Devoir may answer certain queries. Court records of the early nineteenth century may reveal your ancestor via one of the many disputes between them at that time. Archives concerning police surveillance may also tell of your Compagnon ancestor, though, again, you would need also to know where he went on his travels.

The director of the Musée de Compagnonnage, Laurent Bastard, says, however, that the best source of information will be in your family's old documents, so check them very, very carefully. If you find you are descended from such a one, be proud, for it was and still is a qualification that commands enormous respect. 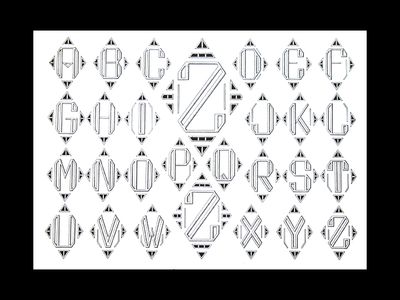 We have read that learning to look at a mass of things, to identify similarities and differences, to separate and group into categories the items that form the mass, is a process that is crucial to humans' being able to understand the world they perceive. We are not certain if our love of putting things in alphabetical order comes from our stint in library school or if that love is what directed our choice of that school in the first place, but we do like to make things tidy and comprehensible. We especially like making charts that bring reason and genealogical discoveries to the mass of information found in French civil registrations.

Each time we are working on a family, as soon as we start to find the civil registrations of births, marriages and deaths, we start a chart on which to enter all of the information. It can be made in Word, Excel, or any other programme that enables sorting on the rows and columns. The categories of information that can be found in the registrations and entered onto the chart include:

By constantly going over this information and analysing it as it is accumulated, a great deal more can be learned about the family and about where next to search.

Taking things further, we get a map and mark all of the addresses, with the years of occupation. We use a dictionary of métiers to see how professions are similar or connected. We get a time line of local history and note the dates and places of events on the map. There are many opportunities for eureka! moments of clarity and understanding of the lives being researched.

Too often, people think of the information from such registrations in terms of what can be entered into a genealogy database, via one programme's screen. Concerning French civil registrations, these programmes are inadequate and information can be habitually overlooked or set aside for the later that never comes. Thus, we still make our own chart, tailored to the family being studied, and use every single detail we possibly can.

Ah! The efficiency of the military! We have come to one of the five locations of French port and naval archives, which are a part of the Service Historique de la Défense, based in Vincennes, to the east of Paris. Each location is responsible for a specific collection:

These hold some of the best chances of finding certain crew lists, but those to the west, especially the archives at Lorient which took a direct hit, suffered enormous damage during the Allied invasion. Brest lost quite a lot too, but there is still much on offer.

That military efficiency means that these archives have plenty of staff, all of them well-informed as to the holdings and all quick to be of help. We were concentrating on crew lists and naval administrative correspondence and found every single thing we sought, making for a successful day, indeed. 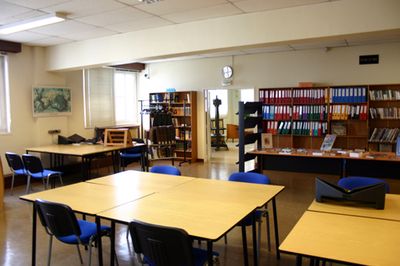 Before visiting one of the Marine archives facilities, do your homework. From the main SHD page, using the list of locations on the right of that page, or the links given above:

There, you will be able to read all of the finding aids to the archives at that location. Note down the codes and arrive at opening time ready to research.

(right on the water, with fairly decent restaurants nearby) 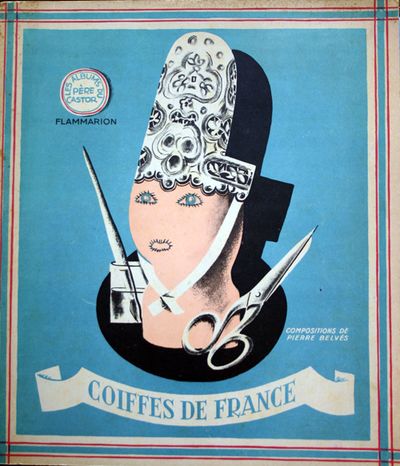 In the past, we have written on the subject of coiffes (see our jolly tome, which can now be purchased directly from Lulu) and how they may help you to find the region, if not the very village, of your ancestress. Should you be fortunate enough to have a coiffe among the treasures inherited from your ancestors, give it a close examination. Compare it with these dainty cut-outs for a match that could guide your research. 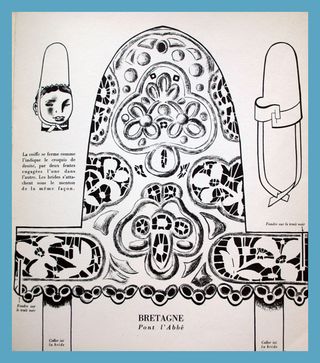 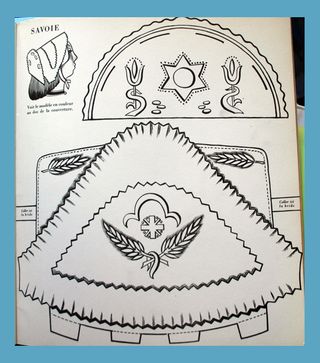 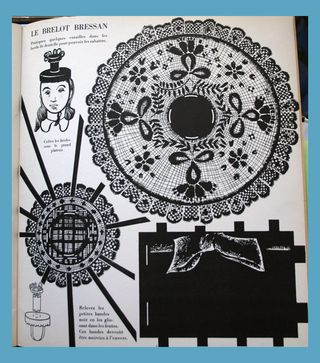 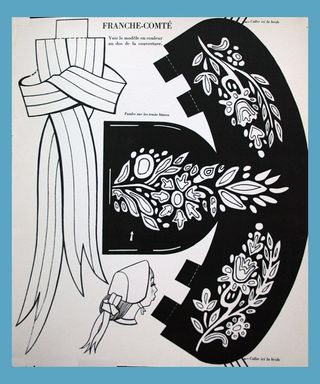 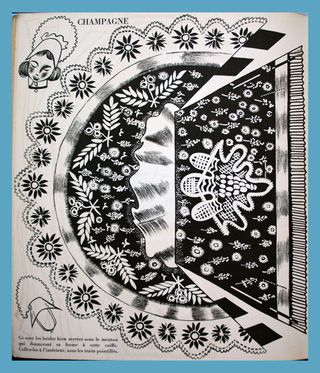 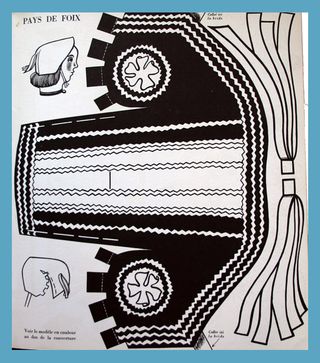 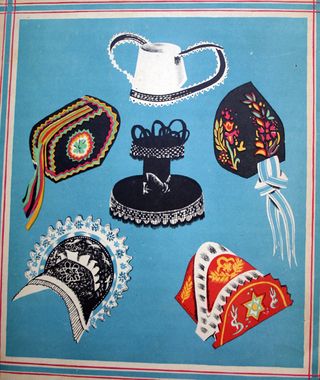 During our junket to Bretagne, we have taken a small break from genealogical research in the archives to admire the elegant exhibit of Breton dress -- including coiffes -- at the Musée Départemental Breton in Quimper. Though we are a dedicated devotée of Worth, we must admit that some of these are very pretty indeed.

Monsieur B. is one of our most loyal and generous of Readers and we are indebted to him for telling us of this National Geographic Magazine article on the coiffes of Bretagne. With the ever beautiful photographs for which that magazine is so noted, shown are women wearing Breton coiffes, the captions identifying the very village with which each style is associated. Maybe one will be that of your ancestress! Merci Monsieur B.

Rainy Day Activity Time : Failing a positive identification, you might use the above cut-outs to ensnare a little one for the cause of French Genealogy.

The Oddly Combined Archives in Brest 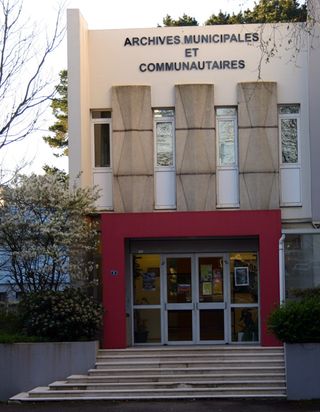 We continue our exploration of Brest's archives. Since so many of you, Dear Readers, have ancestors who hail from Bretagne, we are trying to make a thorough go of it and report it all.

The Municipal Archives of Brest have, as can be seen in the photo above,  an imposing entrance, but it leads to a rather sad demise in progress, while the replacement pants in the offing. You know those tales of the married invalid, incurable and wasting away, while the nurse who tends is bursting with health and vigor and cannot wait for the invalid to die so that the usurpation can begin. 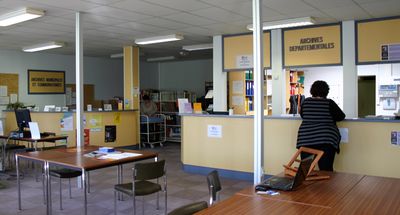 The Municipal Archives of Brest share their space with a branch of the Departmental Archives of Finistère. The former are a wan and forlorn affair. Because the parish and civil registrations of the Municipal Archives are online, along with the city General Council's Deliberations registers, and because the city archives do not hold much more than what is online, only a few old newspapers on microfilm and a clippings file on local notables, no one uses these archives anymore. The poor archivist, so keen to help, had no customers and absolutely nothing to do. Each time a person went to the desk, she looked up hopefully, but no one ever spoke to her.

To whom did they speak? To the archivist of the branch Departmental Archives of Finistère. All of the users in the room were there to use the Departmental Archives and the archivist, a starched and ironed bandanna covering her curls, bounded to be of assistance. None of this requests will be handled every 30 minutes business as at the main archives in Quimper;  the very minute we made a request, this archivist dashed off to get the boxes. Her energy, her importance, her efficiency made for excellent service (we saw eleven boxes in under three hours, something of a record) but also made her colleague across the room -- to whom she never said a word -- wilt all the more. It seemed a matter of days before one would be out of a job and the domain would belong to the exultant other.

The value of the holdings at the Departmental Archives branch in Brest is the large amount of documentation from the nineteenth and twentieth centuries on prisoners. Brest and some surrounding coastal towns had prisoners from a number of sources:

Many were condemned to hard labour, many were tossed into Brest's fortress dungeons, and many are listed in the archives. 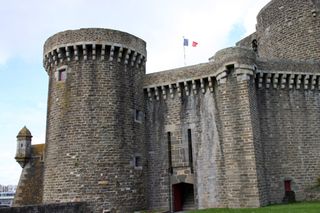