Further to our last on the Municipal Archives of Brive-la-Gaillarde, we report today on another treasure found therein: le certificat de bonne vie et moeurs, a certificate confirming that a person is of good morals and behaviour. This is, essentially, a character reference. Today, a document of the same title is issued in Belgium by the local administration where a person lives. In France, the modern equivalent is the extrait de casier judiciaire, the copy of one's criminal record or, what is to be preferred, the proof that one does not have a criminal record.

In the past, a potential employer or spouse or business partner would write to a previous employer and/or  to the mayor of the town where the person in question was born or lived. Quite a few mairies, (town halls), kept the requests they received for a certificat de bonne vie et moeurs and copies of their replies, along with those they received in response to their own requests. The Municipal Archives of Brive-la-Gaillarde have a small collection of these.

They vary greatly in the amount of genealogical information that they contain, but generally, a certificat de bonne vie et moeurs will give the following:

One written in 1848 for a university professor named Jean Victor Delbos is given below: 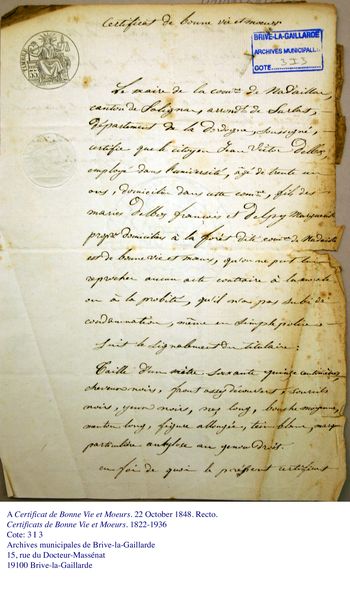 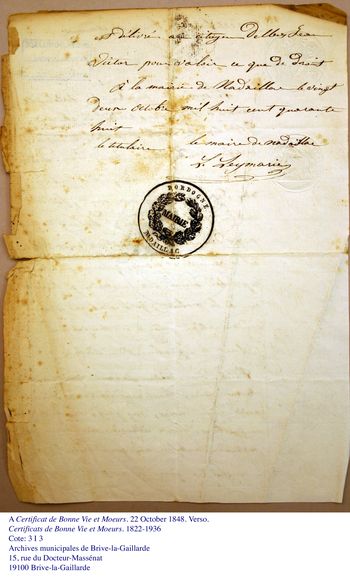 Should your ancestor have been a wastrel or worse, or merely on someone's wrong side, then prepare yourself for unpleasantness, for you may find a letter of refusal to give a certificat de bonne vie et moeurs with plenty of detail as to bad behaviour. We came across a pair of letters, written as late as 1936, in which a sad tale is told. The first was written by Josephine, a single mother of a toddler, who claimed to have been abandoned by her husband and who asked the mayor to write a certificat de bonne vie et moeurs to be sent to a person who had agreed to employ her. The reply came from the police inspector and stated that she was a divorcée; it also claimed that she had abandoned her child at her mother's house, that the mother complained about it constantly and that Josephine was of very low morals indeed. Neither gave any details of use to the genealogist researching the fallen Josephine.

Gossip? Back-scratching exchange of favours? A true account of a person's moral standing? Whatever relation to the truth such character references had, they are certainly interesting and may also be informative.

The Municipal Archives of Brive-la-Gaillarde 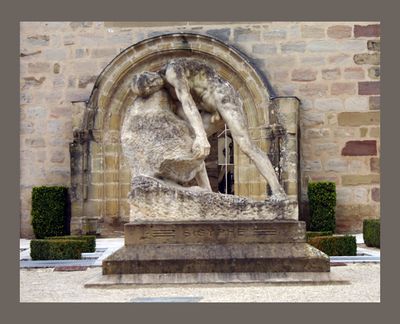 We have been on a little jaunt to Brive-la-Gaillarde, in the south west. We were keen to visit the Archives municipales which, though they have an excellent website (parish and civil registrations, post cards, etc.), have some rather interesting documents that are not yet digitized. As well, we seem to have given unintentionally bad press to municipal archives generally, for a few of you, Dear Readers, responded to our scathing post on the Archives municipales de La Rochelle, (a victim which fully deserved every drop of our venom), by asking us if all municipal or communal archives should be considered as a waste of time.

Not at all. As with everything in life, mediocrity predominates, but some are quite good and others not so.  It is not only money that makes a difference, but a city's or town's commitment to preservation of its historical documents. Some care; some cannot be bothered. Brive-la-Gaillard cares and, though small, has a comparatively big website, a good service, and an enigmatically placed sculpture out front (photo above).

The Reading Room is the tiniest we have yet seen, seating about eight people of average size and extremely good manners. The staff are very helpful and know their collection thoroughly. At least one of them also may have had training to a high level in dealing with clients suffering from senile dementia.

Some municipal archives, and this is such a case, have documents normally found in the Departmental Archives. They also have out of the ordinary collections of their own. At times, what they have is in better condition and more complete than can be found elsewhere.

Internal passports, for example, are difficult to find, and if found are usually in shreds. This is because they were given for a short period only, had to be shown often and were marked by every passing authority equipped with that bureaucrat's sword of honour, the rubber stamp. Brive-la-Gaillarde has not only some beautifully preserved internal passports but a very nice register as well. 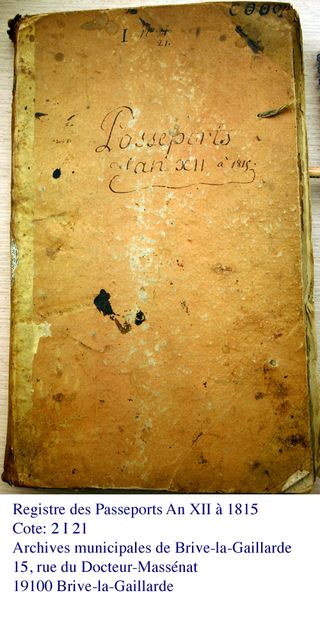 In the register can be found page after page of entries for the passports issued in Brive. The full name of the recipient is given, as is the physical description, age, place of birth and sometimes more. The example below turns out to be the record of an internal passport issued to the well-documented émigré from Limoges, Stephen Grellet. 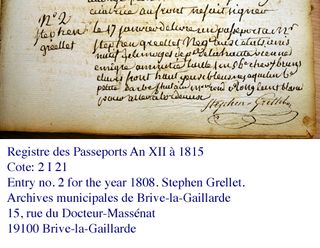 The folder containing internal passports is not large but contains, as noted, beauties. Below is the passport of a weaver, born in the department of Arriège, and who lived in Algiers. 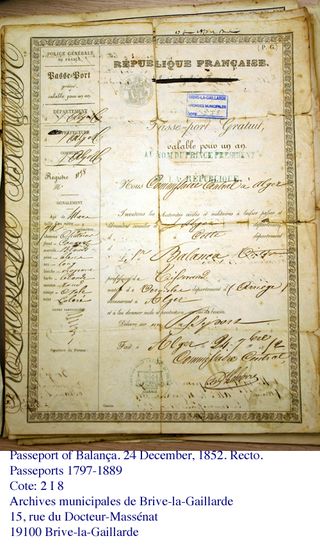 The real treat is on the back, showing all of the places he had travelled in France: 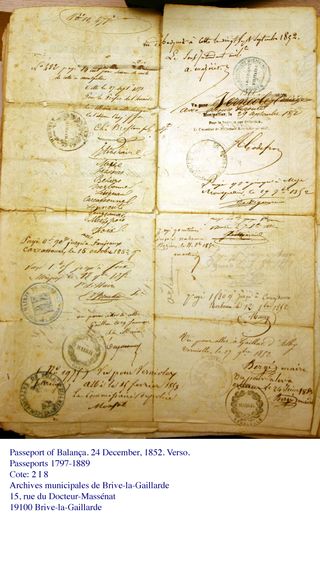 The majority of the internal passports in this file are for tinkers and others who wandered the country selling wares, colporteurs, a group of people who are often extremely difficult to trace in one's genealogy, yet here they are. Should you have such a one among your French ancestors, and have any idea of the general area where he or she travelled, you might wish to check the internal passports collections of the municipal archives of the region. If they are as good as the collection at Brive, you may find joy.

No annual closure, which is most unusual. 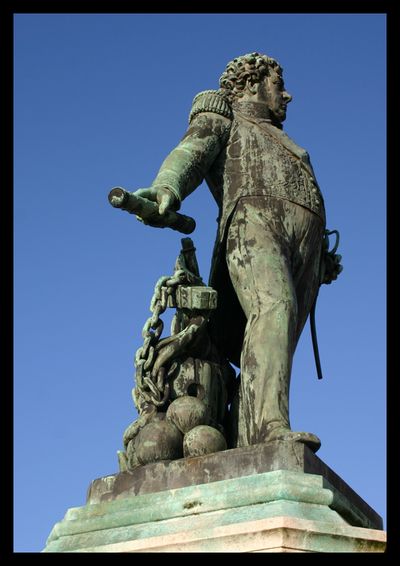 Many apologies for the lateness of this post. We were out gardening a few days ago and fell down a hole. The period of recuperation has brought us an interesting discovery: one of those websites created for love or obsession or both that freely share genealogical information in an intelligible format.

Just so with Claude Rossignol's Primo-Arrivants des Iles des Mascareignes, about the first European - almost exclusively about the French --  settlers in the Mascarene Islands. While we have written about the parish and civil registrations of La Réunion being accessible via the website of the Archives nationales d'outre-mer and those of Ile Maurice, or Mauritius, being accessible via the National Archives of that Republic, struggling between the two sites has been less than ideal for those who are researching ancestors whose families may have lived on both of the islands.

Monsieur Rossignol's site brings succor. While, naturally, it has links to the two national archives sites just mentioned, it also lists the names of all known first immigrants, with the details of their births, marriages and deaths, where known. It lists sources, and shows corrections to some of them. It has a long list of valued contributors. For each of the two main islands, there is an alphabetical list of immigrants. Perhaps of most value are the interactive maps which link back to these lists, especially that showing where in France the immigrants originated. If you cannot find your Mascareigne ancestor here, Monsieur Rossignol gives links to the sites of those who might help: fora, historical societies and genealogy associations of the region.

As is often the case with personal sites such as this, there is a bit of abandon with the use of Flash in the design, but we have seen worse -- showers of twinkling stars over a corps de ballet of dancing teddy bears and smirking fairies with innumerable flags stampeding round the borders. No, by comparison, Primo-Arrivants des Iles des Mascareignes's two scrolls of names may be annoying but are sedate. A fine site that will be of great help to a small but frustrated number, we imagine. 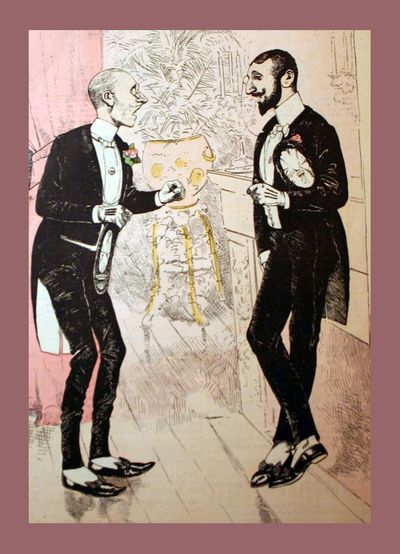 For those of you who were upset by a recent television advertisement for a soft drink, which was played during a broadcast of an annual, rumbustious, sporting match and which depicted scenes of life in America while a beloved song that is not the national anthem of that country was sung by charming young girls in a few different languages, we say: Ho! Try France! For centuries, France has been determined to suppress the other languages spoken in the land, some of which, as in the little case above, were spoken here long before the now dominant language. The superficial rationale was that everyone needed to be able to speak the country's official language; the reality has been that that was not enough: all other languages -- and their cultures and possible use as code in rebellion -- were to be obliterated. It is ever so that dull is the opposite of diversity.

France has forgone empire and is now part of Europe and the European Union deemed as long ago as 1992, with its Charter for Regional or Minority Languages, that said languages should be protected, permitted and preserved. France ignored it. There were repeated slaps on the governmental wrist. At long last, at the end of January, a draft law of compliance pushed by two Breton deputies in the French National Assembly was approved by a large majority. Those of the extreme right wing party voted against it; the Minister for Culture explained it to a cynical journalist who asked: "Why bother? Why not just teach English?"

There are seventy-five regional and minority languages on France's list and another fifty-four for the overseas departments and territories. Many are discussed here. Their new liberation can only be good for your genealogical research on your French ancestors, Dear Readers. If your family insists an ancestor were French but all the old letters seem to have been in German, you may now have an easier time finding and checking Alsacien or Francique dictionaries for the words used and thus narrow the geographical range where you would search. With more publicity, classes and teaching materials in these languages, you might even be able to study the Saintongeais or Cauchois that your ancestors spoke.

Now, we must wait to see if Orangina will find some bi-lingual children to sing the Marseillaise in 129 languages.