Find a Photograph of Your Ancestor 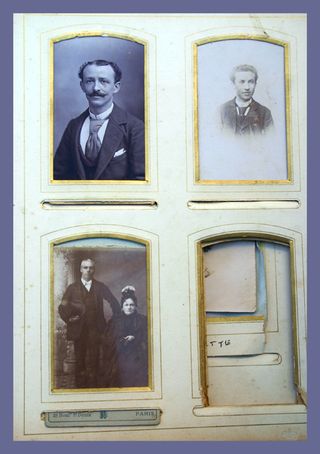 As the Departmental Archives put more of their collections on their websites, new delights emerge. Postcards of village squares and churches have been hitherto the only photographic fare. There is a church in every town and a nineteenth century photograph on a postcard of every single church, it seems. Looking at them all, one becomes aware of how terribly important each must have been to its community, as Proust wrote of:

"...the memory of those aspects of the steeple of Combray from the streets behind the church. Whether one saw it at five o'clock when going to call for letters at the post-office, some doors away from one, on the left, raising abruptly with its isolated peak the ridge of housetops; or whether, if one were looking in to ask of news of Mme Sazerat, one's eyes followed that ridge which had now become low again after the descent of its other slope, and one knew that it would be the second turning after the steeple; or again if, pressing further afield, one went to the station and saw it obliquely, showing in profile fresh angles and surfaces, like a solid body surprised at some unknown point in its revolution; or  if, seen from the banks of the Vivonne, the apse, crouched muscularly and heightened by the perspective, seemed to spring upwards with the effort which the steeple was making to hurl its spire-point into the heart of heaven -- it was always to the steeple that one must return, always the steeple that dominated everything else..."

Now, an interesting addition to the digitized images is that of photograph albums and photographers' archives. In some cases the photos are personal; in others, they may have been in an album created by an institution such as a hospital or school; in others an album was created to document a particular event of importance to the town; or there may have been a local photographer who snapped anything and everything and kept it all. For just a few examples:

There are many more. You will have to check the Archives for the department in which your ancestors lived. Then, it is a long slog through the photographs, for they are not indexed in most cases. Thus, you must look at the descriptive details for every photo of interest. However, you could get lucky and, as did Jérémie Bourillon, find your great-grandfather in a photo of a group of soldiers.

Let us know what you find! 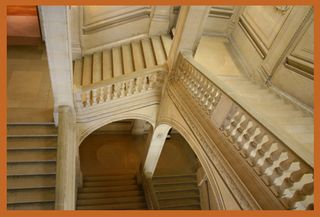 What with one thing and another, we have fallen a tad behind Dear Myrtle's MPG Study Group on Dr. Thomas Jones's "Mastering Genealogical Proof". They discussed Chapter Seven a couple of weeks ago and we come to it here only now.

In truth, there is little of urgency. Chapter Seven discusses how to write a Genealogical Proof Summary, giving formats so exquisitely precise and clear that one could almost call them templates. Many of those on Dear Myrtle's discussion panel and those listeners writing in their comments, as well as Dear Myrtle herself pointed out that this was not so much a lesson in genealogy or research but one in how to write clearly and communicate one's proof well. Naturally, the entire chapter also applies to a Genealogical Proof Summary using evidence taken from French sources; foreign sources are no excuse for logic and clarity to tumble by the wayside.

What we may be able to contribute by way of suggestion or assistance toward maintaining a pristine style when using French sources could come only from our own guide. We use two books, both by the inestimable Fowler (with his brother in one case and a modernising editor in another): "A Dictionary of Modern English Usage"1 and "The King's English"2. Generally, we follow him to the letter, though there are times when our native recalcitrance will send us on a little spree of stubborn adherence to a practice he disdains. His advice on French usage could be quite handy to those of you writing up a Genealogical Proof Summary based on dozens of actes d'état civil, recensements and French notarial records.

French Words: "Display of superior knowledge is as great a vulgarity as display of superior wealth -- greater indeed, inasmuch as knowledge should tend more definitely than wealth towards discretion and good manners. That is the guiding principle alike in the using and pronouncing of French words in English writing and talk. To use French words that your reader or hearer does not know or does not fully understand.....as if you were one of the select few to whom French is second nature when he is not one of those few (and it is ten thousand to one that neither you nor he will be) is inconsiderate and rude. (Dictionary, p. 212)

Every writer who suspects himself [of wanting to use many French words]...should...remember that acquisitiveness and indiscriminate display are pleasing to contemplate only in birds and savages and children.  (Dictionary, p. 212)

Foreign Words: The usual protest must be made, to be treated no doubt with the usual disregard. The difficulty is that French, Latin, and other words are now also English, though the fiction that they are not is still kept up by italics and (with French words) conscientious efforts at pronunciation....To say distrait instead of absent or absent-minded, bien entendu for of course, sans for without ... quand même for anyhow, penchant for liking or fancy, premier for first, coûte que coûte for at all costs.....is pretension and nothing else. (King's English, pp. 23-24)

But speaking broadly, what a writer effects by using these ornaments is to make us imagine him telling us he is a wise fellow and one that hath everything handsome about him, including a gentlemanly acquaintance with the French language.  (King's English, p. 24)

In short, do not assume that, because you are writing about your French ancestors, you must splatter their native vocabulary across your pages. If you are writing in English for English-speaking readers, then you must use French only where there is no English equivalent and when you do, especially with French genealogical sources, you would do well to define your terms. 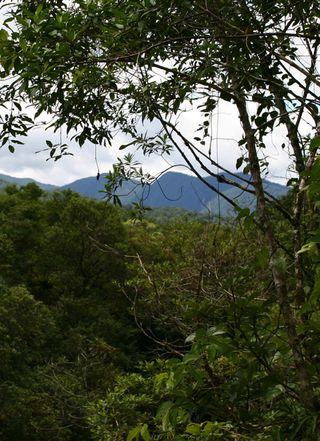 .
The wonderful website of the Archives nationales d'outre-mer continues to grow. Newly added are the parish and civil registrations of La Réunion, one of France's overseas departments.
.
La Réunion is just to the east of Madagascar. It has had a French presence of some sort since the early seventeenth century, though the parish registrations now online go back only as far as 1704, and up to 1907. These registrations will be of help not only to those whose ancestors went to La Réunion (or to the same place when it was known as île Bourbon or île Bonaparte) and married there or had children or died there.
.
They may also be of help to those connected to and trying to trace any of the Enfants de la Creuse, the Children of Creuse. These children were taken from their families and sent from La Réunion to France to repopulate rural departments during the 1960s to the 1980s. Many returned or at least found their families, but some remained in France and are struggling to reconnect with their families. Here are two accounts:
.

Perhaps, through the civil and parish registrations of La Réunion, many may find their roots and their families. We certainly hope so.

.
Increasingly, genealogists are extending their research into many types of documentation and archives, in order to be able to identify correctly the individuals they are tracing. Often, this research provides a wealth of evidence that can, sometimes indirectly, lead to significant discoveries. In French research, one of the best ways to trace an ancestor is by researching a family member who had no descendants. If you have a priest, a monk or a nun in your French family tree, then researching that person could well reveal much more about the family.
.
Archives & Cultures have published this year a very handy guide specifically on the subject of researching the genealogy of those who chose to dedicate their lives to the Catholic Church in France: Retracer le parcours d'un religieux by Jean-Paul Duquesnoy.
. 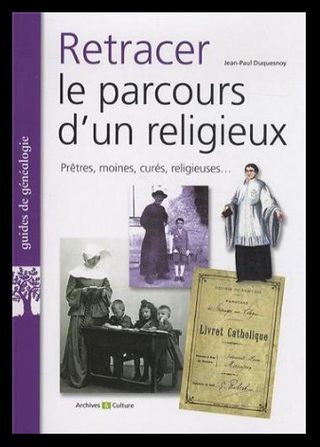 .
In general, we find it almost unthinkable that any book on French genealogy can improve on the 1981 classic Guide de recherches sur l'histoire des familles by Gildas Bernard, who was the Inspector General of the Archives of France. However, that laudable book's chapter on research in religious documentation is, shall we say, parsimonious and, to the non-French non-Catholic, mysterious. Retracer le parcours d'un religieux, on the other hand, is written for the utterly ignorant albeit reasonably intelligent modern researcher. Its sections are:
The book is only eighty pages and is profusely illustrated, which may make the price of ten euros seem a bit much, but we assure you, it is worth the price. Mr. Duquesnoy, a local historian of significant repute, has given us an excellent tool.