Carnival, Beignets and Your French Roots 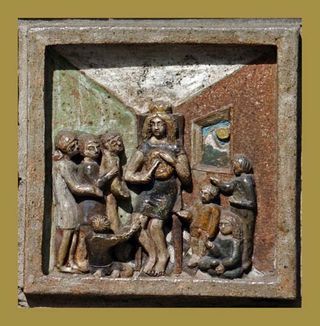 Carnival has been and gone. For those who are not familiar with this festival (well, there could be one or two) Carnival and/or Mardi Gras are celebrations that take place in the days before Ash Wednesday, which itself inaugurates Lent, which in turn is a period of forty days of privation and purification before Easter. Get out your Missals to understand the liturgical year of your French Catholic ancestors.

In the time of delirium there is dancing in the streets, sometimes in disguise or wearing masks, parties all around, even in dour France (we are reminded of a particularly harrowing Carnival scene in Agnès Varda's Vagabond) and -- pertinent here -- special, usually rich foods, even more usually (but not always), a form of fried dough, or beignet.

The names and recipes differ from one region to another in France, each a possibly precious memory from one's childhood, a memory that may have been taken well into later life in other places. Thus, if you have in your family a particular French recipe for something sweet -- probably fried -- eaten at Carnival or Mardi Gras time, it could indicate the province where your ancestor originated.

Now is the time of Lent, yet it has come to our attention that there is a moment coming up in advance of Easter when these delights may be eaten again. Your ever practical French ancestors celebrated a mi-Carême, literally, a Mid-Lent, which came exactly twenty days into Lent. Its source is an abhorrence of waste: fresh eggs lasted a maximum of twenty-one days. On mi-Carême, basket-loads beignets were whipped up and fried, served and eaten with - we presume - speed, to avoid the return of the toad.

What does your family call fried dough at Mardi Gras? Was there talk of toads in your food on Ash Wednesday? Get out those ancestral recipe books and look for one of the terms above. Maybe this will be the one little word that will tell you where your ancestors called home. 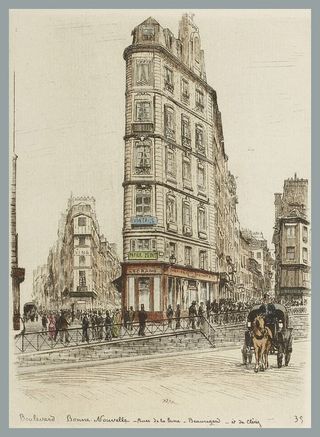 Genealogical research on those who lived in Paris can be tough. Recall the failure to do a census until 1926, for it would have been too difficult to manage, even after Haussmann eliminated many of the streets and shoved the poor out of the centre. It was also too difficult to establish a land registry for the City of Light until 1974. Recall that a fire during the Paris Commune destroyed the parish and civil registrations of the city's people up to 1860. For those seeking to find their Parisian ancestors, the hunt takes them to many peripheral document collections that have gained in value by reason of their containing some listing of names or details about people.

The Calepins du cadastre are a case in point. Properly, these are called matrice-rôles, or tax rolls, and the bureaucrats consider the more commonly used term of calepins du cadastre, meaning land registry notebooks, to be "abusive", though we think someone may be overreacting here. Looking for the middle road, it seems, the archivists at the Archives de Paris, where the calepins are held, refer to them as the Calepins des Propriétés bâties, and they are in the finance section under Contributions directes (codes D1P4 1 through 1237).

Genealogists, along with everyone else,  may dread the tax man of the present, but bless those of the past for their diligent record keeping on the lives of the citizenry. The calepins du cadastre of Paris were an effort to know how many properties were owned and lived in so that they could be taxed. Today, those living in France pay two property taxes: the taxe foncières which is a tax on all properties owned, and a taxe d'habitation, which is a tax on all properties one does or could use, including holiday homes, empty flats, etc. . The calepins reflect this thinking in the information gathered about the owner of the property and about those who inhabit it. 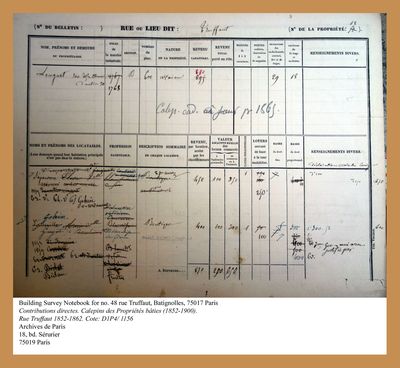 (click to see a larger version of the image)

The image above is of the first page of the notebook for no. 48 rue Truffaut, in the 17th arrondissement. The upper part of the page is for details about the property owner, in this case someone named Longuet, and his or her address, if elsewhere, as it is here, being rue de la Chaussée d'Antin, number 30. The section and plan numbers, the type of property (house), the taxable revenue, the total number of windows and doors for the ground, first and second floors (twenty-nine) and for the third floor and above (eighteen).

The lower part of the page is for details of those who live in the property  and there are no two ways about it, it is a mess. Most of the calepins are. People seem to have moved often. The notebooks were made in 1852 and updated or supplemented in 1862, 1876 and 1900. The many changes are reflected in the names lined out or added. The heads of the columns of this part ask for:

It is not a census. Family members are not listed. Age, race and nationality are not given. Still, it is just about the only way to see most of the people living in a building or on a street in Paris in the nineteenth century. 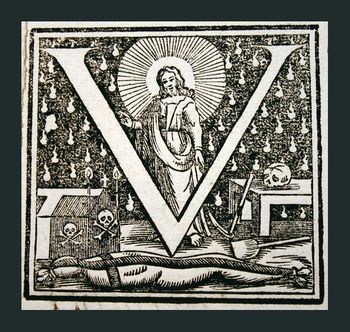 Since it is Saint Valentine's Day, we thought we would write about bereavement. (The commerce of publicly printing what is privately felt, you see.) Kindly recall that we have said that, during the second half of the nineteenth century, the fashionable death announcement was the faire-part, which has its origins in the placards of a century earlier. Placard currently means cupboard or closet in French, but it used to mean poster and it is in this sense that we use the term today. 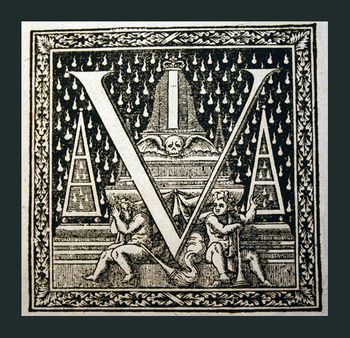 On the occasion of a somewhat prominent person's death, especially if that person were a bourgeois, his or her family often would have had printed a placard to post around town, inviting all and sundry, apparently, to the funeral. The placards were fairly formulaic in content and in illustration, as can be seen: 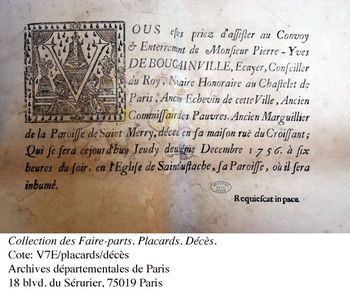 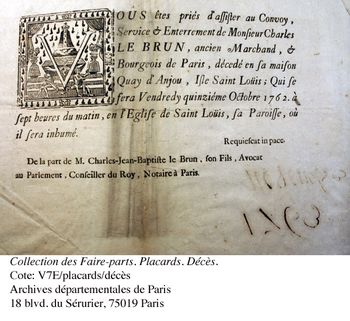 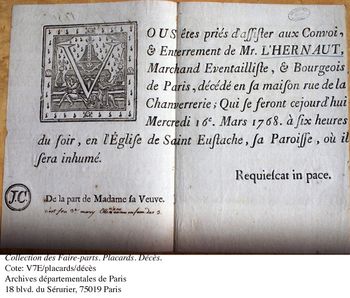 But they are also rather wonderful, we think, and it would be a delight for a family to have a picture of one that was printed for their ancestor, if possible.

The publications entitled Affiches, Annonces et Avis Divers obtained their information on burials, "enterremens", from affiches, (this being another word for placards or posters). Each week, someone went around town and took a copy of each poster announcing a funeral, or perhaps printers sent them directly to the publisher. In any case, the placards were the source for the enterremens listings. If, using the online service explained here, you find your ancestor in the Affiches, Annonces et Avis Divers for the city in which he or she died, you can then go to the relevant Departmental Archives and look for the placard. It is surprising just how many have survived, so you have a fair chance of finding it.

Should you be so lucky, it will nicely illustrate your French family genealogy, non?

The Morgue Registers of Paris 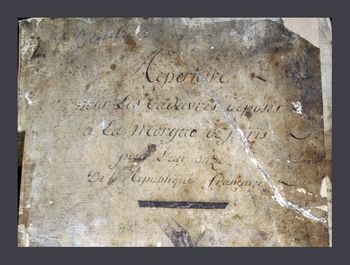 Two and a half years ago, we wrote about the Archives de la Préfecture de Police de Paris. Back then, the collection was excellent, but the space for researchers cramped, to say the very least. Better to say it was squashed, stuffy, a claustrophobe's nightmare. We are pleased to write that things are much improved.

We have been hunting Parisians who died in the early part of the nineteenth century. Because of "That Fire", death registrations for many were never "reconstituted", that is, no relative came forward with alternative documentation to prove when and where the person died in Paris. This was often the case with those deceased whose families did not know, or perhaps not care, or perhaps not want to remember.

If the person were noteworthy, some little blurb may have appeared in the papers, but it was not really the custom of the day. For the period we were researching, the papers were too busy reporting Napoleonic glories to bother with the deaths of Paris's ordinary folk. One alternative place to search is the register books of the Paris morgue, Les Repertoires des Cadavres déposés à La Morgue de Paris. We gathered up our notebooks and camera and hopped the Métro down to the police archives. How pleasant they have made the place: 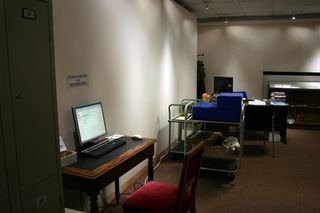 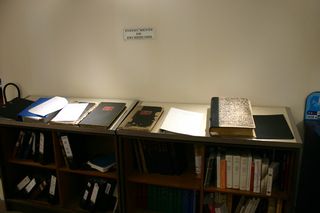 It is possible to breathe there, now. The staff seem much more relaxed and are even more helpful than they were before. There are now a few lockers and some very nice work tables. We settled down and - excess of politesse: indices and finding aids were brought to us where we sat! Excellent!

We were seeking a suicide, a man who jumped from a window in 1803. The registers for that year, and their duplicates, were available. He was not there, but plenty of other people were: Click on the above image to see a larger version

What is useful for the genealogist is that many -- about half -- of the bodies were identified. What is not useful is that there is no alphabetical index. The registers are merely chronological lists, so it would be wise to have a rough idea of when the death may have occurred.

These registers should be used as a last resort, for bodies were taken to the morgue only if they were:

Thus, you would want to search here if you suspect your ancestor were murdered or committed suicide in Paris. Should you find him or her in the registers, you will also find:

The morgue registers cover the years from 1798 to 1973 and are in sub-series LA . Opening times vary, so check the website and even ring to be sure they will be open on the day you wish to visit.

They are a fascinating read!