Did Your French Ancestor Attend the Ecole Navale? 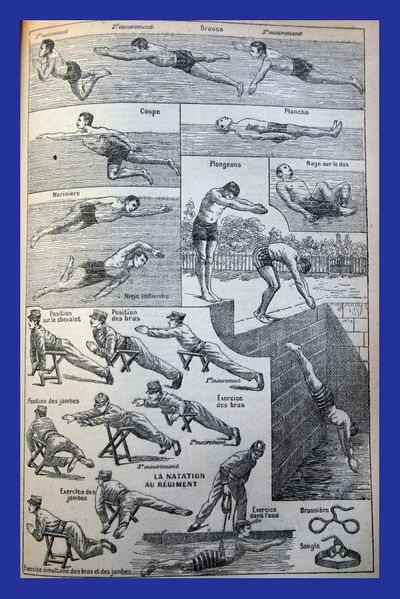 The Ecole Navale is the French Naval Academy. As with those of other nations, it is the training institution for naval officers. From 1830 until the Allied Bombing obliterated it, it was located at Brest and is now not very far away in Lanvéoc. Clever and well-connected boys, and now girls too, study all that is needed to know of things naval, from mathematics to naval aeronautics. It is probably a great loss, but we doubt that they still learn to swim perched on a camp stool, as above. In the tradition of the grandes écoles, they have a nickname - they are called bordaches - and, like all sailors everywhere, their own slang, which is called l'argot Baille, and into which we are far too circumspect to delve. If you suspect that your ancestor may have attended the school, it is now possible to search the names of many of the students online.

The Espace Tradition de l'Ecole Navale website is the baby of one, clearly dedicated, man, Jean-Christophe Rouxel. It is not bad at all. It contains among its pages a history of the academy and lots of well-presented illustrations and newspaper clippings. For the genealogist, the treat is the section entitled "Anciens élèves", or past students. Clicking on that brings you to a page with the alphabet at the top. Click on the letter of the surname you seek to get a list. 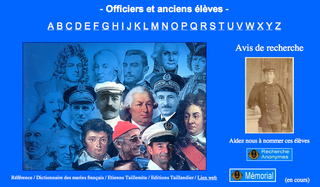 Most of the 7,200 names are taken from a published book, the Dictionnaire des marins français, as M. Rouxel freely admits. The rest come from the hard work and sharing of others passionate about the subject. The entries are, for the most part, impressive, giving:

Biographical dictionaries are expensive and exhaust the authors before their contents become truly exhaustive (we know because we are working on one ourself). This website, being free, is a treat for anyone with an amiral or even a lieutenant de vaisseau in the French family tree.

We received a query from Monsieur D. and felt that we did not answer it as fully as we might have done, so we decided to do some homework. Monsieur D. has some ancestors mentioned in d'Hozier and wanted to know more.

Pierre d'Hozier was a seventeenth century French genealogist and juge d'armes to the king. His job was to check on claims of nobility. His son, Charles, eventually took over the work and the position of juge d'armes. He created, at the request of Louis XIV, the Armorial général de France,  a list of all the coats of arms in use at the time. It includes not only personal arms, but those of cities, towns and associations. The king wanted to know not only that those who surrounded him were of the right sort, but the names of all of those who could be taxed as nobility.

All of the d'Hoziers' genealogy notes, and those of other royal genealogists, especially Bernard Chérin, (but also including the work of the fraud, Jean de Launay, who was put to death for selling fake arms and fake "proofs" of nobility) are in the Bibliothèque nationale. The entire collection is entitled the Cabinet des Titres. Along with the notes are many documents acquired as proofs:

The Cabinet des Titres forms a part of the French manuscripts collection (numbers 26485 through 33264), the catalogue of which lists all the manuscripts in detail (begin on page 102). The breakdown is:

There is an alphabetical index to all the family names mentioned in the six groups or series above, Répertoire alphabétique des séries généalogiques de l’ancien Cabinet des titres de la Bibliothèque nationale, in the library . The Pièces originales also have a chronological index up to 1514.

Additionally, there are the proofs of nobility, from the seventeenth and eighteenth centuries, for specific purposes:

Again, there are alphabetical indices to each of the above in the library.

Most of the Cabinet des Titres has been microfilmed and can be viewed at the Richelieu building.

Monsieur D., we hope this serves you better.

About once a week, we receive an e-mail requesting that we help with a knotty problem - the search for someone's living relative in France. Sometimes, it is a suspected father who is being sought; sometimes, it is half-brothers or half-sisters, or sometimes, just anyone alive and in the same family. We are always very sorry to disappoint, but we do not do that. However, here are a few avenues that may be of help, some of which we have described before:

If all else fails, we suggest you contact a private investigator, for only a person with a specific licence may research living people in France. 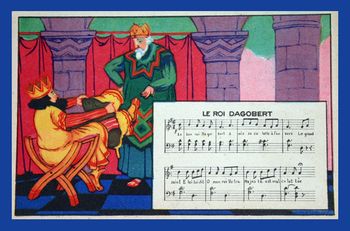 Increasingly, the websites of the various Departmental Archives are announcing the numérisation, or digitizing, and the putting on-line of their collections of cahiers de doléances. Time for us to explain just what these dandy little notebooks full of complaints are and what  fun they can be for the French genealogist.

In July of 1788, the king of France, Louis XVI, was on his way out but did not know it. He did have an inkling that something was causing discontent on an unprecedented scale and so, reluctantly, agreed to allow for a meeting of the Estates-General. (The First Estate was about ten thousand Catholic clergy; the Second Estate was about forty thousand of the nobility. These two had most of the land, money and jobs and paid no taxes. The Third Estate was everybody else; they paid taxes. Plus ça change...eh?) The last time there had been such a meeting was in 1614, which could go some way to explaining why French kings were so out of touch with their people.

In preparation for the meeting, the king had the bright idea of ordering the Three Estates to list their grievances. During March and April of 1789, this inept despot gave his people a voice. It was not the press and not any precursor of the internet, it was thousands of notebooks in which everyone, from priests to dukes, to merchants, to the odd literate peasant, could write what they thought was wrong with the country and its government. The king lost his nerve and unwisely cancelled the Meeting of the Three Estates; a bad move for now, everyone could read that everyone else was annoyed enough for a revolution.

Most of the cahiers de doléances survive. They were produced by every type of group or association, of which just a few were:

Many of these, along with related correspondence and documentation, are in the Archives nationales, in ninety cartons of the series BA.  Most others are in the Departmental Archives (see the list of links to the left of this page), again in series B, but also increasingly on-line.

From priests complaining that they wanted to be allowed to marry, to wayward nobles saying their families should not be allowed to banish them, to farmers complaining about the profits made on salt, the entries in the cahiers de doléances make fascinating reading. For the historian, they are a contemporary record from those whose voices were rarely heard. For the genealogist, they shed light on what is so often unobtainable: the thoughts of an ancestor.

There are a couple of avenues of research for your ancestor's possible complaint: in the cahiers de doléances of his place of residence, in those of his profession or métier, or of the Estate in which he found himself. Keep checking the website of the Departmental Archives, as they are constantly updating. Then brush up on your French and start reading!

On our arrival in Montreal, it had just snowed forty-five centimeters or so, the temperature immediately dropped to -18 and our brain stopped functioning. We whimpered and begged for chauffage. When things warmed up a tad, and it has been only a tad, we hoofed it out to Joliette to visit the impressive rooms of the Société généalogique canadienne-française. On numerous occasions, some of our Dear Readers have written to us about this fine association and its work, so we were pleased for the opportunity to learn more. 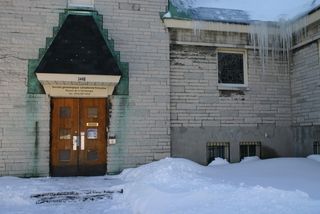 We found it in the basement of a church in a residential area of eastern Montreal. We were greeted warmly, charged ten dollars for the day, and were given a complete, thorough and exhaustive tour of the facilities. How our French Readers would envy such a fine collection!

There is a large library of published books relevant to Quebec genealogy, but it is the creations of the association and the specialised publications that are exceptional:

This is very good resource facility for those tracing French ancestors who came to the North American continent. We managed a bit of research and had a great evening afterward with some of the Society's kind members. Many thanks all around. 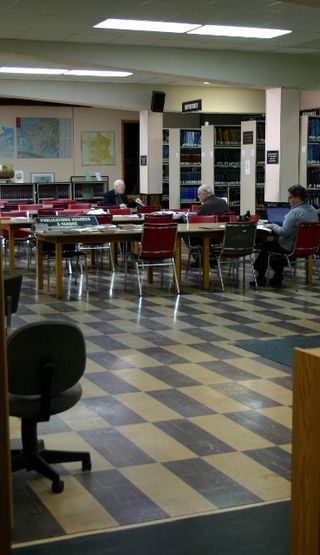 The French Genealogy Blog - A Restatement 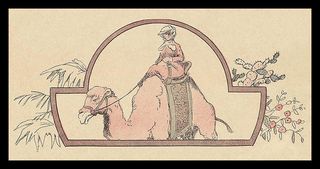 With a new year beginning, now would seem to be a good time for a restatement, we believe, of just what The French Genealogy Blog is. And of what it is not. We like to think of ourselves as something of the intrepid exploratrix of another era. We are discovering the -- in this case genealogical -- treasures of one culture and reporting on them to another. We are not always sure of just where our excursions will take us; we try to report only on what may be useful to our Dear Readers in their own research.

We are pleased and gratified to have now so many Readers, some of whom are also Subscribers (you can subscribe by entering your e-mail in the box for that purpose on the upper right of this page). We are extremely flattered by and interested in the many e-mails we receive from you, Dear Readers, though we often think that some of your stories and accounts would be of interest to other Readers, and we urge you to consider putting those, at least, in the "comments" section at the foot of each post.

However, we have also received some very peculiar e-mails and comments. These are not the usual scurrilous jibes, the spam, the robot-jabs, etc. that assault every such endeavor as ours (rather like a cloud of pestilential insects would have plagued our rôle model exploratrix of yesteryear). No, these are messages that contain or are based upon bafflement, befuddlement, and rank confusion. Thus our restatement.

During this coming year, we hope to accomplish many things here on The French Genealogy Blog, among them:

Then again, as a rereading of Candide is long overdue, we may spend more time with cabbages, the noxious things. As ever, we are honoured to receive your suggestions as to topics for posts.

Now, let us dauntlessly and with clarity sally forth into 2013 and see what we may see.