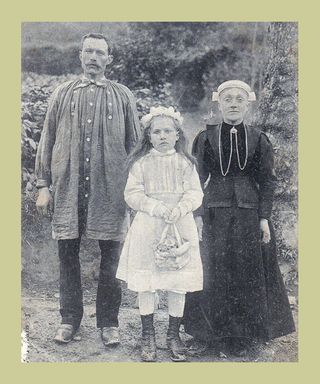 We confess that we have never done the DNA thing, mitochondrial or otherwise. We have never done it for our health, never had it done to us by the crime squad, never done it for genealogy. It is a lacuna in our experience, a failing of our courage. Somehow, we are squeamish at the thought of an anonymous lab tech knowing the deepest secrets of our inner workings, of our body's ancestral memory (how very Jungian) to a greater extent than we do ourself. Yet it would seem that exactly that will happen anyway, even if we are never tested but if some of our nearest and dearest start submitting their hair follicles for analysis.

Apparently, if enough relatives have their genes sequenced, our own sequence can be deduced without us ever going near a genetic testing company. We have learned, with an increasing gloominess, that utter strangers may pounce on us to announce that they know our sequence and it means that we must be related to them. What a nightmare! To paraphrase Brad Templeton, it seems that there are so many genetic testing companies with databases to connect people via their DNA, that such messages from ersatz cousins are, for some, almost spam.

The craze to have one's DNA sequenced in order to verify one's genealogy has not achieved the same intensity in France as it has done in the United States, but it is definitely on the increase. Unfortunately for them, this has been illegal in France since "the law of bioethics" was passed in 1994. Recall that we are in the region where people lived under the Nazi horrors and the thinking here is that genetic testing can edge mighty close to racial testing and the creation of a mass of data about citizens' racial backgrounds could lead to the same old trouble.

Nevertheless, those with short memories or dreams of the perfect genealogy have found a way around the law: as the test is usually via a kit sent in the post, it is easy to use a foreign company. (See this TF1 news clip.)  We give here the two companies most used by the French for any of you who wish to try this avenue to bump into one of yourFrench relatives alive today.

Good Reads - History of the French In India

We used to live on Avenue de La Bourdonnais and walk our children to school across the Champs de Mars and via Place Dupleix, streets named after two of the men -- La Bourdonnais and Dupleix -- whose little smudges on the history book pages stems from their activities in French India. We have written about Pondicherry here before, about its French graves, about its actes d'état civil, and about checking Compagnie des Indes passenger lists to find the name of one who was sent there.

A surprising number of our Dear Readers seem to have links with the tiny and beleaguered Pondicherry, France's colony in India. One of them, Madame W, kindly has pointed out a refernce work that contains a large number of names of French military personnel and settlers in French India, thus proving useful for a first stage of research. We have found it online at the Internet Archive and offer it here in the category in the panel to the left on this page, entitled "Good Reads".

"A History of the French in India" was written in the nineteenth century by a British colonel and historian. Hence, it is scholarly, emphasizes military history over social history, and is fraught with the usual prejudices held by Britain against France (no more numerous than those held by the French against the English) in that eternal extension of the Hundred Years War. Unfortunately, the copy offered contains the scribbled attempt at notes by some student or other of our alma mater. As usual with such inconsiderate people, they never read past the first couple of chapters, so the rest of the book is clean.

Of further interest to genealogists of  French Pondicherians may be the current photographic exhibition at the Alliance Française in Delhi, presented by the Alkazi Foundation for the Arts: "Mastering the Lens : Before and After Cartier Bresson in Pondicherry".  Alternative to booking passage to the vast subcontinent, a few of the photographs from the exhibition may be seen on the BBC News India website. Very nice. 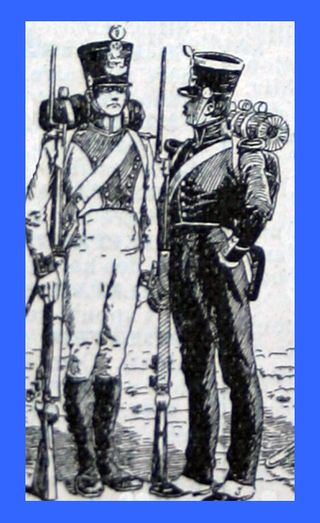 Carrying on from the last post, we tell here of a brief moment in French military history which may be of help to the genealogist. It came during the Restoration, when a soldier's legion could have indicated his department of origin.

The regiments of Napoleon's Imperial infantry were disbanded and reorganized, in 1815, into departmental legions, les légions départementales. Each of these new legions was required to recruit soldiers from the department for which it was named. At that time there were eighty-six departments, each of which was to have three battalions -- two of infantry of the line and one of light infantry -- making for a total of 258 battalions. It was not an easy task. Soldiers of the old regiments were largely loyal to Napoleon and many deserted rather than serve the royalty which perhaps seemed to them like an ever-returning, most unwelcome cockroach that can survive every attempt to exterminate it, even beheading.

There were imbalances and inequalities between the departmental legions since, of course, not all departments were equal. There were obvious inequalities in size, wealth, population and the numbers of those willing to volunteer. Yet there were many men required: a total of 1,687 soldiers and 103 officers for each legion.

Some would say it was impossible to enlist enough men because the Corsican had wiped out a generation of soldiers with his incessant wars and pursuit of personal glory. Others would say the reason was as given above, that soldiers and the people were loyal to him and refused to serve in the army of the reinstated king. Whatever the cause, the departmental legions had difficulty finding men. (One never managed to have more than 400.) Many began to recruit from their neighbouring departments, defeating the intention of the legions being composed solely of men from the departments of their name. Even with such neighbourly contributions, the legions could not be filled. Conscription was reinstated.

By 1819, the failure was recognized: it was impossible to have legions composed strictly and solely of men from a specific department. The law was changed in February of that year, allowing alterations to certain legions.  It was not enough. The following year the whole scheme of departmental legions was abandoned and the French Army returned to having numbered regiments.

You could be lucky and find that, between 1815 and 1820, your ancestor served in one of the departmental legions. If you did not know his place of origin at all before, you could make the reasonable -- but not at all certain -- guess that he was from the department of that legion, and thus narrow your area of research.

The Effacement of La Grande Armée 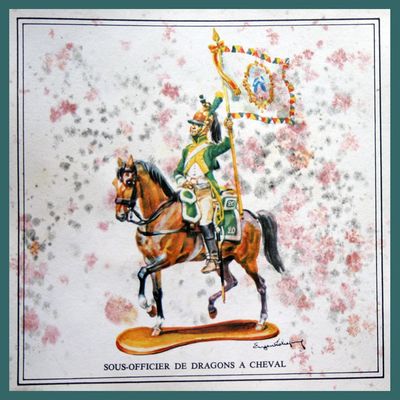 .
.
Tracing your French ancestor who served in the military during the nineteenth century can be a series of blunders of bafflement and confusion. This may be because the French army was rearranged a few times, with regiments being renamed again and again. We have written before of the regimental name changes from those of the Ancien Régime to those after the Revolution. There were more.
.
Not long after the Revolution, Napoleon came to power. Napoleon loved his army and often said he loved his soldiers. He planted trees for them. He gave them really dandy uniforms. He rode into battle with them and, on one infamous occasion, rode out again on his own and left them to die. Those who hated Napoleon also hated what he had done to the French Army.
.
After Napoleon's abdication on the twenty-second of June, 1815, one of the first tasks for the returning Bourbons was to eradicate every trace of the Corsican from the military; the Imperial Army was to become the Royal Army once again.  All of the regiments were dissolved, relocated and had that logical system of numbering removed. We give here the changes from the  Grande Armée names of regiments to the Restoration names:

Additionally, there were the:

What happened to the infantry was unique and will be described in the next post. 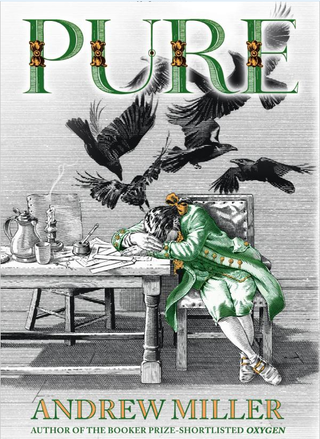 .
A bit of historical fiction to help spice up the hard slog of research can never go amiss. We have been spending many weeks researching a French family in eighteenth century Paris and elsewhere. We have been immersed in the world of the last two Louis, so it seemed in keeping with our work to read Pure, by Andrew Miller, for pleasure.
.
Pure tells of a Norman engineer in Paris, given the unsavoury job of closing an overfull cemetery and knocking down the church beside it. The Cimetière des Innocents has burst its seams with decomposing corpses in the open and the king has ordered it cleared. That much is historical fact. There is a story full of titillation: violence, a possible ghost, attempted murder, visits from Dr. Guillotin, suicide, rape, affectionate whores, and a big fire. That much is fiction.
.
Miller tells his tale with a charm of phrase that brings new imagery. There are sentences that make one stop and reread a few times, just for the loveliness of contrasting visions. His voice is modern but he conjures up the air -- in this case the stench -- of the French past just at the moment when its rotting society is about to burst with Revolution.
.
Good writing. Recommended.
.
©2012 Anne Morddel
French Genealogy