During a period of just one hundred years, from 1852 to 1953, France sent more than 100,000 convicts to overseas penal colonies, primarily to French Guiana and New Caledonia, Guyane française and Nouvelle Calédonie. Branded, beaten and in chains, men and women were loaded onto boats and sent away to sweltering climes. Their crimes were often poverty-related, and surely there were some who were purely evil, but many were political prisoners, or simply those who had fallen afoul of the powerful. If one of your French ancestors dropped out of sight during those one hundred years, he or she may have been sent abroad as a convict.

To enable our readers to learn more about grievous conditions in French penal institutions generally, we offer here, (with thanks to the Internet Archive) a link to the illustrated edition of Maurice Alhoy's 1845 book "Les Bagnes : Histoire, Types, Mœrs, Mystères", from which the image above is taken. The same site also offers a three-part interview by Criminocorpus with one Emile Demaret, who had been a guard at a colonial prison:

Part One : The prisoner "Canard"

Now the Archives nationales d'outre-mer (ANOM) in Aix-en-Provence, have made available online, not the convict files themselves (which have not been filmed or scanned), but the index to them on their online search system, IREL. Finding the database of bagnards from the main page is a headache. Its correct title is Base de Données des Dossiers Individuels de Condamnés au Bagne. Click on the link to go directly to the page from which one can search the index, by the prisoner's name and alias. We tried the alias "Bob" and among the results was one Robert Yung, condemned in 1862 and sent to French Guiana, where he died four years later. His matriculation number and the reference number are also given. With these, the next time one toodles to Aix, one may request Bob's file.

Genealogy often brings abandoned and lost souls to light. This is a nice addition to such recoveries. 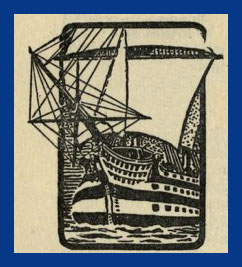 For quite a while, volunteer members of the Association des Amis du Service historique de la Défense à Lorient have been transcribing and indexing the records of the Compagnie des Indes. Lorient, being much dedicated to it, also has a superb Museum of the Compagnie des Indes. It is the online access to detailed records, however, that is so exciting.

The site is maintained by the Mémoire des Hommes, the same site that offers the online site of those who died in the First World War, Morts Pour la France. For the Compagnie des Indes, there are five pages, in French:

Documenting a Journey Across the Atlantic - From Both Sides 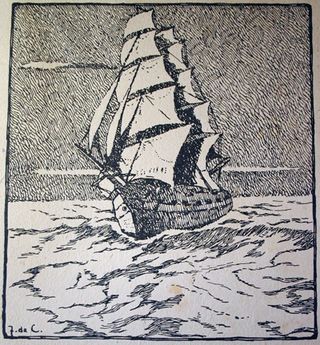 Our grandmother was something of an academic at heart and always taught us to "go to the source" when researching. The burgeoning plethora of databases and websites of scanned documents is making possible some very entertaining discoveries of sources, allowing for some dotting of genealogical is . We give here a detailed example.

We have been hunting a chap named Raymond Lafon, who arrived in New Orleans in 1839. We went first to Ancestry.com, where a broad search gave a man of that name, aged 28, arriving in 1820, which makes him too old for our man who should have been born in France in about 1817. It also brings up a Louisiana naturalisation record of 1852 for a Raymond Lafon/Lafond who arrived in June, 1839, probably our man, but no help as to his ship, passage, or port of departure.

He arrive on the 28th of May, 1839 on the Avenir from Bordeaux. Looking at the original record (ALWAYS advised) : 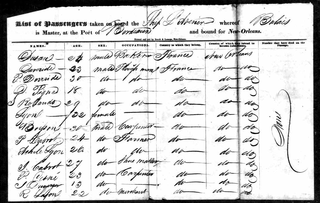 He appears last on the list and we get the added information that he is twenty-two years old and a merchant. Thank you, Ancestry. We have his time of arrival as May/June, 1839, the name of the ship as the Avenir and the port of departure as Bordeaux.

Turning to French resources, we find that the genealogy association, Amitiés Généalogiques Bordelaises, has made an index to all of the passports issued at the port of Bordeaux from 1793 to 1858. They no longer sell this index, and their site sends one to where it can be referenced online, the dreaded généalogie.com. Type "Lafon" in the search box, scroll down to "Passeports-Enregistrements-Embarquements" and click on the passports of 1793-1858, and there is the reference on the third page of results. Click on "visualisez" to see the information and you hit a mini-seam of precious metal, for it gives his:

One can do better yet. The Departmental Archives of Gironde have scanned and put online all of the passports covered by this index. On their page, click on "Archives en ligne". The passports in the column on the left are from 1800 to 1889. When we type in the search boxes just 1839 and Lafon, we get nothing. No idea why. So we revert to 1839 and get all 739 passports issued that year. With the "find" command of the keyboard, we search for Lafon, and there he is, number 72. Click on that to get the actual record, which does not confuse his residence with his profession and adds the information of his

We now know what our man looked like, what his work was and, most preciously in French genealogy, where he was from. We could then carry on to view the civil registrations for Sauternes, on the same website, and look for his birth. As to why he left that town, the name of which also graces one of the loveliest wines of France, no document will likely show. 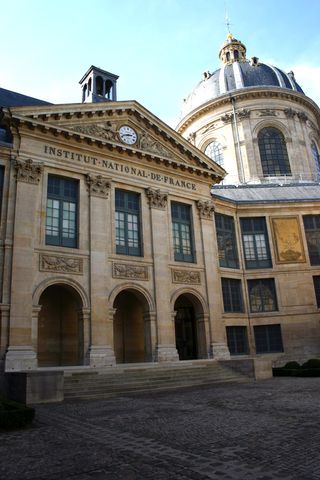 If your ancestor were an academic of some stature, an artist, a scientist, architect, philosopher, or some such, he or she may have been elected to the Institut de France. The Institute incorporates a number of academies:

Membership to these academies is for life and the numbers limited.  The Académie française, the French Academy, was established in 1635 before the idea of a population explosion was ever mooted, and has only forty places. Your ancestor may have been eligible but, if no member died soon enough to make a place available, not elected. Perhaps unfairly, a person may be a member of more than one of the academies, thus occupying more than one of the precious spaces.

We have been researching a member and had occasion to visit the archives and chat with the archivist of the Institute. We entered and sighed. No matter the massive, beautiful and historic building, no matter the prestige, the archives were in the same tumbledown neglect as in so many other places. Nevertheless, the archivist was most helpful and kindly pulled the membership file we sought. It was a fine trove of detail on the man's life and work, well worth the trip there.

To find a file on a member, write or e-mail the archivist with the full name and, if at all possible, the correct Academy and the date of election to it. He will verify if there is a file or not. Then, it is necessary to visit the archives to photograph the file, for photocopying and scanning are not permitted.

Paris Marriages in the 1860s 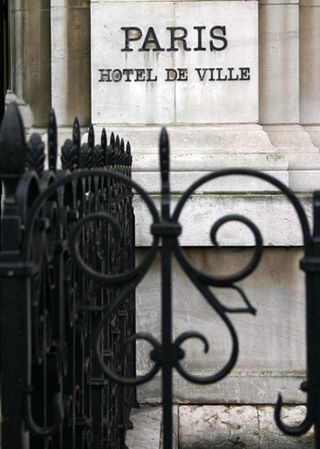 This is a small but very helpful resource. For nine years, the city of Paris published a weekly listing of all the marriages which took place at each of the arrondissement mairies, (the city halls of each of the borroughs of Paris). L'Indicateur de Mariages was published from December of 1861 through January of 1869. It gives a simple listing of the marriages, in order of the arrondissement numbers, with the names of the couple, their professions and their addresses. Each issue is usually four pages long. In 1868, it began to include the banlieus, the suburbs, and some notices from other cities, in a very small way. All 363 issues are available to view for free on Gallica. 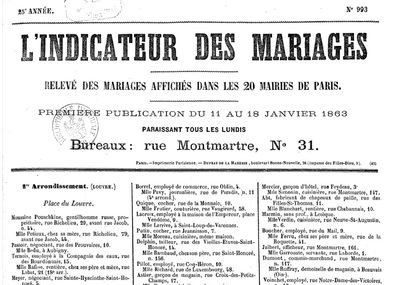 (Click on the image to see a larger version.)

In truth, there is nothing here that cannot be found by searching the tables décennales, the ten-year indices, on the website of the Archives de Paris (the link is also in the column to the left on this page). It is merely an easier presentation to read, which can be a relief at times.