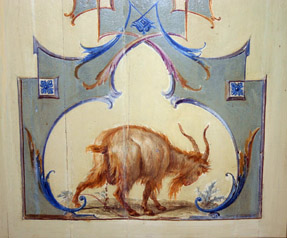 Different cultures have different ideas of privacy, and that applies to privacy, genealogy and the Internet, and to the area where all three intersect. In America, no one in genealogical circles seems at all concerned that heritage societies sell online the complete lineage of each member, including living individuals, even if the member protests, while in France there remains a concern, however token, about protecting the privacy of living individuals. How the latest developments will play out in practice is another story.

Currently, the news in French genealogy is the result of a meeting held on the 9th of December last at the Commission nationale de l'informatique et des libertés (CNIL) the motto of which reads in English as : "Information technology must respect human identity, human rights, privacy and freedom". The purpose of the meeting was to discuss the policy and directives on the publication, commercial or private, of images and information from the national and departmental archives, particularly for genealogy. This is an ongoing tussle which we discussed here last June and July.

The blog of the Fédération française de Généalogie (FFG) gives a summary of the decision and also gripes that the only representatives present were :

There were no representatives for professional genealogists or for private users or family genealogists. Thus, there is a building resentment about the seeming collaboration between government and commerce to keep the citizen/punter out of the decision-making process, which does seem do be a bit forgetful of the "human" in the motto above.

Many, especially Guillaume at FranceGenWeb, think this is a mess. La Revue française de généalogie, in an interview of Hervé Lemoine, director of the Service Interministériel des Archives de France (SIAF) by Guillaume de Morant emphasises the contradiction between the interpretations of the issues by CNIL and those by CADA, both organisations having authority of enforcement. Everyone wonders how the two rights: the right to access to information and the right to privacy, will be reconciled with any logical practical application. The Association of French Archivists with SIAF has organised a working group "Use of Public Data" and encourage involvement and public debate. They plan a conference day on the 11th of March, 2011. The European directive (last updated in 2003) on the subject is in the process of revision. When that is finalised, all member countries will have to revise their own policies to bring them into line with it.

Yet, the glory of the internet is that it crosses borders with fluidity. How will any plan be enforced internationally? Will genealogy multinationals experience in France episodes like Google's in China? We anticipate  fireworks at some point. 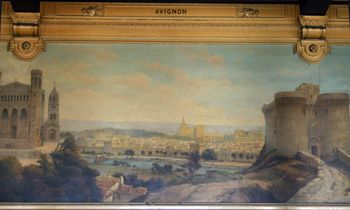 We have written before about the municipal and communal archives. They are going online at such a snapping pace that including them in a list of links would, we believe, require its own website and a full time employee dedicated to that subject alone. We considered it but, as Typepad is having trouble learning the alphabet, we decided against it.

By far, the best way to find if a particular city or village has their archives online is to simply google the town's name and archives communales or archives municipales. Additionally, the website of Archives de France maintains a list, though they are far behind. Généinfos, the blog of the magazine La Revue française de Généalogie, maintains a map that is quite up to date.

Given the fact that quite a few Departmental Archives (links to all are in the panel to the left on this page) still do not have parish and civil registrations online, it is worth while to keep checking to see if the commune you seek may not have put their own records up independently. 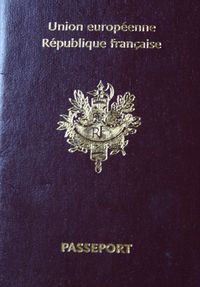 Passe-port is a French word, literally a pass to be used at a port. The Glorious Eleventh Edition's article on the subject opens archly with a discussion of  the passport, "or safe-conduct, in time of war, a document granted by a belligerent power to protect persons and property from the operation of hostilities." After a long discussion of safe-conduct for ships, the  author adds as a mere afterthought: "In its more familiar sense, a passport is a document authorizing a person to pass out of or into a country..."

Originally, beginning in the reign of Louis XIV, these were not little books as we know them now, but a single certificate for a limited period of time. Very few have survived being opened, shown, stamped, folded and put away again repeatedly. The more modern passport  in France began with the Décret du 10 vendémiaire An IV (the decree issued on the 2nd of October, 1795, in the Gregorian Calendar), with numerous updates in subsequent years. This changed the passport from being a safe-conduct that one requested to facilitate one's voyage to being a requirement enabling authorities to record one's movements.

The decree required not only passports for travel out of the country, but internal passports, passeports à l'intérieur, for travel outside of one's canton. (One type of passport existed prior to this, from 1724, was the requirement of vagabonds to have their own passport, a sort of homelessness permit.) Happily, the introduction of railway travel made the internal passport system impossible to maintain and it was abolished in 1862. Not so happily, it was to be replaced later by a document whose function is truer to the original intention: the identity card.

The internal and foreign travel passports were issued by different authorities in different places.

Physically, the French passport of the 19th century was a sheet of paper that separated into two parts along a curved line. One part was kept by the voyager and constituted the passport. The other part is in the national archives, in 656 cartons.

For genealogical research, those passport forms are not as useful in France as are perhaps the passport applications in North America. There are many gaps, primarily because a large percentage of them were thrown out in the 1890s by a gang of gleeful archivists. (It is rare, but it happens.) Most of the registers and indices were lost long ago. Those that remain refer in some cases to records that no longer exist. Over the years, some printed indices and lists of names have been created and are in book form. All of the passport forms are on microfilm.

Where to find passport records:

The information found may be well worth the hunt, for it will include:

All in all, not the best resource. 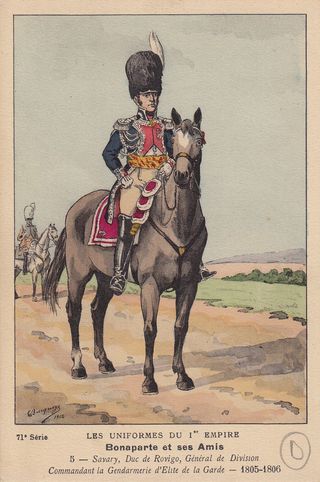 If your ancestor was in France as either a native or a foreigner during the First Empire (1804-1814) and did anything at all by way of travel, trade, crime or suicide, there is a good chance he or she was written up by the spies of the time. The French Empire of that time included Spain, Italy, Switzerland, Belgium, The Netherlands, and various German and Polish Duchies. Napoleon ruled it all and wanted to know all that was happening all the time in all of his empire.

The two Ministers of Police -- firstly Joseph Fouché, the Duke of Otranto and a wily dog; secondly General Savary, the Duke of Rovigo (the dashing fellow above) -- therefore sent him daily reports on all happenings of import (and not much) in the empire. The network of spies was enormous, and they reported back to police headquarters with whatever they thought might be of interest or use. They come across as obsessive and silly at times, but they have left a marvelous record: who received a passport, who left France, who was arrested, what little crimes were committed, political gossip, the evacuation of a church, the death of an English agent, the theft of a gun.

The bulletins are in the National Archives in hundreds of cartons. They are also all available online in two series of books entitled "La Police Secrète du Premier Empire". The first set, edited by Ernest d'Hauterive, is of five volumes, covers the Fouché years of 1804 to 1810. The second set, edited by the National Archives' expert on the First Empire, Nicole Gotteri, is of seven volumes and covers the Savary years from the second half of 1810 to March, 1814. Both sets have good indices, including names, but one must check each volume's index separately.

Most of the first set is online, in various locations, with the Internet Archive having all five volumes. Most of the second set is on Google Books, with a snippet view, which is often enough. Many libraries have both sets. A good resource and a fun read. 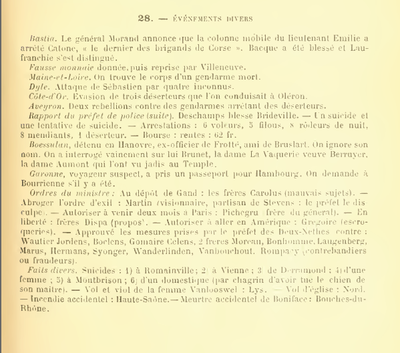 Hitherto, France's genealogists have been a secretive bunch. Each chambre (office or company) working steadily to build a massive collection of information, as in the Andriveau archives. The work was and still is competitive, the genealogist usually hired by a notaire to find heirs. When one chambre went under, the others fought to buy its precious archives. In addition to heir searching, traditional use of genealogists was centred around the discovery or creation of a noble pedigree with a collection of coats of arms. This was lucrative and much coveted work. Sharing information, openness about sources and research, cooperation, were all unknown concepts.

With the growing popularity of  a more simplified form of family genealogy -- a passion to discover the true place of oneself and one's family in history, as opposed to the need to find a relation for legal reasons or the need to justify one's existence through the aggrandisment of one's forebears -- professional genealogy in France is changing with the times.

The newly redesigned website of the USGP opens with a message from the president announcing a commitment to advancing the profession, increasing the public's awareness of professional genealogists, providing information to both professionals and the public and to openness and transparency.

There are some ninety-five companies as members. Approximately six hundred individuals are members, of whom four hundred and five hold professional qualifications. The statistics about cases handled is a good indication of the focus of the profession and of its fundamental function: about 5,000 cases per year concern family and historical genealogy, while more than twice the number of cases per year (12,000) concern the finding of heirs and establishing their rights.

The site has some information about the laws and access to records, but the USGP does not aim to help amateurs find their way; it aims to further the profession. To this end, it has created a page that is extremely useful to those seeking a professional: a directory of all members, l'annuaire. Here, one has a complete list of all registered members. Click on a name and a card image comes up giving the full name, business name and address, membership to one of the syndicats above, card number and date of first joining. Unfortunately, no telephone number or e-mail address is given; neither is there a link to the company website. Worse, there is no filter to allow a search by location, which is quite a bore.

Still and all, it is a good beginning. We are rather charmed by the naturalness of most of the photos.