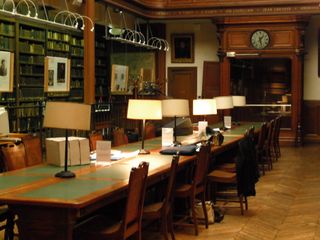 In a recent post, we recommended the site of the Société de l'Histoire du Protestantisme Français, but in our opinion, the superb library deserves a post of its own. Located on the border between the 6th and the 7th arrondissements in Paris, its door at the back of a courtyard, it is in no way obvious or obtrusive. It is so discreet one has the impression that persecution is still feared.

Within, is a collection unrivalled. Hundreds of books, manuscripts and journals make this the premier collection in the world on its subject. Tiny librarians in grey clothes and with grey hair guard the holdings which they know and understand brilliantly: they can bring forth ten books and manuscripts that answer a question before one has finished asking it.

Many of the manuscripts are of birth, marriage and death registers made and preserved by pastors. The originals may be in remote departmental archives, but researchers of rampant dedication have gone there and copied out the registers, bringing their manuscripts back to this library. They have also laboriously copied:

Probably the greatest coup, so far as genealogy is concerned, is that a pair of brothers named Haag copied out the registrations of many, many Protestants in the Hôtel de Ville of Paris, before it was burned.

Other treasures include archives donated from many Protestant churches, societies and centres. The Society has published, since 1977, the Cahiers du Centre de Généalogie Protestante, a quarterly of excellent, scholarly studies on Protestant families and groups. The library has all issues. It also has many of the publications of other Huguenot Societies around the world.

There is a fee to use the library, a mere pittance:

There are many holiday closings. Check the website or ring to be sure. 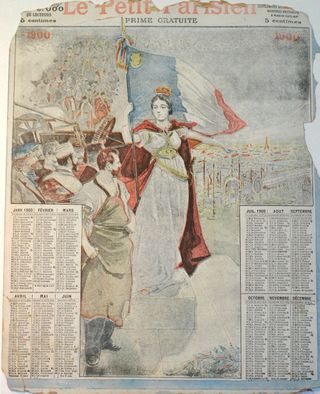 A reader recently asked why so many French ancestors seemed to a pick name out of a hat one day and just start using that instead of their birth names. We are quite keen on name freedom, as you may have gathered, and heartily cheer all peoples who retain the fluidity of names it seems all once had. Yet, there is more than liberty behind French names. There is the calendrier.

For generations, almanacs included a list of the days of the year, giving the holidays and for all the rest of the days, the saint associated with each. As almanacs became rarer, simple board calendars became popular, still with the saints' days. For years they were produced by the Postes et Télégraphes as a two-sided card. Magazines and newspapers also printed them as free inserts (like the one above.) They are still sold every year in papeteries (a sort of combined news agent and stationer's) all over France.

The calendrier worked two ways. If the birthday did not give a name, the name could give a birthday. Before the 20th century, people did not so often celebrate their birthdays as they did their name days. So, if a child were named Jules and his birthday in November, he would more likely have celebrated his "name day" -- 12 April, the day of Saint Jules -- than his birthday.  This had the bonus of namesakes celebrating together. Even now, every year on the 26th of July, I receive a phone call from Oncle Maurice in Orléans, wishing me a "Happy Saint Anne's Day". Some people celebrate both days, but this is considered excessive.

Just to add to the confusion, as years went by and saints changed in popularity, some were replaced on the calendars. The calendar above, from 1900 has the first of July as the day of Saint Eléanore. A calendar from 1918 has it as the day of Saint Martial, and a calendar of 1926 gives that day to Saint Thibaud. Generally, they are in agreement for most days, but there are occasional variations, keeping name fluidity a possibility.

We give here photos of the name days from the 1900 calendar above. Double click on them to see the full sized image.

Champagne Party at the Archives 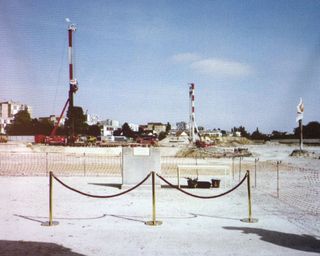 About three weeks ago, all patrons of the National Archives in the Marais received an invitation to a ceremony and champagne reception to celebrate the beginning of the construction of a new archives building, expected to open in 2013. (The photo above is of the site.) It will have lots of artworks by Pascal Convert and sculptures by Antony Gormley. The entry will be arranged by Susanna Fritscher.

Mme. Isabelle Neuschwander, the Directrice of the Archives nationales made a speech lauding this new building. The slameur (slam poet) Ami Karim, recited his poem giving thanks for this part of the national heritage being placed in his neighbourhood «Il en faut de la place pour garder le temps». He then recited four more poems to general applause. 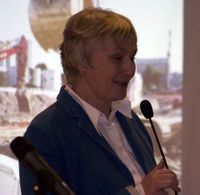 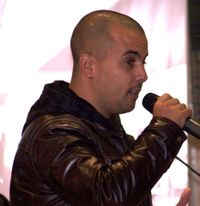 Are we pleased? Well, yes and no. It is the same old argument with these things, really. A new building is much needed, no doubt, for the French are keen recorders of detail and the national archives are mushrooming. Yet, this new building will be in Pierrefitte-sur-Seine, far outside the centre of Paris, making research much, much more difficult for students, professors, and us. All archives post-1790 will be sent to Pierrefitte.

Part of the archives collection has all ready been hived off to the site at Fontainebleau, well beyond the métro system. Another major part of the collection  -- that dealing with ex-colonies -- has been relocated to Aix-en-Provence, hundreds of kilometers away in the south. The diplomatic archives of the Ministry of Foreign Affairs  -- which used to be on the Quai d'Orsay in the centre of Paris -- have just opened in a new building in La Corneuve, again in the remote suburbs. While we sympathize with the need for more space and modern facilities, we deplore the scattering of the archives around the country, especially as there is no loan system among them, and there is very little duplication of microfilms.


The champagne was much appreciated, but our feathers were not unruffled in the least. 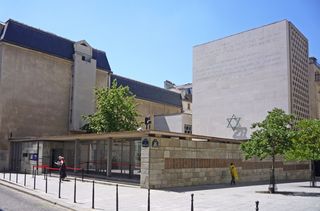 A few days ago, we received an e-mail from the noted expert in French genealogy, Earl F. Charvet, thanking us for the post about the Consistoire de Paris. He then went on to tell about research he had done at the Mémorial de la Shoah which is described as "the largest research centre on the history of the genocide of the Jews during the Second World War". We found what he wrote to be so powerful that we asked permission to put it up here on the blog. He very kindly not only assented, but sent the photo above.

I would like to add a mention about the archive at the Mémorial de la Shoah in the 4th arrondissement of Paris, just in case you have not worked there. In May, I spent a couple of days doing research in their library. Everyone on the staff was extremely helpful to me.

On this occasion, I was looking for any information about the 83-year-old French grandfather of an American living in Tucson. Upon entering the courtyard of the memorial, I immediately found his name etched into the walls among the 76,000 victims of the Holocaust from France so I knew more information would lie ahead. Within 90-minutes in the research library, I found that her grandfather first had been sent to the internment camp in Drancy (two miles south of today’s Roissy-Charles De Gaulle Airport), kept there several months, then loaded in a convoy (boxcar) a few days after the infamous « Rafle du Vel' d'Hiv » (Vel' d'Hiv Round-Up/Raid, 16-17 July 1942), and sent to Auschwitz.

I was stunned to find that unlike nearly all of the first French victims who were inhumanely shipped from Drancy - arriving dead at Auschwitz due to suffocation and lack of food or water in their convoys - her elderly grandfather had arrived there alive due to an unusual circumstance. Amazingly, the archive had microfilms of actual records showing him "checked-in" to Drancy, a list of everyone in the convoy in which he was transported, and most surprisingly, the German receiving records from Auschwitz that recorded his arrival. Other records showed he had died in the gas chambers only days later.

Beyond this soul shaking evidence, the library has a massive collection of digitized photos of the Nazi occupation of France searchable on their computers. I was particularly interested in photos of Drancy, and found hundreds. Scores of propaganda pictures by Nazi photographers of supposed daily life showed a shockingly twisted normalcy. The victims were caged inside of a barbed wire complex of ultra-modern apartment buildings and towers, originally part of a development called « Les Muettes » suggesting “quiet places,” which had the horrifying double-meaning of “mute women,” the irony of which could not have been missed by anyone. I was riveted to my computer screen, looking at photos for hours on end. Archivists graciously printed a few photos that I found particularly relevant to my research which I took with me at the end of the day.

The strikingly modern Mémorial de la Shoah opened in January 2005. It has handsome, informative displays about ordinary life before and during the Nazi occupation, and about the Shoah on several floors that are worth a visit in-and-of-themselves for anyone. The bookstore contains all types of works for sale in several languages.

Another place for researchers...

After receiving Mr. Charvet's message, we decided to visit the Mémorial de la Shoah and to look at the databases. The research room and library are on the fourth floor and are free to use. In addition to the collection of photos Mr. Charvet mentions, one can search on separate data bases:

Where possible, for every person, as much information is given and may include:

We are most grateful for this contribution. Thank you, Mr. Charvet.

The Archives of the Consistoire de Paris 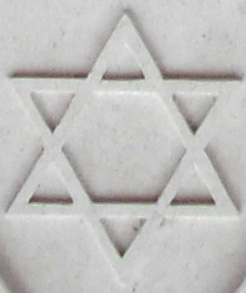 In researching Jewish families of Paris, the Consistoire de Paris provides a unique resource.  Before going, one should have all possible états civils and other documentation about births, marriages and deaths. This will greatly aid in using the archives of the Consistoire. The holdings include: 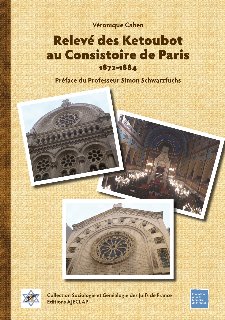 The Consistoire is located in the 9th arrondissement in a building with high security. To use the archives, one must telephone first and make an appointment. On arrival, one is escorted to the reading room, where there are no archives, but the shelves contain 100 years of  L'Univers Isréalite (see a sample copy on the internet archive  here ) and of Archives Isréalites (see a sample copy on Wikimedia commons  here ). One must explain what is being researched and the appropriate volumes will be fetched from the nether regions and brought forth. The gentleman who does the fetching will also suggest other research possibilities. Photographs of the registers are permitted; photocopying is not. We had a very successful research day, finding the cemeteries where a number of the people we have been researching are buried. Afterward, we took many photos of the graves that still exist.

What We Love About French Genealogy

Seven Things That We Love About French Genealogy