The Actes d'Etat Civil - Finding Them

The actes d'état civil may be wonderfully informative, but one has to find them first. As always, the first step is not who but where. You must have the location of the birth or death or marriage to be able to start your search. With that, you can find the correct department (listed in order on the panel to the left).

Within the department, find next the commune. Within the commune, if the year of the event is not known, the creators of the actes d'état civil have come to the rescue with the tables annuelles and the tables décennales. At the end of every year, the registrar, or officier de l'état civil, is required to make a list of the names and dates of each of the categories of event: birth, death, marriage.  The list will be in alphabetical order, with a reference to the entry number. These are the tables annuelles.

Every ten years, since the états civils were begun, the registrar is required to list all names in each category, alphabetically (or at least grouped by letter and then chronologically), giving first name, last name and date.  These are the tables décennales, also referred to as the TD. An example of a TD for marriages is given here: 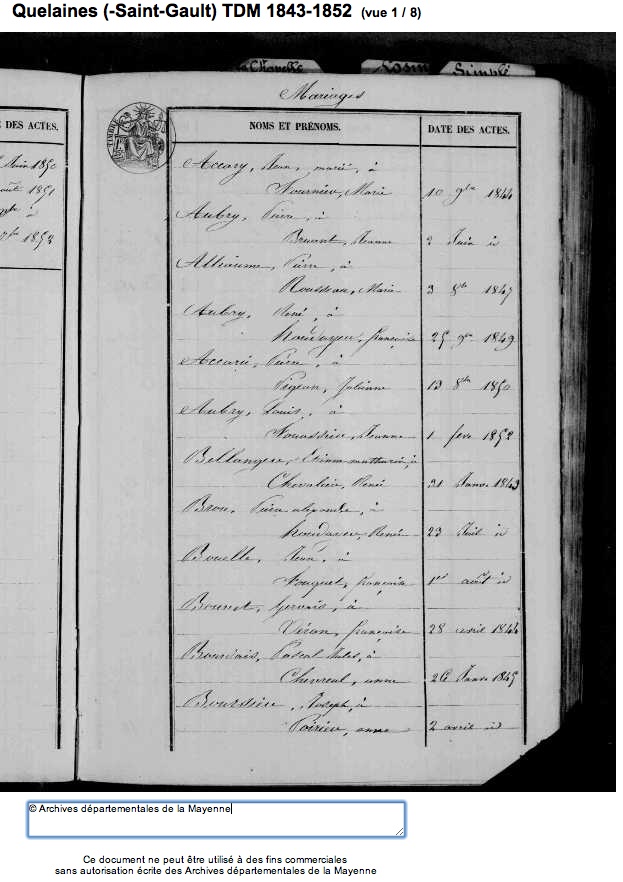 There are by law two locations where the actes d'état civil are kept: in the Archives départementales,  in series E, and in the Mairies (the Town Halls). In some localities, there are little disputes between the two and either one or the other will have the originals. Either will send a copy on request if the precise name, commune and date are given (research is not on offer). It is against the law to charge for a copy of an acte, but the person making the request must send a self-addressed, stamped envelope.

Increasingly, the Departmental Archives are putting their holdings online, to which access is almost always free. Some Mairies have online request forms. They will send an e-mail to say whether or not they have found the requested acte and if so, will ask for stamps to be sent. (However, some departments, such as Finistère, refuse to send copies, even when very precise information is given.) To find the Mairie's website, try  this very useful link, which is also in English, (click on the British flag)  for finding the addresses of the Mairies.

It is possible to request actes d'états civils online at: Actes d'état civil en ligne. This is a link to communes which will accept online requests but does not include the whole country.

When the actes d'état civil are available

The law of access is very strict, in order to protect the privacy of living individuals and their families. For consultation by the general public:

Just now, there is a great deal of complaining going on because the CNIL, the national body that concerns itself with computers, society, and privacy, has decided that the actes d'état civil that have been put online by the Archives Départmentales must be not 100 but 120 years old to be viewed. Researchers and genealogists are furious at this imposition by a body that does not have the authority, but there it stands.

It is possible to ask for three different types of reproduction of an acte d'état civil.

The government after the Revolution created the civil marriage, which did not exist in France before that. If the couple wishes to have also a church marriage (which, since the Revolution, is not obligatory), the law requires that the civil marriage take place first. As with the other actes d'état civil, copies of the acte de mariage must be placed with the Archives Départementales and with the Mairie (Town Hall).

As everywhere, marriage in France is a tricky business, involving a wide range of possibilities, such as contracts, banns, posthumous marriages, and more. However, the basic acte de mariage will contain:

Below are the two pages of an example of an ordinary, 19th century acte de mariage: 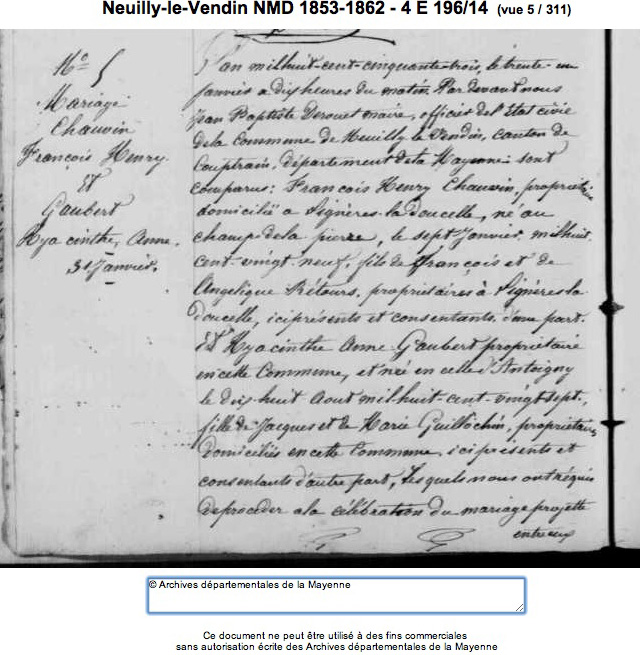 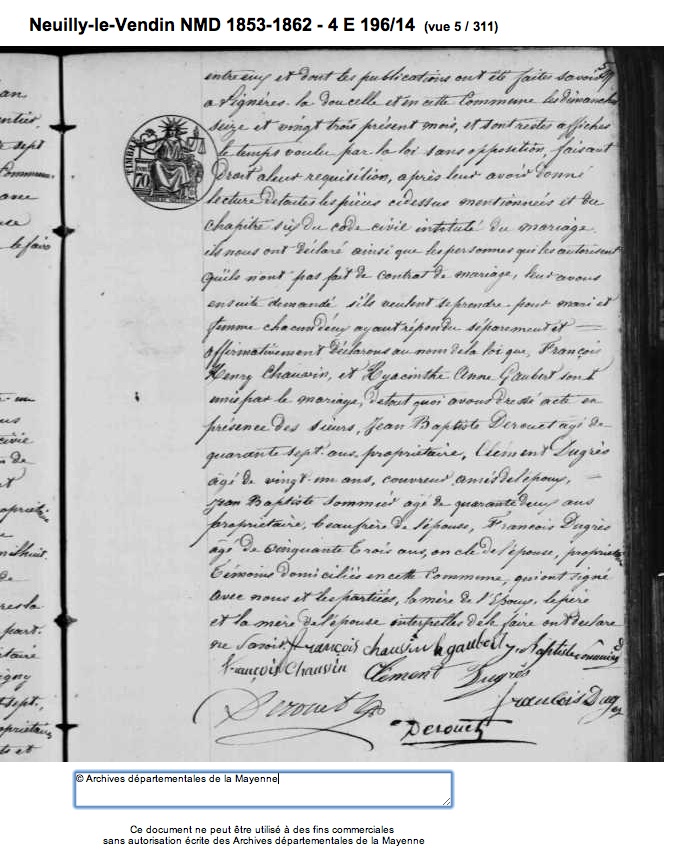 The images are courtesy of the Departmental archives of la Mayenne. 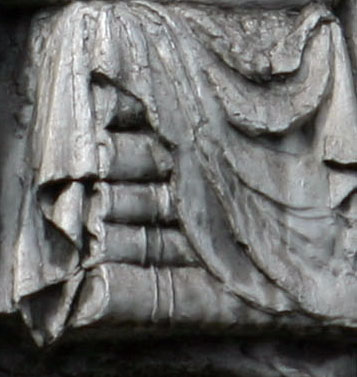 After the mayhem of the Revolution and in an effort to restore order and preservation, the Archives Départementales were created by the law of 5 brumaire an V (26 October, 1796, see the post of 17 July on the Republican calendar). Further to their organisation was the law of 28 pluvoise an VIII (17 February, 1800) and another law,  10 mai 1838 (by which time the calendar fun was over).

Like most countries in Europe and unlike the United States, France is not a federation of independent states, but a single republic with a central government. The départements are not states but administrative centres carrying out the laws of the country. The departmental archives in each department are all governed by the Archives de France. This is a blessing for the researcher, for it means that they all have the same indexing system for the same kinds of documentation, and they all have the same administrative structure. Thus, learn the system once and it can be applied throughout the country's archives.

The current classification system, the cadre de classement,  was created in 1841 and modified a bit in 1979. It is used to organise all the holdings of the departmental archives, whether administrative, legal deposits, or donations. The structural groupings are called series and are ordered alphabetically. We give the system in full here so that we will never have to do it again:

Series A - Acts of sovereign power and public domain

Series F - Various other archives having to do with civil administration

Series L - Administrations and tribunals during the Revolution (1790-1800)

Series Q - State-owned properties, both national and those seized during the Revolution

Series U - Justice and notarial archives

The Medium Destroys the Logic

The above series are all based on the subject of the archives, which are all stored on paper. Those below are based on the storage medium.

For the genealogical hunt, Series E (highlighted in a nice shade of pale lavender) is the starting point, for it contains the parish and civil registers, and the notarial records,  as well as the archives of titled families. Many, many other series may be useful, such as Series B if an ancestor went to court, Series U if an ancestor were a judge or lawyer,  Series T if an ancestor were a professor or teacher or school inspector.

Read all of our posts about Departmental Archives here.

With this installment, we conclude our offering of  a series of pithy little genealogy comments, in French, for radio, entitled "Mon Histoire, ma famille, La Minute-Info de la généalogie", produced by SEPREM.