Today's offering is "Le mode d'emploi d'un arbre généalogique" (How to use a family tree), a discussion with the historian and genealogist, Carène Rabilloud.
Download Arbre genealogique

Today's offering is "Quelques conseils pour démarrer votre généalogie" (Some suggestions on how to start your genealogy), a discussion with the historian and genealogist, Carène Rabilloud. 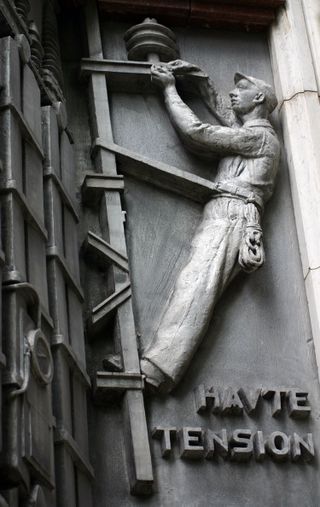 The production company, SEPREM, has produced a series of pithy little genealogy comments, in French, for radio, entitled "Mon Histoire, ma famille, La Minute-Info de la généalogie".  They contain a plug, but are still rather useful. We present them here over the next 15 days.

Today's offering is "L'engoument pour la généalogie" (Passion for Genealogy), a discussion with the psychoanalyst, Serge Hefez, on our deep need to research our ancestry. The French still love psychoanalysis.

Relax from the high stress life and listen to the radio for these few days this summer. This is a great way to build your french genealogy vocabulary. 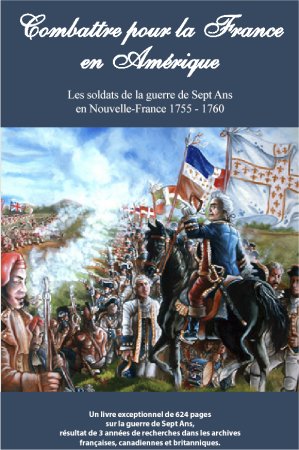 Friday, the 11th of September marks the launch of a phenomenal collaborative work :
Combattre pour la France en Amérique : les soldats de la guerre de Sept Ans en Nouvelle-France 1755-1760
(Fighting for France in America : the soldiers of the Seven Years War in New France, 1755-1760)
Known as le Projet Montcalm for the three years of painstaking research on both sides of the Atlantic, this tome has 624 pages of the details of every French soldier who fought for France in North America during the Seven Years War. At that time, Nouvelle-France included not only eastern Canada but Louisiana, Missouri, Arkansas, and much more. 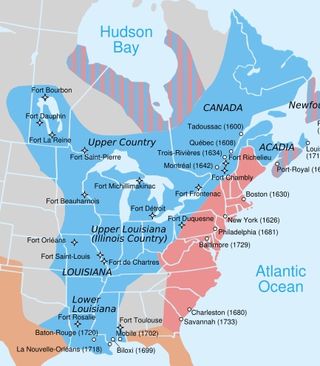 picture : wikipedia.com
Research on the more than 15,600 men -- officers and soldiers, recruits and volunteers --  was conducted in the Chateau de Vincennes, the Overseas Archives at Aix, the archives of Brest, Rochefort and Québec, the National Archives in London (for soldiers taken prisoner or exchanged), and the Huntingdon Library in San Mateo (where pertinent collections of correspondence are held). Both French and Canadian genealogists were involved. The book includes:
Nationalities of the men are not only French but German, Swiss and Belgian. Cities of departure include: Bordeaux, Brest, Dunkerque, La Rochelle, Port-Louis, Rochefort, Saint-Martin. Regiments include: Artois, Béam, Berry, Bourgogne, Cambis, Guyenne, and many more.  Below is a sample entry.

It says about Jean-Baptiste Campenon: "Soldier in the regiment of Guyenne, unknown company, 1759. He was born the 11th of August, 1733, in St.-Bris-le-Vineux, Yonne, son of Edmé Campenon and Françoise-Thérèse Quatremère. He was hospitalized at the Hôtel-Dieu in Montréal the 25th of January, 1760. He was in the Hôtel des Invalides in Paris on the 2nd of April, 1761. He died in Paris (at Invalides) the 24th of March, 1788. Notes: He left from Bordeaux for Canada where he arrived in 1759 on the ship l'Aimable-Manon. He was crippled in the right knee when a bomb exploded near him during the seige of Québec in 1759. He returned to France in October, 1760."

That is a tidy sum of information, with which one could take the research in France back a generation or two. Without question, if you have reason to believe that one of your ancestors was among these soldiers, you want access to this book. It does not, however, come cheap, so you may want to press your library to buy it.
To order in North America, contact:
La Société généalogique canadienne-française
3440 Davidson
Montréal H1W 2Z5
Québec
CANADA
telephone: (514) 527 1010
fax: (514) 527 0265
website: www.sgcf.com
price of the book, with postage: $78.50

To order in France and Europe:
Les Éditions Archives et Culture
26 bis, rue Paul-Barruel
75015 Paris
FRANCE
telephone: (33) 01 48 28 59 29
website: www.genefede.org
price of the book, with postage : €58.00
Alternatively, you can download the order form below and send a cheque.
Download Order form 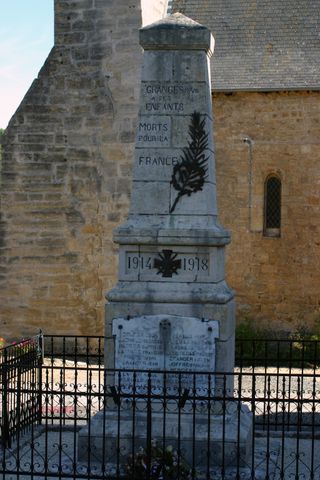 Those who died in battle or in any way fighting for France are grouped under the term "les morts pour la France". They are memorialized in many ways. Perhaps the most common and the saddest, is the monument in each and every village of the entire country showing the names of those who died in the First World War. The tiniest hamlet will have such a monument. It seems no village lost fewer than fifteen or twenty men. For those who died in the streets during the liberation, there are plaques memorializing them on the walls of buildings beside where they fell. In post offices, telegraph offices, libraries, anywhere where men worked, their names are listed. They are as powerful a memorial as the list of Civil War dead in the Memorial Hall at Harvard or the overwhelmingly sorrowful list of dead on the Vietnam Memorial in Washington D.C., and every corner of the land has one.

The names of all those who died have been gathered and are now available online as a part of the same Ministère de la Défense umbrella site. This part is called Mémoire des Hommes . In the panel to the left of that screen, under Périodes et Conflits, it is possible to click on each of the First World War, the Second World War, the War in Indochina, and the Wars in North Africa. 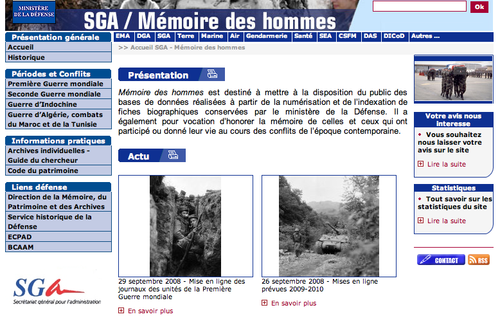 In the next screen, click Morts pour la France, and in the screen that comes up next, click formulaire de recherche. Type a name into the search box  -- we chose Tetrel -- and click Lancer la recherche. The results will resemble this:

On just the results list, you have the full name, date of birth, and department where born. Click on one of the names and the original form for transporting the body appears, giving more useful information: 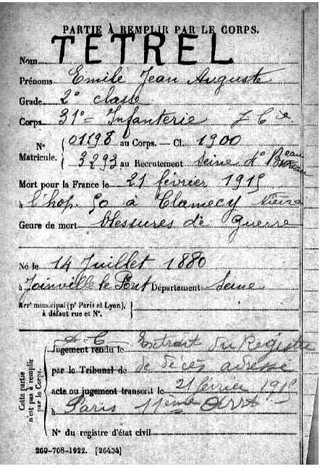 Going back to the initial screen for the First World War, there is another, smaller, collection entitled Personnels de l'aeronautique militaire, those involved with the first bombers. The resultant document has quite a bit more information than the previous one, including next of kin and pre-war employment: 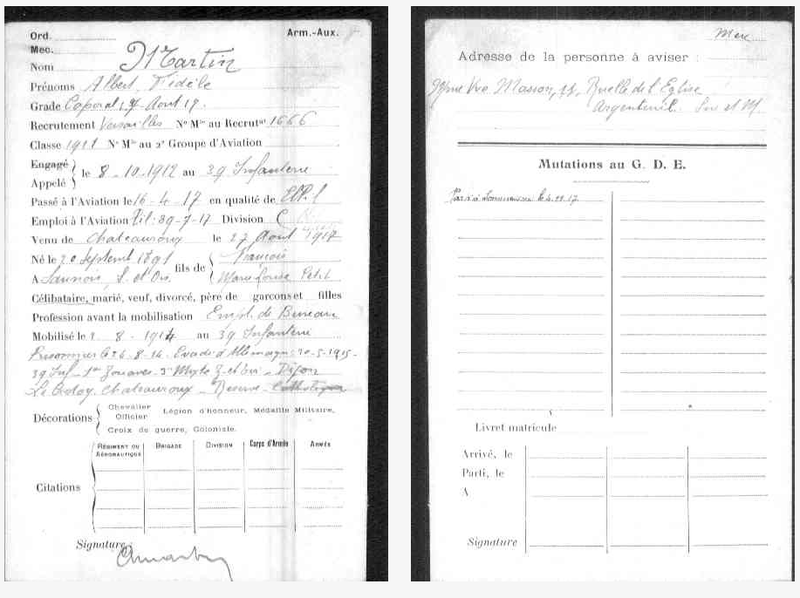 This is a growing resource, with the database for the Second World War only barely begun to be put online. Those for the Wars in North Africa and Indochina are complete. Do take time to explore this website. There are films, photos, television presentations etc. about France at War. 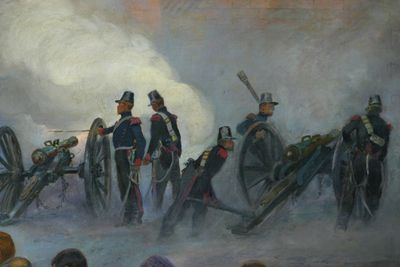 A better rule might be: "For officers, search in Paris, for the rank and file, search in the département." Essentially, knowing  dates and rank are even more important. This is because files may or may not have been kept for officers or soldiers and may be in different locations. Thus, to find the military records of a person in France, we recommend the genealogist answer these questions before starting out:

The primary division in French military records, as with all French historical documentation, is before the Revolution (referred to as Ancien Régime) and after the Revolution (moderne). It is true that, generally speaking, most records of the Ancien Régime, including military records (but not records concerning the colonies) are housed at the Archives nationales and that military records from 1792 are housed at the Centre Historique des Archives à Vincennes. Yet, all is qualified by the questions above, and here is why:

If, having done all of your homework, you determine that what you seek will be at Vincennes, here is how to go about it.

Still at home, you must reserve the files you wish, AT LEAST:
Reservations may be made by telephone, post, and e-mail. To reserve, one must have a reader's card number, or state that it will be the first visit. Reader's cards are issued, without charge, at the information office on presentation of a photo ID and the completion of a form.  At the same time, remember to reserve a place in the Reading Room, the Salle de Lecture, which is NOT air conditioned, but is, as you can see in the photo, rather charming. As at other archives, you must leave most of your things in a locker (which is free but requires a 1€ coin to be operated), putting your notebooks, pencil and camera in a plastic bag (which is provided) before entering the Reading Room.
The main website is the Service historique de la Défense. In the panel on the left of that screen, click on Archives individuelles - Guide du Chercheur to read the instructions. (Update March 2013 - the site was recently hacked and is not fully checked and back online. We have tried to update the links.) 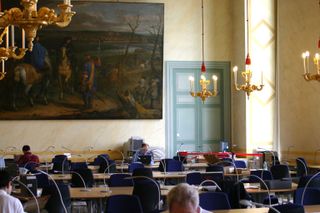 These are among the most complicated of archives that we know. Please do all of your preparation in advance to avoid disappointment and frustration.

Using the Legion of Honour for Genealogy

Napoleon created the Légion d'honneur in 1802 as one of the first post-Revolution awards for civil or military service to the Republic. It is extremely prestigious, even though it has been awarded to well over 100,000 people in its 200 years of existence. Soldiers, artists, authors and businessmen have received one of the three degrees of Chevalier, Officier or Commandant, and/or of the two dignities of Grand-officier or Grand-aigle.

The Fondation Napoléon gives a very good history of the Légion d'honneur in English.

The Grande Chancellerie de la Légion d'honneur is both the institute and museum, and the website has a virtual tour.

Our interest, however, is genealogical. Should you have any reason to suspect that one of your ancestors may have been a recipient of one of the medals, the list of recipients can be used to glean a bit of genealogical detail. The files on all recipients are held at the Archives nationales, and these are gradually being put on line. The index, with birth dates and birthplaces, is already up and can be searched. LEONORE is the name of the database of the Order of the Legion of Honour. It clearly states that not all files have been scanned yet, but do enter the site and type a surname into the box and see what comes up. The information on the index includes the full name, date of birth, place of birth, and the number of the dossier in the archives (should you be able to go there.)

It is a small, supplementary resource, but can yet be of use.

To know more about the museum and medals generally, here is a link to a post and internet radio presentation (in French) about Le musée de la Légion d'honneur by its conservator.