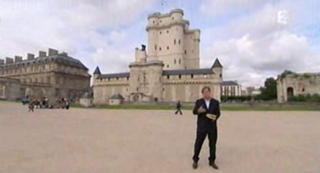 The television show, Complément d'enquête recently aired a show about the military archives at Chateau de Vincennes and what the somewhat overexcited journalist has called the "secret archives". These archives are from the Second World War and were bounced from France to Germany to Russia and back to France again. The entire presentation, in French, has some very nice views of the chateau's exterior, and some of the interior and the archives, can be seen on the France 2 website. The show is really about public interest in history, which is dramatically claimed to be increasing. There are a number of interviews with people whose lives are in part documented in the "secret archives".

Unfortunately, when you go to the URL, it takes you to the most recent show. To get to this one:

In the panel on the left, click on EMISSIONS

In the menu that opens, click on Complément d'enquête

Click on  the image for "Histoire, La Nouvelle Passion Pour Les Français" (It takes a while to load.)

The website, Genclic, which reports on genealogy in the media, has drastically edited the show, taking out all of the exterior shots,  and put it up on YouTube:

Soon, we will get over to Vincennes again and report on researching there.
©2009 Anne Morddel
French Genealogy 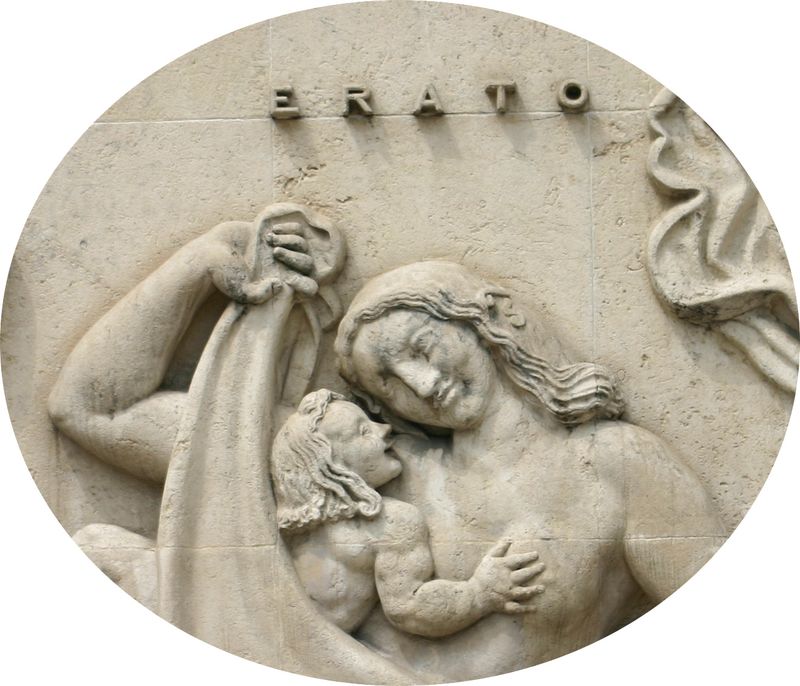 Historically, the French have been very strict about naming. It is permitted to change a name legally, but very difficult, and only with a very good reason. Even when one does, every single official document about one gives one's name as "Monsieur X, who changed his name from Y...."  One might as well not have bothered.

Forty per cent of all French surnames are religious, falling into general groupings, as determined by the authors of the Grand Dictionnaire des Noms de Famille (éditions Ambre, 2002)

If surnames have been influenced by religion,  first names have been even more so, and that religious influence was used by the government for its own purposes. Humorous stories abound of parish priests who imposed the name of a favourite saint upon every child, with generations of children having the name Martin or Martine. No priest would baptize a child who did not have a Christian name.
Some names were not permitted at all. The civil government extended the custom of the priests' limiting of names in order to prevent any child having a name from the suppressed language of lower Brittany. Breton names such as Aezhur or Tangi were not accepted by either priest for baptism or clerk for acte de naissance. The parents had to choose another name.
Today, Breton is still not recognized as a language by the French government (update on that) and, though such Breton names as Yannick and Annick are heard, the name police are still in force. A few years ago a friend of ours tried to register the birth of his daughter Pénélope.  The clerk at the Mairie refused to accept the name because it is not in the Bible. Our friend was stunned but possesses a formidable amount of French dudgeon and won the day; so Pénélope she is.

The Republican or Revolutionary Calendar 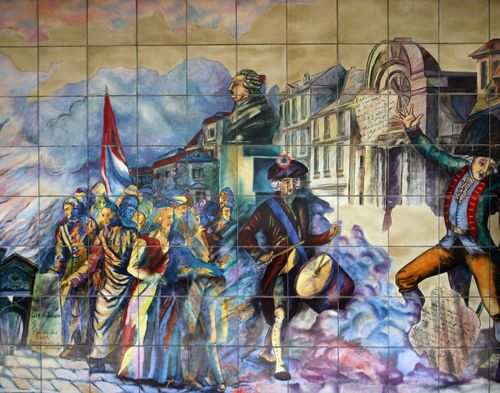 Oh it was a heady time, before the heads began to roll, when idealism was high and the belief that the pure and beautiful logic of the Age of Enlightenment could become a reality. A bare year after the monarchy was abolished and the Republic declared, a sensible and non-religious calendar was proposed to the National Convention and adopted. The more reasonable decimal system was applied as much as was possible.

There were twelve months to the year, but with new names, related to the seasons and agriculture:

Each month had three weeks. A week consisted of ten days, also named, but not so poetically:

However, to compensate for people losing saints' days of the old, Gregorian calendar, each day of the year was named. All of the names had to do with herbs, food, plants, animals, or farm tools. We will not list them all here. Suffice to say that day names ranged from Cresson (watercress) to Violette (violet) to Pioche (pickaxe). Tragically, some children were given these names. (Where were the name police when they were needed? see the post of 9 July, 2009)  Marie-Odile Mergnac writes about the names taken from this calendar in her book, Les prénoms du calendrier révolutionnaire, in the list of books to the right. The article on Wikipedia gives all of the day names and their translation into English. The francogene page on the calendar in English is helpful. The Fondation Napoléon site below has all of the names in a free download PDF file.

A day consisted of ten hours, an hour of a hundred minutes, and a minute of a hundred seconds. This was decimal time. This was reason. Nobody liked it (if only because workers now had three more days between days of rest), and the calendar was less and less used until Napoleon abolished it in 1806.

The calendar was in effect for about twelve years in most parts of the country. During that time, it was used on all birth, marriage and death records, and on all official documents. This can be hard on the genealogist, but there are good conversion tools on the web. The best that we have found in English is on the website of the Fondation Napoléon, which is a pretty cool site all together, if one is a Napoleon fan. With this converter, one can convert a date from Revolutionary to Gregorian and vice versa.

Finally, copies of Revolutionary Calendars can be bought from www.notrefamille.com. Click on "musée virtuelle" at the top, then type in the search box calendrier. 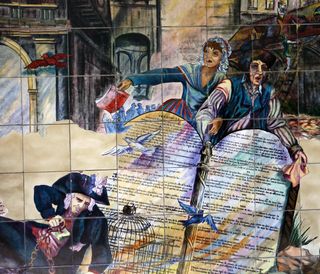 France's biggest national celebration, Quatorze Juillet (14th of July) which Americans like to call Bastille Day, is upon us. The seating is all set up at Place de la Concorde for the dignitaries to view the big military parade that will go from the Tomb of the Unknown Soldier at L'Arche de Triomphe, the length of  the Champs Elysées to Concorde. Scary, fast, black Mirage jets will fly over, as will helicopters, dipping and swooping like monstrous swallows. Everybody will sing the Marseilleise and later, when it is dark, go watch the fireworks at the Eiffel Tower.  In every city, town and village of the country, there will be public fireworks and a party. Great fun.

This is an enormously studied and documented time in history, so we will here give just a couple of suggested websites:

Liberty, Equality, Fraternity - in English, a scholarly and informative site, with maps and songs.

Les Guillotinés de la Révolution Française - in French. This is a private site of extensive research and an exhaustive list of all those guillotined during the Revolution and the Reign of Terror. Given are the names, ages, charges, dates, and residences. Sometimes, relationships to others are also given. The most common charges are "conspiracy", "looting", "counter-revolutionary", but the insanity of the death penalty at the time is grievous to read, as when Gaspard Estralat, of Caumont,  was condemned to death for being a priest, or Marie Hélies, a teacher in Bordeaux, was condemned to death for being a "fanatic".  This site is free. Others have similar information for a fee. If you suspect that any of your ancestors were among the beheaded, we recommend that you start your search here.

The Archives of French Algeria

With great fanfare recently, the Archives nationals d'outre-mer (the National Archives of the Overseas Territories), which is located in the south of France, announced the completion of the digitization of the civil and parish records for all French in Algeria from 1830 to 1904. They can now be viewed online, with a superb clarity.

The French ruled Algeria from 1830 to 1962, when the former colony won its independence after a long and bitter war. During the colonial years, thousands of Europeans emigrated to Algeria. After independence, thousands of French Algerians left the country for France and other parts of the world. Until now, the lack of easy access to these records, (except for those mad fools who wished to spend their magnificent French Riviera holiday in the archives), has been a lacuna for genealogists tracing ancestors in French Algeria. Delightfully, the Algerian records, coupled with the optant records described in the previous post, together can make for some significant discoveries.

To use the French Algerian archives, click on the link, which brings you to a blue opening page.  Click on the acronym IREL (online search tool).

Then, click on état civil Registres paroissiaux et d'état civil numerisés. This brings you to a page with a map. For the time being, the only region's records available are those of French Algeria. Thus, either the search box or the map will finally take you to where you can type in a name.

As a random example, we chose the Alsatian name, Krauth, and typed that into the search box. It brought us two pages of people named Krauth, 34 records of births, deaths, and marriages. 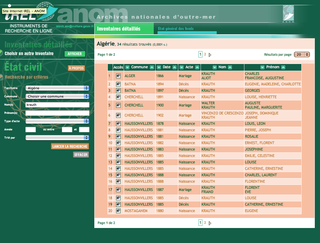 We chose Florent. We found his marriage, in Haussonvillers, 1887, to Eve Friand, and the birth of his children. His marriage record was full of information. 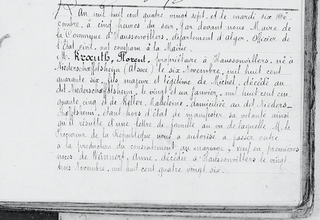 It reveals that he was born in Niederschaeffolsheim, Alsace,  the 6th of November, 1846. That he had reached the age of majority, and was the legitimate son of Michel, who died in Niederschaeffolsheim the 21st of January, 1855. His mother, Madeleine Keller, was still living in the  village and had sent a letter giving her consent to the marriage. Finally, Florent was a widower, whose wife, Anne Wiennert, had died the previous year in Haussonvillers. The following page goes on to give a similar amount of information on the bride, who was born in Moselle. Some of the witnesses were relatives also.

Going now to the site of www.optants.fr, described in the previous post, we can type in the surname, Krauth. The resultant list has 32 optants of the name, three from Niederschaeffolsheim. It would now be possible to order the optant booklets from the genealogical society, CDHF, and to write to the Mairie at Niederschaeffolsheim and ask for a number of further documents.

In the past, one pitied those genealogists researching families from Alsace or French Algeria. Now, they are rather to be envied.